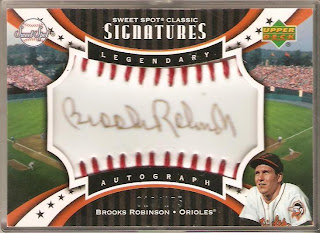 Official autograph cards had yet to make a mark on the hobby when I stopped collecting for the first time in the early 90s. Although the thought of pulling a signed card seems exciting, most of the very few autos I've pulled since I've started collecting again are pretty boring, cards I'd gladly part with for the most part. For example, if anyone's interested in this fine authentic specimen autographed by Stephen Englund just send me an email!

No takers? For those of you who haven't been scared off by this terrible autograph card, this pretty much summarizes most of my auto pulls since I've gotten back into the hobby. Here's what they've had in common:
1. I've never heard of the player
2. I can't find anything interesting about his life or career anywhere
3. As far as I can tell he's never played a game in the majors
4. The card is pretty much worthless to me, both as an investment and sentimentally
5. The penmanship is sloppy (in this case I can make out an S, an E, I guess an L, and what looks like a terrible capital A but is actually some atrocious combination of "and")
6. I don't see any "signs of greatness" here

Maybe that's why I love this Brooks Robinson card so much. First of all, I think the Sweet Spot autos are some of the best autograph cards I've ever seen. They look incredible and I had no idea just how thick they were until this thing showed up in the mail. Does anyone have any information on how exactly these are made? Is that the same material that is used on an authentic MLB baseball?

This is the only Sweet Spot auto that I own. I'd love to pick up some more but the players I'd really be interested in getting (like Nolan Ryan) are a bit more money than I'd care to spend on a single modern card. I've fought with the idea of buying a 2007 Sweet Spot Classic tin but I know with my luck I'd pay $104 for the pack and pull a Dwight Evans or something (I'm a Red Sox fan but I'd still be pissed).

Anyway, I was ecstatic when I bid on and won one featuring one of the best third basemen of all time, possibly the best defensive 3rd baseman ever (how can you argue with 16 Gold Glove awards?). Plus, the card is numbered to 175 and Brooks has one of the neatest and unique looking signatures I've seen (the scan really doesn't do the card justice). It's hard to drop $100 on a pack of this stuff when I picked up this card for about $15. Maybe I'll cave some day, if I do I'll be sure to rip the pack here...

Posted by shoeboxlegends at 9:11 PM

My first autograph pull was an Alex Gordon Bowman. The problem is, this is the Alex Gordon who had a minor league career in the Orioles system.

I agree about certified autographs. They do nothing but create an artificial demand for cards that has increased the amount I have to pay for packs.

Thanks for the comment and for reading my blog! Sounds like you've had a pretty similar experience with autograph cards, I've never heard of the Orioles minor league Alex Gordon. I agree completely about the price of packs, if I could buy packs for a buck less without the chance of pulling an auto I'd definitely do it. Thanks again for the comment.