Let's open a few more packs from my recent re-pack purchase from Wal-Mart's online store, shall we?  If you missed the first two installments you can check them out here, and here. 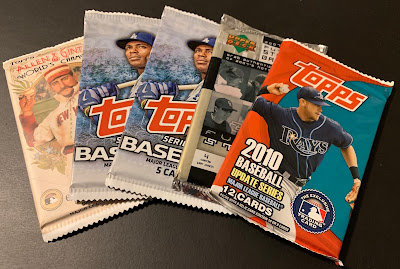 Today we'll bite off another twenty packs, in groups of five.  First up, couple packs of 2015 Topps flagship, a 2010 Topps Update, that atrocious Upper Deck Future Stars set, and some Allen & Ginter. 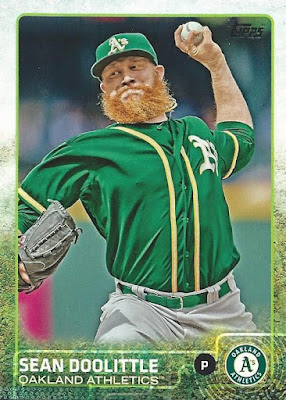 Amazingly, given how picky I am, all four products produced one keeper card for me.  I thought the 2015 Topps set was a breath of fresh air, and I picked up way more of it in pack form than maybe any other set since I returned to collecting back in 2007.  Still have a few holes in my casual set build though, and Sean Doolittle plugs one of them! 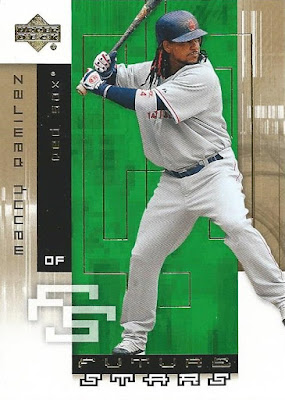 Here's that UD Future Stars set.  This design does nothing for me, I have no idea what Upper Deck was going for here.  I was fortunate enough to pull a new Red Sox card though, and I'll never turn down one of those whether I like the set or not. 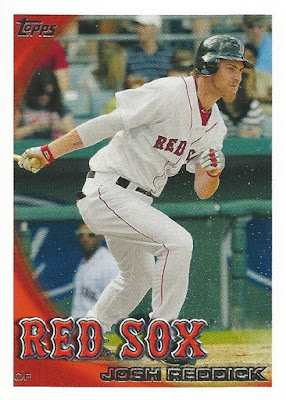 2010 Topps Update produced a Sox need too, in the form of this early Josh Reddick (his rookie card came in the Update set the year prior).  Josh has enjoyed a very solid under-the-radar career, and recently surpassed the 1,000 hit milestone! 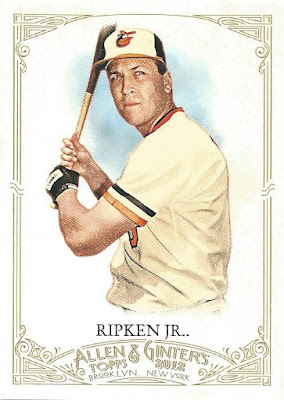 The Allen & Ginter pack had something nice to offer as well, with a Cal Ripken Jr. short print.  I know folks get tired of seeing retired players recycled ad nauseam and I do too, but there are a handful (Ripken, Griffey, Nolan Ryan) that never get old to me. 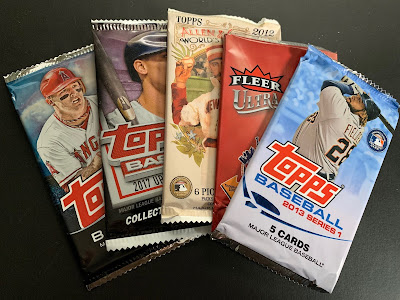 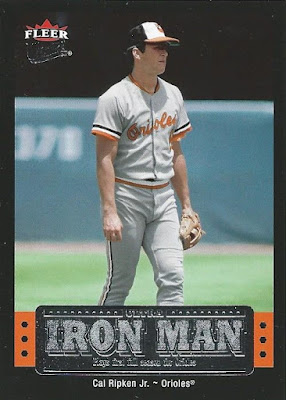 ...but I did pull yet another Ripken card from the Ultra pack, this one from an insert dedicated to Cal. 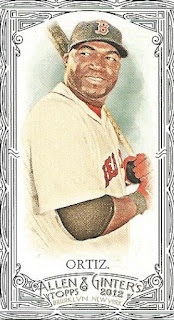 The Allen & Ginter pack wasn't bad either, as I scored this black-bordered mini of Big Papi.  Ortiz is apparently continuing to improve after that shocking shooting, which is great to hear. 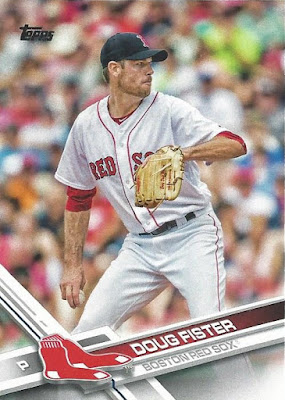 The 2017 Topps Update pack was a perfect one for me, as it yielded two new Red Sox cards with pitchers Doug Fister... 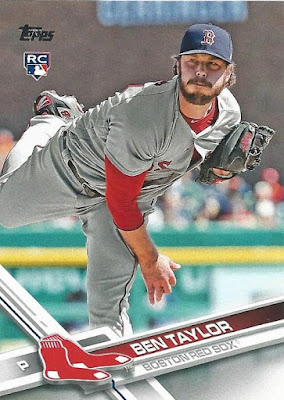 ...and Ben Taylor.  These are my first Red Sox cards of either player, and the Ben Taylor is especially cool given that his Red Sox career consists of just 14 appearances during the 2017 season.  If they put a few more cards like this one in the Update set each year maybe we wouldn't all miss Topps Total quite so much. 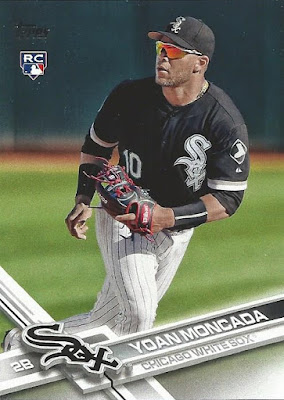 Lastly, I pulled this Yoan Moncada RC, one of two cards of his on the 2017 Update checklist. 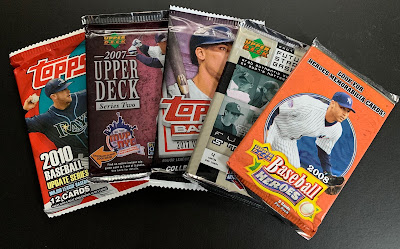 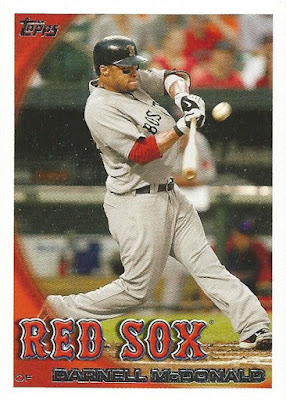 2010 Update, just like the previous pack, resulted in a new Red Sox card though.  Another somewhat obscure player too in utility guy Darnell McDonald.  These little-remembered Boston players have been the highlight of this purchase for me so far. 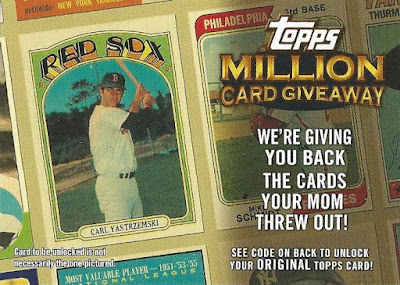 Also got this Topps Million Card Giveaway promotion card, which I guess counts as half of a new Red Sox card since it prominently features a '72 Yaz?  To show just how long I've been at this, here's my blog post from back in 2010 when I actually redeemed some of these codes! 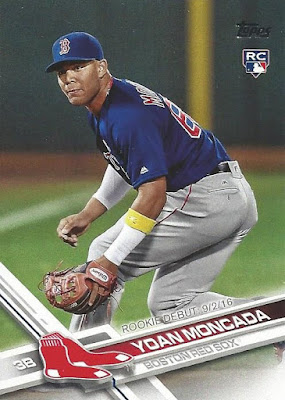 The 2017 Update pack strangely enough yielded the other Moncada RC from the set.  He's depicted with Boston here even though he'd already been dealt and played with the White Sox just because this is referencing his MLB debut at the end of the 2016 season.  Yet another new Sox card for me! 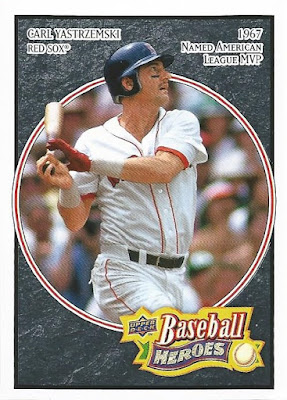 Even the UD Baseball Heroes pack was a success.  I pretty much completed the 200-card base set way back when, but got rid of the majority of them over the past six months as part of my mega-purge of cards.  I did hold onto the Red Sox cards though, and I did not have a copy of this Yaz parallel until now. 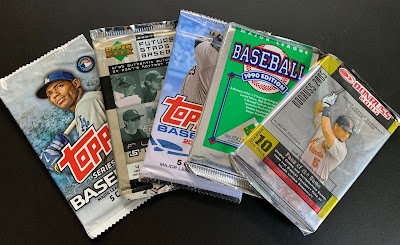 Last chunk of five for tonight.  UD Future Stars, 2013 Topps and 1991 Upper Deck were all total duds.  Did find one interesting card in the 2015 Topps pack: 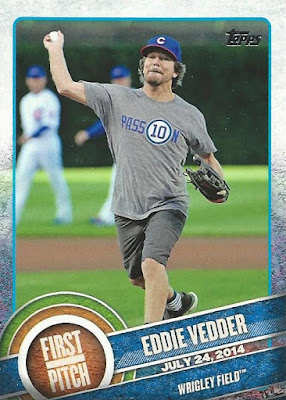 I've talked many times about my Pearl Jam fandom on the blog, and I've even got plenty of Pearl Jam cards in my collection, but this is the only MLB-sanctioned card featuring anyone from the band that I'm aware of.  I already had a copy of course, but this card seems to be in demand.  If I asked you to guess what the cheapest available copy on COMC was going for, would you have come up with a number north of $18?  Me neither, but that's the reality... 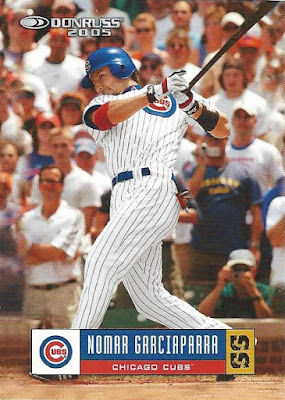 The '05 Donruss pack might have been the best of this re-pack lot so far.  Though it's post-trade, I'm always happy to add a new Garciaparra card to the collection. 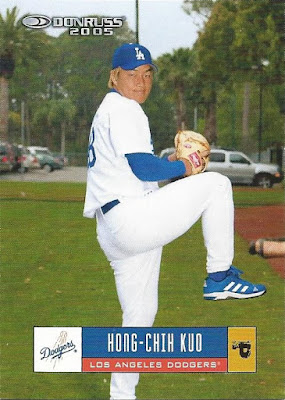 I'm very amused by this one because it has such a '70s feel to it in terms of photo selection.  You just don't see a lot of modern cards with cars or parking lots depicted in the background. 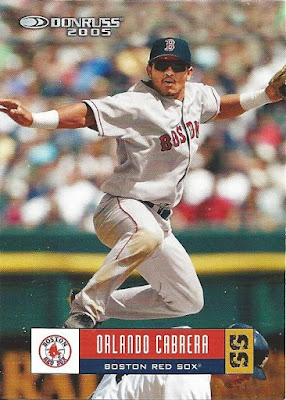 That pair was interesting and all, but the star of the show in this pack was not one... 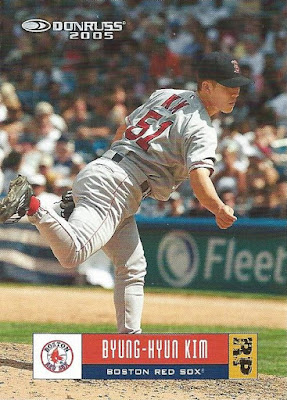 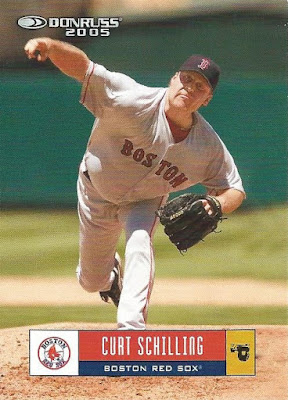 ...but three Red Sox cards, all new to the collection!  From a great era in team history as well, as this set hit the shelves mere months after the breaking of "the curse".

I did alright with this batch, 19 new cards for my collection out of 20 packs.  A dozen new Red Sox cards too, which I'm quite pleased with.  Overall that's 50 keepers for my collection at 61 packs in.  I'm not going to retire on anything that's spilled out of these wrappers, but at about 40 cents a pack the entertainment value has been good so far.

I'll be back with another batch soon.  To all you hockey fans, enjoy the Stanley Cup Finals Game 7 tonight!  Go Bruins!
Posted by shoeboxlegends at 6:29 PM

Lots of cool Red Sox cards here, I'm tempted to buy one of those boxes for myself someday. 2015 flagship is fantastic, IMO the best of the decade by far. And I think Topps Update would be better if they made less subset cards like ASG/Rookie debut/ etc. One card per player within an Update set wouldn't be a popular thing with collectors - who wants less Judge/Acuna/Vlad Jr and more guys like Ben Taylor? But in the absence of a real Topps Total set I'd take that trade.

Griffey,Ryan,Ripken. Top three on the All Respected team?

Looks like a solid batch of packs! My favorite has to be the 2005 Donruss -- you never see singles from that set, let alone entire packs.

Also, when you get a chance, can you email me at nickpecucci AT gmail DOT com? I have some long overdue cards for you -- I've switched emails recently and I think I lost your address. Thanks, sir!