At the height of this past holiday season, just a couple of weeks before Christmas, I learned that Topps had printed up a 2016 Stadium Club Premier League soccer set.  As a soccer fan, and a Premier League fan specifically, I was beyond excited to find out this set existed.  I was pleased to find that hobby boxes were very reasonably priced as well.

A few clicks of the mouse and I had a hobby box on the way, for less than $60 with free shipping.  If you read my blog much you know that opening a hobby box is a rarity for me.  In fact, looking back on it this was only the second (and final) hobby box that I picked up in 2016.  The other one was a Donruss soccer box, not sure what it says about the 2016 baseball and hockey releases that my only two hobby box pick-ups of the year were both soccer. 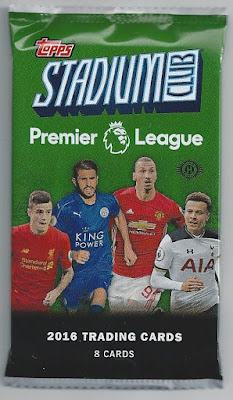 Here's a look at a pack, you get 8 cards per with 16 packs per box.  As far as the cards themselves, they're basically a mirror image of 2016 Stadium Club baseball design-wise: 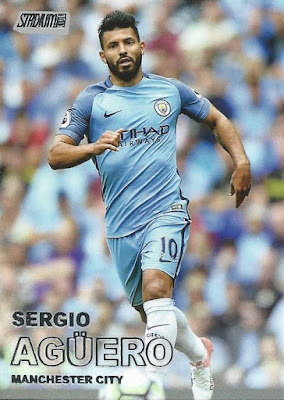 Here's the first card to spill out of the first pack I opened.  Not a bad start either, as Aguero is one of the more exciting players in the league and a player whose cards I've sought out specifically in the past.  As you can see, the design features the same font and full-bleed photography as this year's baseball release. 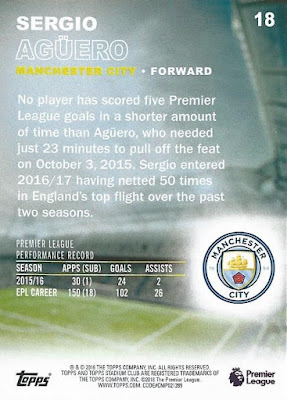 The backs look about the same, too.  One year of stats, a decently sized write-up, and a team logo. 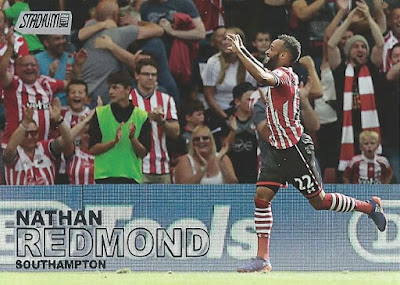 I'm not going to show every card from the box, obviously, but I'll highlight a few of my favorite base cards here as I share my thoughts on the box break. 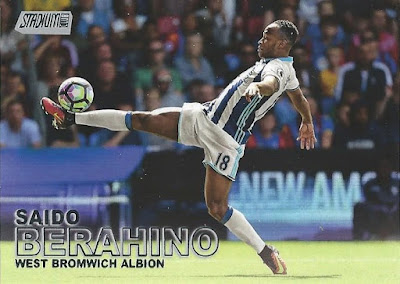 The first thing I'll say right off the bat is that Topps did a good job overall of getting some interesting photographs mixed into the set.  Soccer isn't always the most photogenic sport, and I think some sets suffer from a lack of variety in the photos.  To be fair, you'll find plenty of relatively boring close-up shots in this set as well, but for every one of those you get a more off-the-beaten-path photo like the ones I'm showing here. 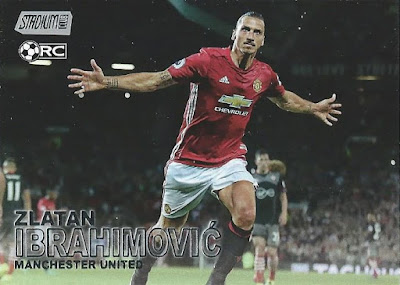 The base set contains only 100 cards, which I honestly think is just about right, especially for the Stadium Club brand's first foray (in some time anyway) into the sport.  There are only 20 teams in the Premier League, so a checklist this size makes it so that the game's biggest stars and most notable names pretty much all received cards.

The checklist is still small enough though that casual collectors and fans aren't going to open a pack where they end up with 8 nobodies and not a single name they recognize.  Best of all, with 7 base cards in the average pack you can complete an entire base set with just one hobby box as long as collation is good (I ended up with a full set from my box).  I absolutely love this, though it does make the concept of ever buying a second box somewhat pointless. 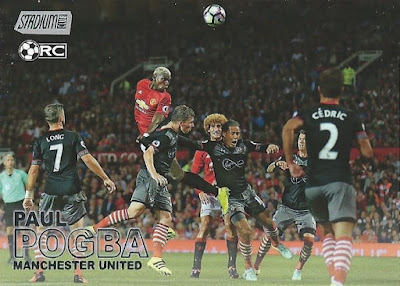 This one might be my favorite photo in the entire set, a lot going on here! 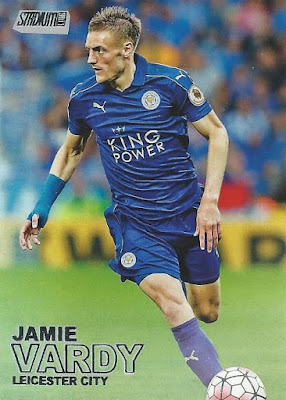 2016 will always be remembered for Leicester City's unbelievable rise to the top of the Premier League table.  There's no way they're going to finish in that spot this year, but they are at least playing well enough to remain safely out of the relegation zone to this point. 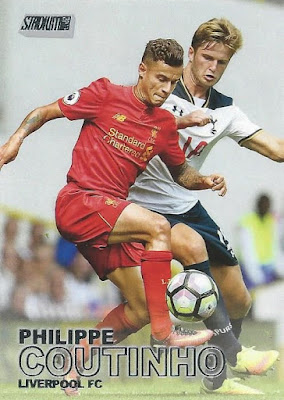 Liverpool is my favorite team when it comes to Premier League, so I was excited to land a new Philippe Coutinho card for my collection.  He's been out with an injury for weeks now, which is rough for Liverpool fans given how talented he is on the pitch. 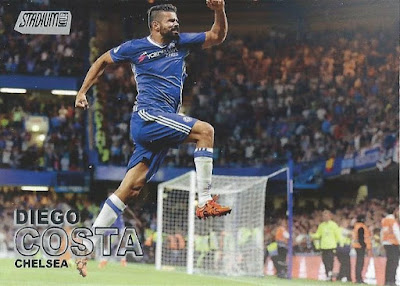 Some of the nicer cards on the checklist feature players in celebration after scoring. 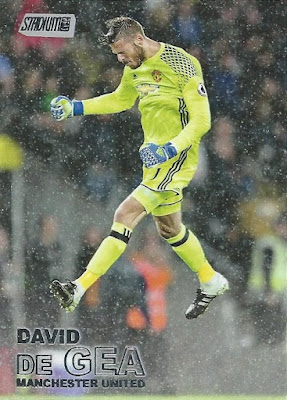 Anyone who watches a lot of English soccer knows that driving rain is far from uncommon, and a few of the photographs did a great job portraying that. 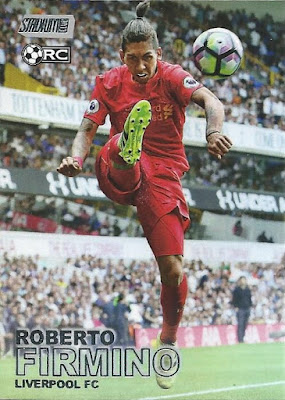 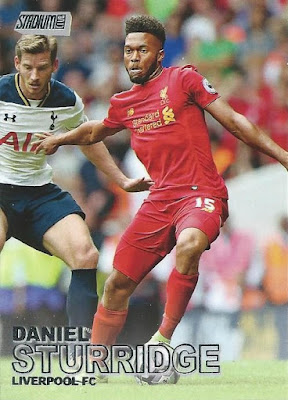 ...and striker Daniel Sturridge dealing with a Tottenham defender. 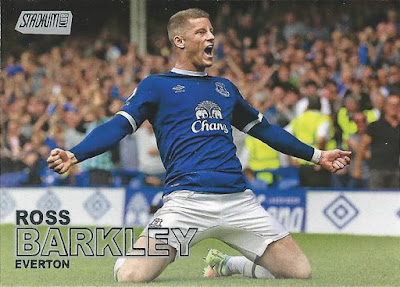 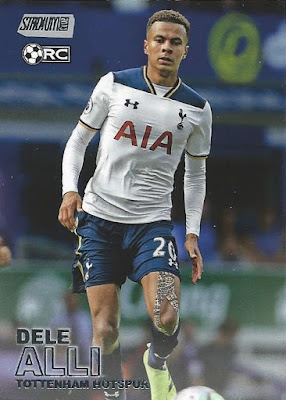 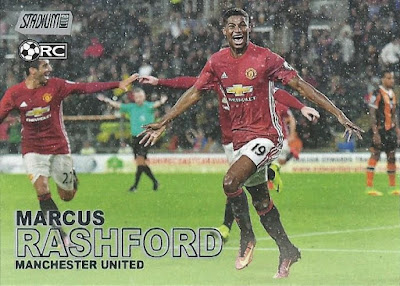 Last couple base cards I'll show now, a pair of youngsters who may be a huge part of Manchester United's future, Marcus Rashford celebrating in the rain... 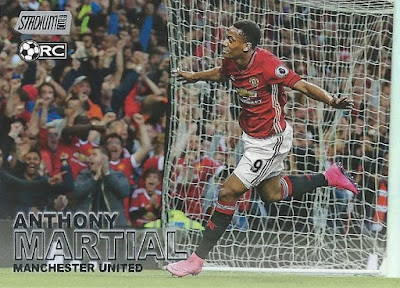 ...and Anthony Martial with a similar, though more dry, version of the goal celebration.  That should give you a pretty good idea of what the base set looks like.  To me, getting the entire set was the most exciting part of the box.  Others may find the inserts and hits more exciting though, so let's take a look at what else I pulled... 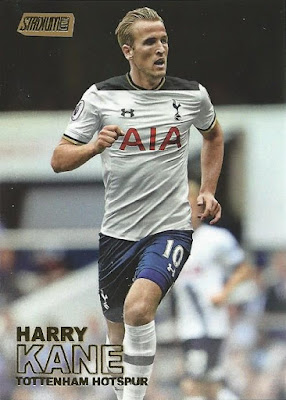 Yes, just like with the Stadium Club baseball release, there are Gold parallels.  I pulled four of these in my box, with the best being perennial scoring threat Harry Kane of Tottenham Hotspur. 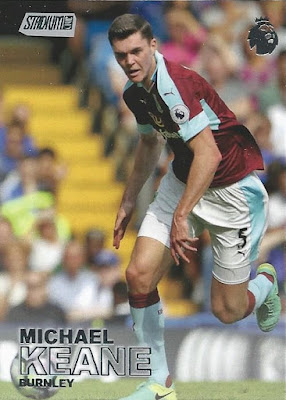 Next up, Premier League logo parallels.  You can see the foil logo in the upper right corner.  That little stamp is the only different between this and a regular base card.  I have a feeling a lot of folks may overlook these when rifling through their boxes.  This Michael Keane is the only one I received in my hobby box. 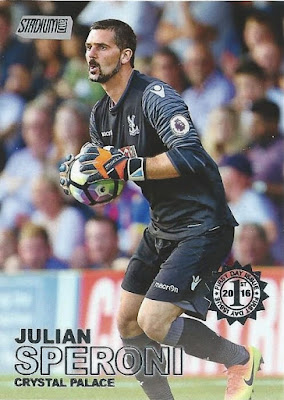 What would Stadium Club be without 1st Day Issue parallels?  These have been a staple of Stadium Club releases since the '90s.  I believe you get one per box, at least I only pulled one.  Unfortunately for me I didn't exactly land the most exciting player, but I was really in this for the base set more than anything else.

That covers the parallels, how about some inserts? 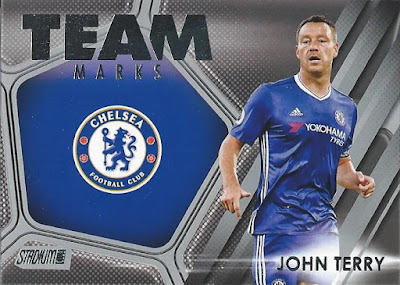 As seems to nearly always be the case with Topps products, I was underwhelmed with the inserts overall.  These Team Marks cards, as the name implies, focus on the team logos.  I pulled four in my box, and they are kind of bland if you ask me. 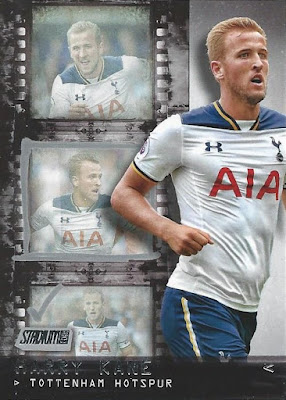 Next up, Contact Sheet, which is lifted straight from the baseball release.  I pulled four of these as well.  Not terrible, but not all that inspiring either. 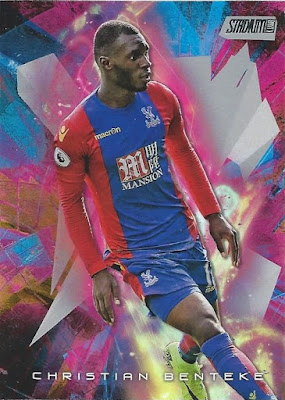 Here's the one insert I actually enjoyed; Golazo.  These are ridiculously bright and vibrant.  I can't put my finger on exactly why, but I think they work well.  My favorite inserts from the set by a long shot.  I only received two of these in my box as opposed to four each of the other insert types. 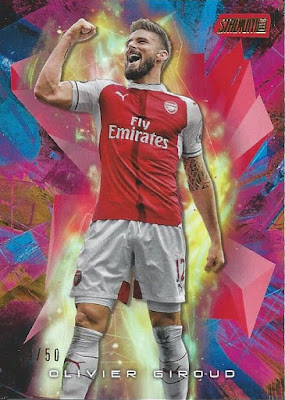 I did get a third Golazo card though, a red parallel numbered to 50.  You can see the Stadium Club logo is outlined in red, where it's grey on the card above this one, and the serial numbering is in the lower left corner.  Olivier Giroud is a great player, and another guy I have specifically sought out cardboard of in the past as well, so I was happy to end up with this card as my numbered insert (seems like you get one serial numbered insert per hobby box anyway).

Speaking of Olivier Giroud, he scored one of the most amazing goals I've seen a couple of weeks ago against Crystal Palace, check it out: 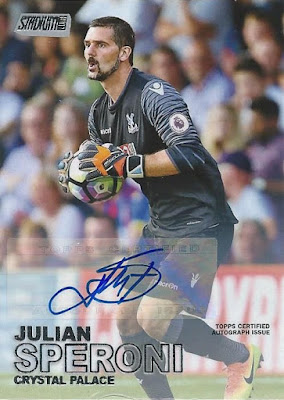 The first was a standard autograph.  Yes, it's the same player I pulled my one-per-box 1st Day Issue parallel of.  I also received Julian Speroni's base card (obviously) and a Gold parallel, giving me four distinct copies of this card.  Shame it wasn't a more notable player.

My second autograph was probably my best card of the box however: 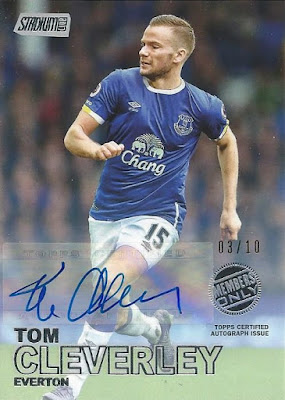 Not bad!  The Members Only parallels are limited to just 10 copies.  I don't know the stated odds on pulling one, but they're certainly a fairly tough draw.  I remember Cleverley, now with Everton, from his time with Manchester United.  He was a member of the 2013 Manchester United team that won the Premier League, and has appeared in over 30 games for England's national team.  A nice surprise to end the box indeed.

So there you have it, 2016 Topps Stadium Club Premier League.  I for one think Topps did a great job with this product.  The precious few officially licensed Premier League sets from Topps in prior years were almost all super high-end sets, and thus very expensive boxes to break, so it is refreshing to see the league represented in a high quality set with great photography at a mid to low range price point.

To walk away with an entire base set, a nice sampling of inserts, a few doubles to trade, two cards #'d to 50 or less, and two autos for less than $60 feels like good value to me.  Apart from all that though, it was awesome to finally be able to acquire my first cardboard of so many of the players that I've watched week in and week out for the past few years now.  Thank you Topps!

Have any of you picked up a box of this?  I think there are even retail packs as well?
Posted by shoeboxlegends at 9:47 PM

Great, great stuff, Shane. So far, I've picked up a single retail pack and I love this product. I'm pretty sure that I'll be following suit and grabbing a hobby box now that I've seen your break. I really want to put together a complete set as well. Thanks for sharing.

It's a sweet set. I bought a couple of packs at WalMart. I got the Rooney card I was hoping for, and a couple of other Man U players including that same Rashford card. I may have to get the Martial. If I didn't have so much on my plate I might be tempted to chase this. Thanks for the post.

I need to get the Tottenham team logo insert. I'm a direct descendant of the original Hotspur the team is named after. That's definitely the team I root for on the very rare occasion I watch soccer.

Nice cards! I'll have to pick up a retail pack if I see any out and about.

I picked up a box for $100.... nice little set.
Your autos were better than mine though.