One of my stated goals at the outset of the year was to make some progress on my 1950 Bowman set.  Let's do that today, with a Red Sox card nonetheless!  This is a card I picked up a long time ago, but if memory (and the Blogger search engine) is correct, is one I haven't shown here on the blog before. 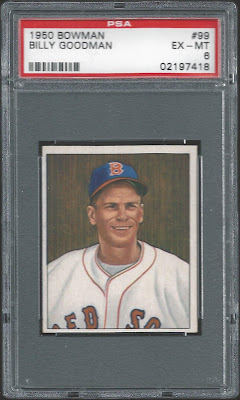 I'm actually really excited to finally get this card added to the project, and the overall count in my set.  Aside from being a solid addition to my Red Sox collection, this one is particularly cool for the '50 Bowman set.  Why is that?  Well, Billy Goodman won the AL batting title in 1950!  It's the truth.  In fact, he also finished second in AL MVP voting that year, losing the award to Phil Rizzuto of the Yankees. 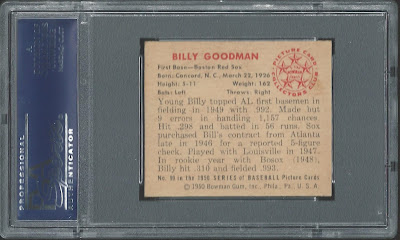 Goodman is regarded as one of the more under-rated and all-around solid ballplayers of his era.  A reliable fielder, he swung a very effective bat as well, finishing with a career batting average of .300, and a career OBP of .376.  That's a hitter that any team would love to have in the lead-off spot.

Goodman was posthumously inducted into the Boston Red Sox HOF in 2004, after having passed away from cancer a couple of decades earlier at just 58 years old.

I'm psyched to have this one in my set, which is now up to 16 cards and counting.  Just a drop in the well at this point, but I'm enjoying picking these up and hope to have a few more to feature before the year is out.

Thanks for stopping by!

Awesome card! Keep chipping away at this set. I hope to see the whole thing on your blog one day :)

Love this set. And I love learning about a career .300 hitter I had never heard of before. Congratulations on picking up #16.