The NHL season is heading towards the playoff stretch, so let's break up this work week with a random smattering of twenty awesome hockey cards on this Wednesday.  Added all of these to my collection proper while scanning and organizing this past weekend... 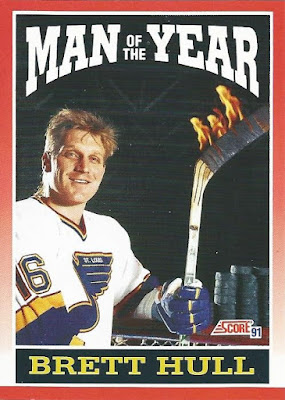 Cheesy?  Sure, but this Brett Hull 'Man of the Year' card from 1991-92 Score really resonated with my 9-year-old self at the time.  The man holding the flaming stick here is currently #4 all-time in goals scored, but it's crazy to think that by this time next year Alex Ovechkin may have surpassed him on that list! 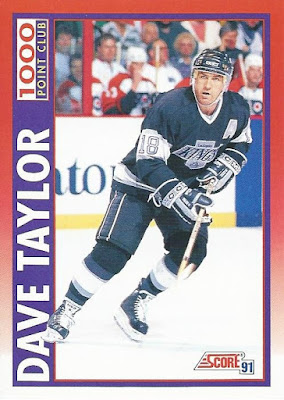 I'm not a Dave Taylor fan in particular.  This probably isn't fair to him, but he kind of always bored me as a kid collector.  I knew he was a good player obviously, but he just seemed to lack any of the flash I was looking for as a youth hockey fan I guess.  1,000 points is pretty significant though, and I love cards that honor a specific moment or achievement like this. 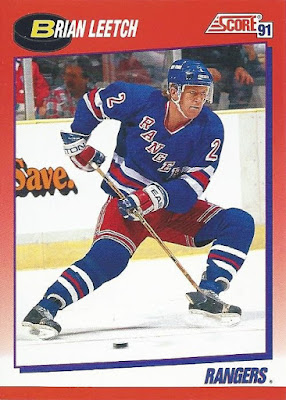 One of the best D-men of his generation.  Always liked this guy a little extra too given that his rookie card was one of the biggest chase cards in the first hockey set I ever collected. 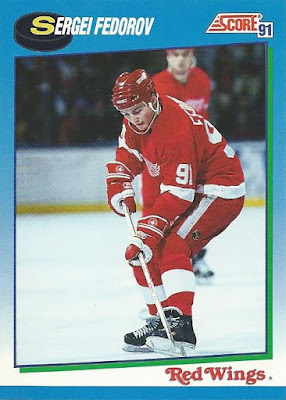 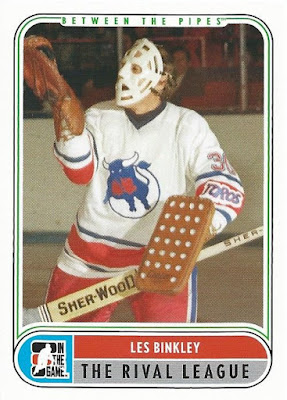 I missed out on a lot of In The Game's offerings, as they were really prominent during the era where I wasn't collecting cards at all.  Of the few that I've picked up since returning to collecting though, the small subset of WHA cards at the end of the '07-08 Between the Pipes checklist are my favorites.  That might be the best look at a Toronto Toros sweater in my entire collection. 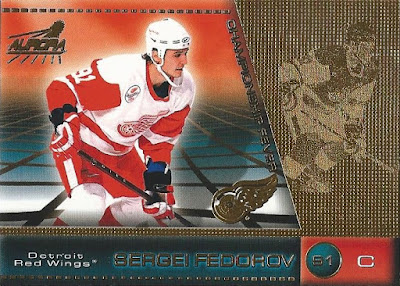 Guess what decade this Fedorov is from?  Yep, the '90s! 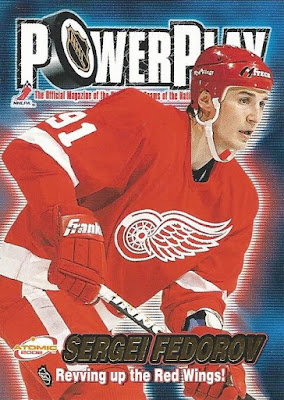 This one, slightly less busy, is from the early 2000s.  In its current state, Sergei Fedorov is the second most represented player in my hockey card collection at 145 cards.  The only man in front of him... 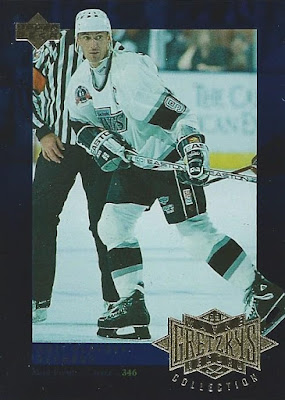 ...is The Great One, of course!  One can never have too many Gretzky cards.  This one's from the 1995-96 Upper Deck Gretzky's Collection insert set that spanned multiple releases that season.  These look better in hand than they do scanned, classy looking cards actually. 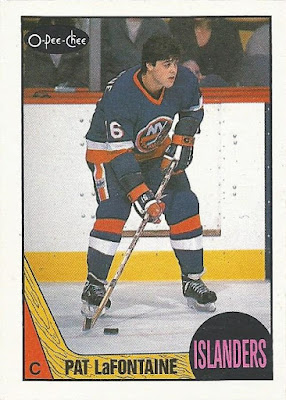 This one came from a dime box long ago.  A dime for an '87-88 O-Pee-Chee LaFontaine?!?!  If I ever stumble upon more stars from this set at that price you can be sure I'll scoop them up as well. 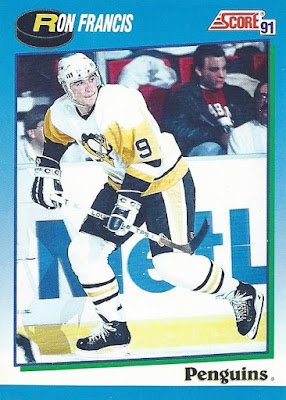 Let's jump forward from that 1987-88 card to 1991-92 for a minute.  I always liked the blue border used on the high series in this Score release.  Ron Francis is another all-time favorite of mine, so I decided to keep this card to pair with the Fedorov above. 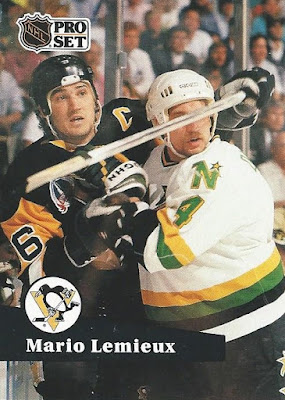 Knock 1991-92 Pro Set all you want.  Yes, it was a drastically overproduced set.  It really did have some unique photographs, though.  While a little awkward, this Mario Lemieux shot isn't far off from something you'd see in an Upper Deck release today (or maybe a Canvas parallel).  Ahead of its time, if you ask me. 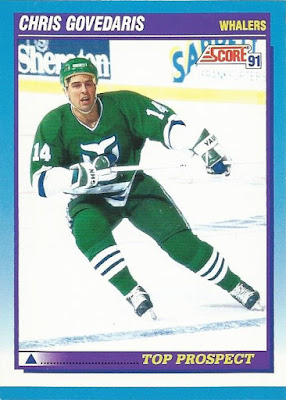 Just one more high-series Score card, this time for my Whalers collection.  Amazing to think I didn't have this one accounted for until this round of sorting and scanning, but there it is. 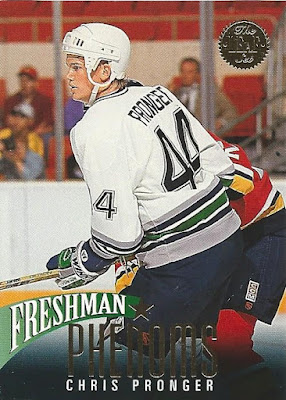 Speaking of which, here's another new Whalers addition, from the Freshman Phenoms insert set in 1993-94 Leaf.  I liked that Leaf release, and it's rightfully given a ton of credit for having one of the best card back designs ever, but the photograph on this insert isn't that great.  Still, a needed Whalers card is a needed Whalers card. 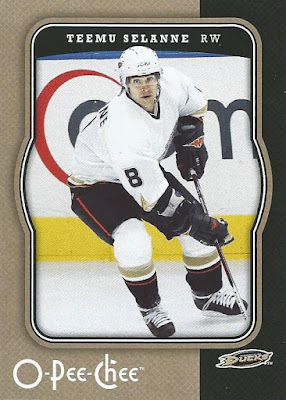 I found a big stack of 2007-08 O-Pee-Chee in a box I was going through as part of my ongoing purge.  Packaged nearly every one of them up to send in my next flat rate box to Billy of Cardboard History.  Just to represent the set in my collection for now though, I held onto two of my favorite players; Teemu Selanne... 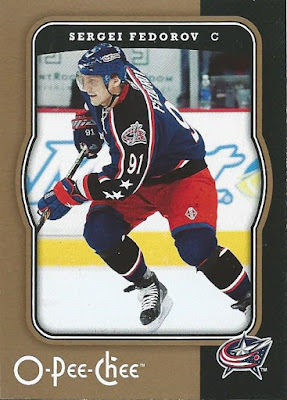 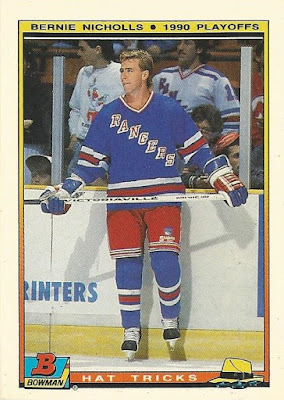 Stumbled upon nine of these Hat Tricks inserts from 1990-91 Bowman, and turns out I needed all nine for my cataloged collection.  Bernie Nicholls here was the best of the bunch. 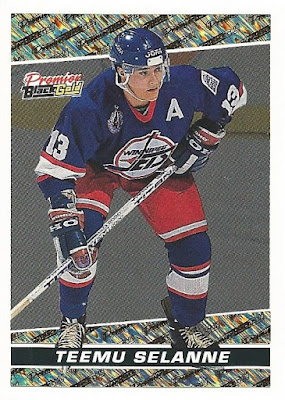 Remember how cool Topps Black Gold cards were?  I can certainly recall these being very coveted cards back in the day. 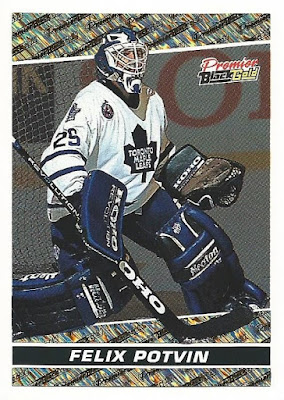 When I stumbled across this trio in a quarter bin a long time ago at a hobby shop, nostalgia got the best of me. 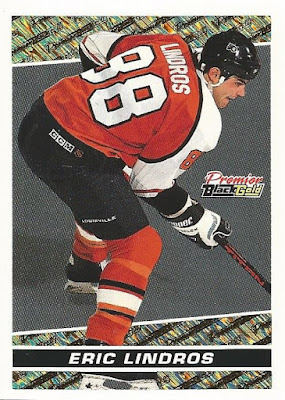 Lindros might be my favorite of the three.  This guy was such a big deal at the time, and ended up a HOFer despite battling some serious injuries over the course of his NHL career. 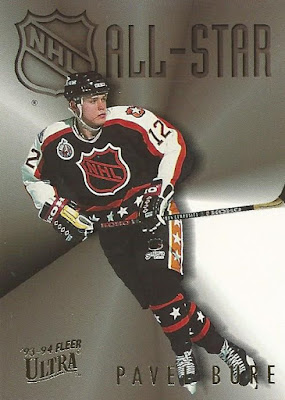 Closing it out is another quarter box pick-up, because as a general rule I'm not leaving any early to mid-'90s Fleer Ultra hockey insert that I don't already own behind in a quarter box.  Simple as that.

So, there are twenty hockey cards that, despite my purging, I just couldn't let go of.  Hopefully you enjoyed at least one or two of them.  Thanks as always for stopping by!
Posted by shoeboxlegends at 2:00 PM

I enjoyed all 20...and I actually have one of them! The Lindros Black Gold which somebody sent me...I can't remember who though. That's pretty unusual since I'm still fairly new to the hockey side. I might have some of the 1991-92 Score cards as well, I don't have them locked in my memory yet.
If I could go back in time and make one design change it would be to make the Score English and Bilingual be two different colored borders. Due to them being so similar, and me being a little scatterbrained, I actually listed some of my Bilingual cards in my English listing, and now I'm not 100% sure which version I have...nor do I remember which box they are in. I'll figure it out someday...

Great stuff! I need to track down some 1991-92 Score bilingual blue borders, and any 87-88 OPC card for a dime is great, especially a HOFer. Guys like Dave Taylor bored me too, along with other 1000-point players like Brian Propp, Bernie Federko, Larry Murphy, and a few others.

The Hull card is a classic. There's a similar Mike Bossy card where he's holding a flaming stick. Btw, I'm cooking up a 700 goals post featuring Ovechkin and co-starring Hull.

There's lots of nostalgia in this post for me, too. I'm sure I bought too many packs of 1991-92 Score (American, Canadian, Bilingual, you name it).

Aside from the nostalgia, those 2007-08 O-Pee-Chee cards are classy looking. Not sure I've ever seen them. And wow, the name Les Binkley sounds like it could belong to a cartoon character.

Seeing that Gretzky insert brought back some great memories. 1995-96 was definitely the peak of my hockey card collecting and I remember collecting those inserts.

I'll have to keep an eye out for that Les Binkley for my Dead Parrot project... and that Lemiuex is going to appear on my blog in the near future (hype, tease, hype)