Surpassing 5,000 Red Sox Cards with Help From a Friend

I'd been saving the latest batch of Red Sox cards I received from my generous hobby friend Douglas of Sports Cards from the Dollar Store to show off on Opening Day.  Since it seems like that may be a while, and since I've already waited many weeks to post these, let's get to them now instead! 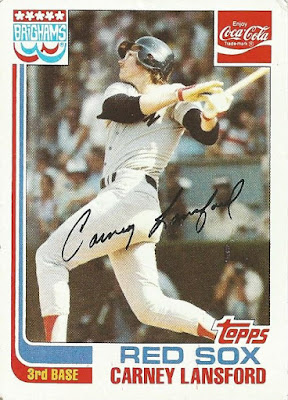 The most prevalent set in the package was the 1982 Topps Brigham's/Coca-Cola regional release.  While I completed the 1982 Topps flagship set long ago, I have precious few of these oddballs. 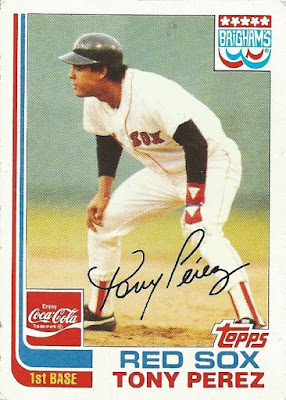 They're especially appreciated given that they are from my birth year! 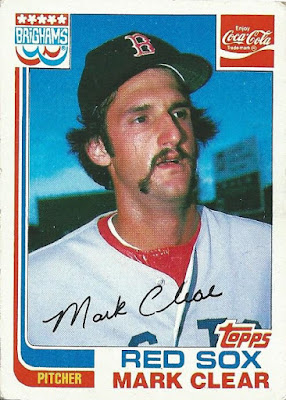 In some cases the Brigham's and Coca-Cola logos are placed at the top of the card... 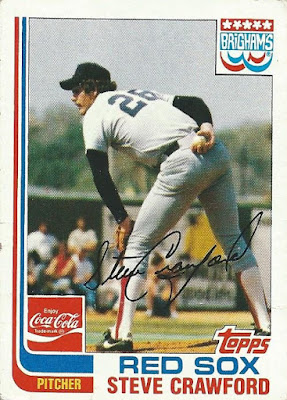 ...while in other cases they're on opposite corners if it makes more sense with the layout of the photo. 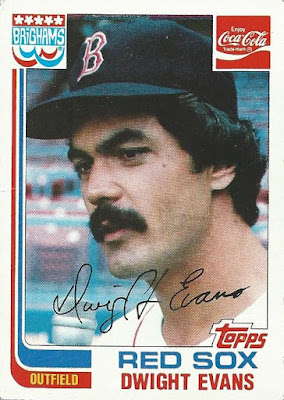 Some good star power here with Dwight Evans.  For whatever reason I seem to be adding a lot of his cards lately as I continue to shuffle my digital collection from Zistle (RIP) to The Trading Card Database. 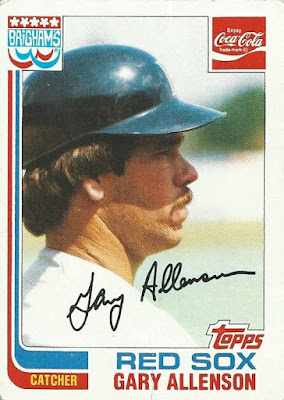 There were seven of these in total in the package, all new to my Red Sox collection. 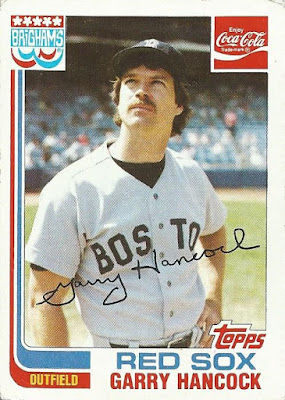 A couple, like Garry Hancock here, were fairly well loved, but I think that gives these oddballs some character and I"m happy to welcome them into my team collection.

These were just the appetizer though as far as Red Sox went in the last bubble mailer from Douglas.  Also included were... 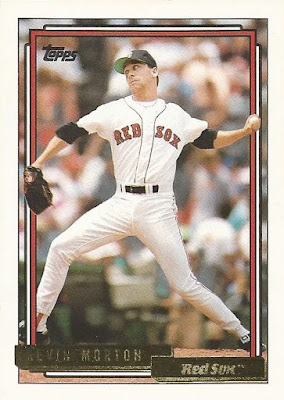 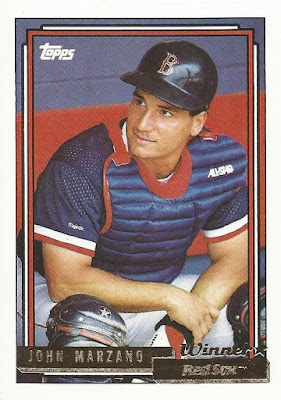 ...and a '92 Gold Winner need as well!  Douglas collects athletes that share his birthday (2/14), and I know John Marzano was one of those players, so I'm guessing this was a duplicate from that endeavor.  Much appreciated! 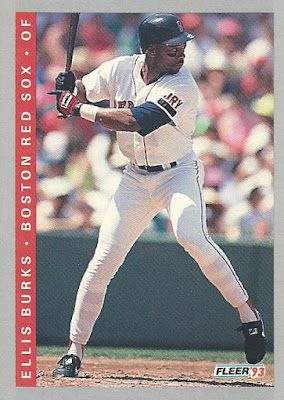 Hitting on some junk wax era needs next, with a pair from 1993 Fleer. 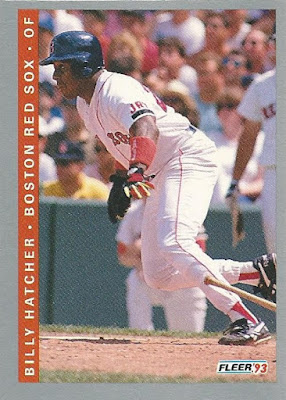 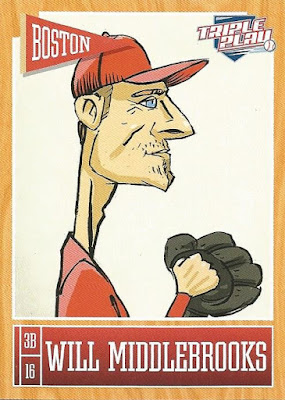 Ah, Panini Triple Play.  Maybe the most despised filler packs found in retail re-packs.  I sort of like these cards though, just because they're so drastically different from a lot of the other stuff from the last decade.  I have a ton of Will Middlebrooks cards, but I only have one where he's got a cartoon giraffe neck. 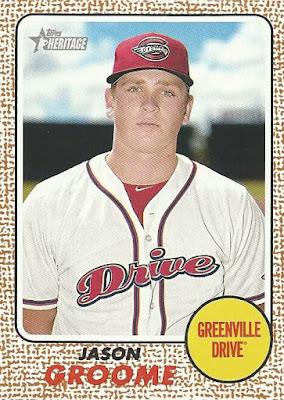 A nice Greenville Drive Heritage Minor League card here.  Groome underwent Tommy John surgery in 2018, and the jury's still out on his recovery.  While he did return last year, it was late in the season and he managed only a handful of innings before the year wound down. 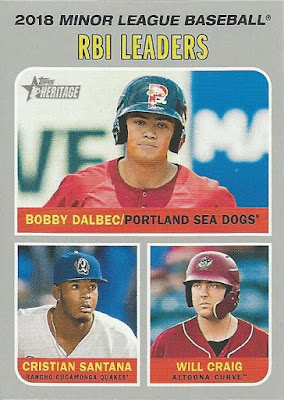 Here's another Heritage Minor League card, this one from last year's set.  This one's pretty cool because Bobby Dalbec is a top-5 prospect in the organization on virtually any list you can find. 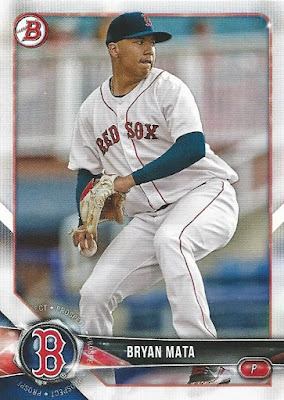 Pitcher Bryan Mata, on the other hand, won't be found near the top of any of those prospect rankings.  He struggled a bit in AA ball last season, but is still just 20 years old. 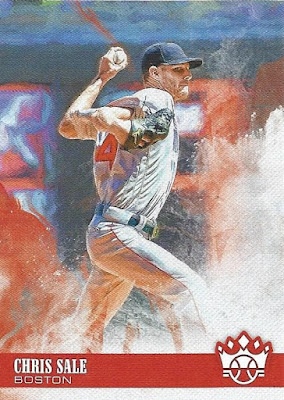 Back to some Major Leaguers now to close things out.  Chris Sale courtesy of Panini Diamond Kings... 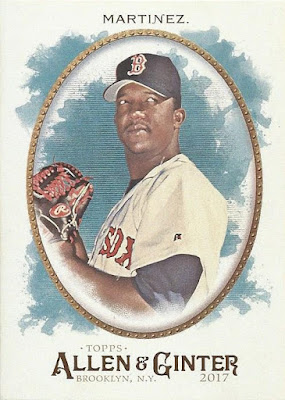 ...and Pedro from 2017 Allen & Ginter.  As I've continued cataloging my collection while stuck in the house here, Martinez has moved into the top 10 as far as baseball players with the most cards.  I should be crossing the 100 unique Pedros threshold any day now. 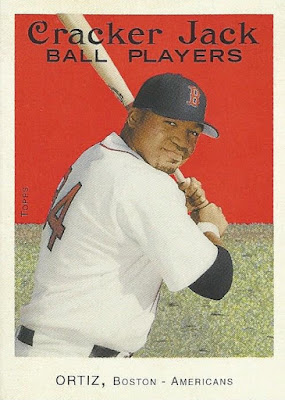 Speaking of those rankings, David Ortiz is currently the #1 ranked player in my baseball card collection, with 198 unique cards and counting.  I rarely if ever go out of my way to search out cards of Big Papi, but as a Red Sox collector he just has so many out there that he's topped the rankings for a long while now. 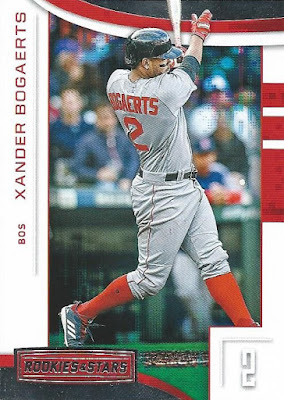 Second only to Ortiz as far as most cards is my current favorite player, Xander Bogaerts.  Douglas supplied my 191st Bogaerts card with this Rookies & Stars from 2019 Panini Chronicles.  Maybe someday he'll surpass David Ortiz... 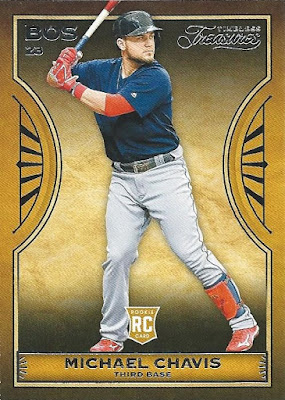 Closing out the Red Sox from this delivery, we have another 2019 Panini Chronicles card, this one from the Timeless Treasures subset.  Chavis showed flashes of brilliance last year, and is one of the players I'm most excited to watch if and when the 2020 season gets underway here.

Douglas, sorry my plan to post these at the outset of the season kind of backfired and ended up being nothing more than a lengthy wait to say thank you.  I truly appreciate these thoughtful gifts!

While entering these into my collection on The Trading Card Database I passed a significant milestone as well, that being 5,000+ Red Sox cards in my organized and cataloged collection!  I'm down to one last 3,000 count box of cards from Zistle that still need to be added to TCDB, and I think by the time I get through that I may be able to hit the 7,000 Red Sox mark.  I guess we'll just have to see in the coming weeks...

Thanks as always for stopping by, and stay inside if you can!
Posted by shoeboxlegends at 9:15 AM

Congrats on 5,000 red Sox cards - the only cards truly worth collecting! ;)

Congratulations on the big 5K! I tried counting my Mets cards a few years ago, but I ran out of gas a little shy of 2000.

I saw Dalbec in the minors this past year, and he seems like he'll be a fun one to watch. If he establishes himsef, he'll probably be one of my "Saw him in the minors" players to collect.

Congrats on 5,000 Red Sox cards! That is quite a milestone!