Grabbed another eight buybacks from the last cheap lot I was able to pick up on eBay to feature here today.  I've gotten quite a few posts out of this lot already, though the stack is now dwindling noticeably.  Let's see how today's eight contestants fare... 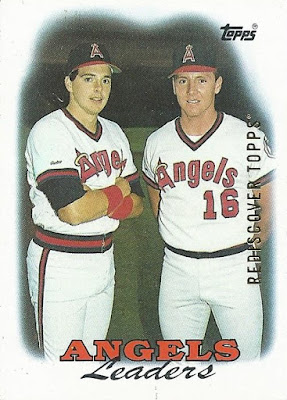 Some nice variety right out of the gate, with one of those team statistical leaders cards from the '80s.  Wally Joyner (pictured at left for those of you who were living under a rock in the late '80s) was a pretty big deal for a short while in the hobby, so this one is a promising contender.

It actually turns out that #381 is a number I need for the franken-set, so this card makes the cut by default.  On top of that, it also completes a new page! 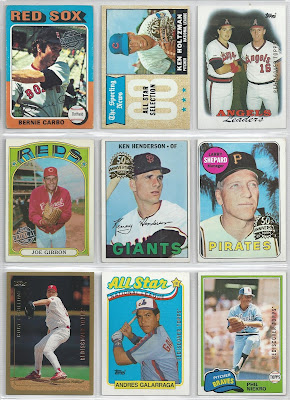 I get so much joy out of completing new pages for this project.  I mean, just look at the variety and some of the stars on this page.  Not a single set is duplicated among these nine cards that call the binder home.  Awesome stuff. 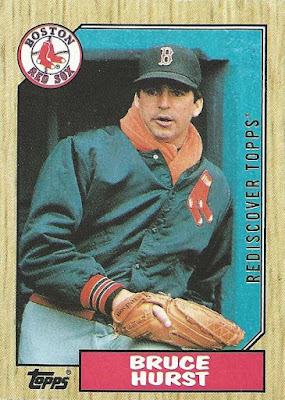 A nice Red Sox buyback is up next, as Bruce Hurst rocks the warm-up jacket and scarf combo on his '87 Topps release.  Bruce was a reliable starter for Boston, making 30+ starts in 9 out of 10 seasons between 1983 and 1992. 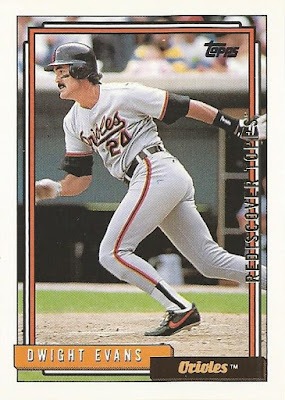 Pitted against him for franken-set glory is former Red Sox star Dwight Evans, looking awfully out of place on the Baltimore Orioles on his 1992 Topps card.  This one's actually a "sunset card" to boot, as the 101 games that Evans played with Baltimore in 1991 were the final MLB games of his career (and the only ones not played in a Red Sox uniform). 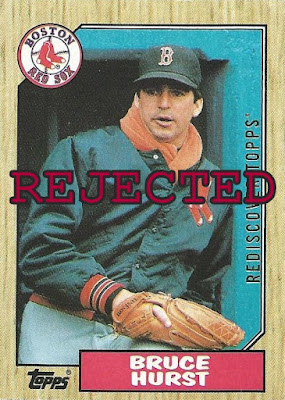 That Dewey is just too odd to oust from the binder, even in favor of a proper Red Sox buyback.  Evans retains his slot, and Hurst moves off to the rejected box. 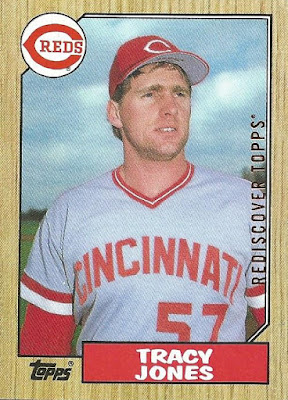 I have to admit that I don't recall outfielder Tracy Jones whatsoever.  He saw action in just under 500 games across 6 MLB seasons between 1986 and 1991.  Sometimes a little bit of luck or fortune goes a long way though in terms of this project, and in this case Tracy is the first #146 buyback I've encountered.  So, though I know nothing about him and it's a relatively boring card, Jones makes the cut!  Likely a prime candidate for future replacement I'd say. 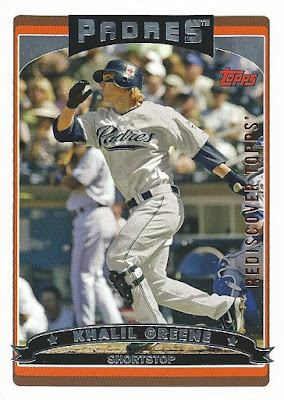 Remember Khalil Greene?!?!  This guy burst onto the scene in 2004, finishing second in NL Rookie of the Year voting (losing out to Jason Bay of the Pirates).  He looked primed for a successful MLB career during his first few seasons with San Diego, but sadly saw things come to an end at age 29 due to severe social anxiety disorder.  Hopefully he's faring well these days. 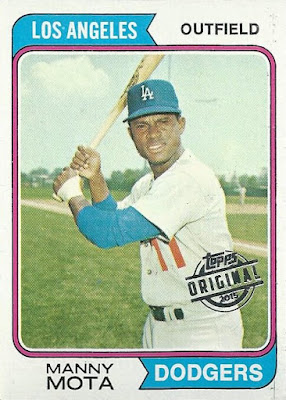 For the second time in recent weeks, outfielder Manny Mota's 1974 card is challenged for its spot in the binder. 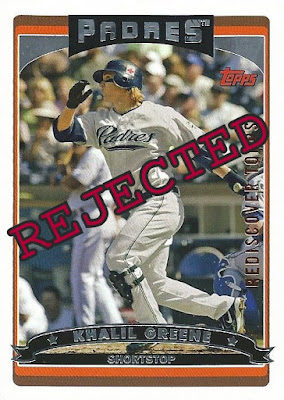 For the second time it defeats the challenger! 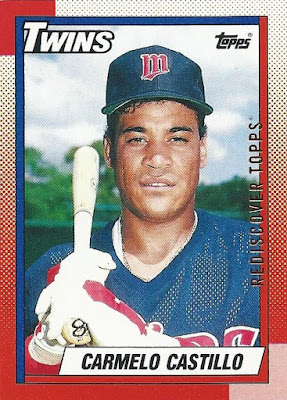 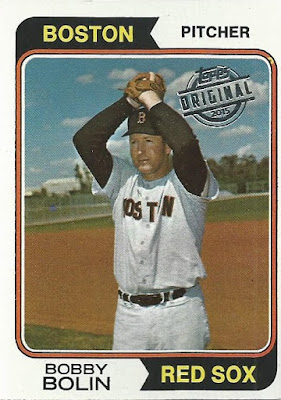 ...and since I already had this awesome Bobby Bolin buyback in slot 427 I can do just that! 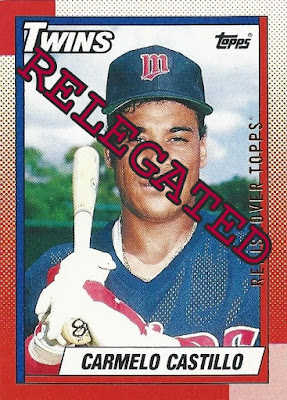 Off to the '90 set with the Castillo card. 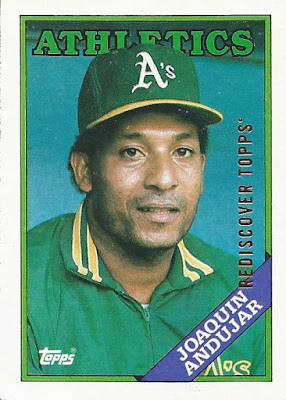 Joaquin Andujar, who was 35 years of age for the 1988 season, had already seen his best days as a pitcher come and go by this point.  He was a multiple-time All-Star, won a Gold Glove, and even garnered a few Cy Young and MVP votes during his career.  The most amazing this about this buyback to me though is that even at this relatively late stage of the project, I'd yet to acquire a buyback with #47 on the back.

Joaquin is in, and amazingly he's the third new number for the franken-set in today's post! 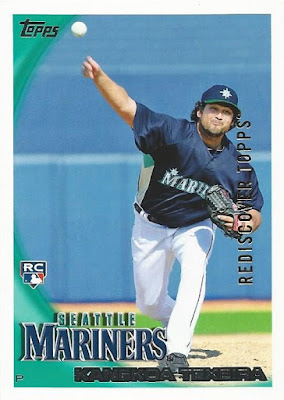 If you don't recognize Kanekoa Texeira by name, don't be too hard on yourself.  While he's still clinging on in the minor leagues, his Major League career consists of 49 appearances across 2010 and 2011, all out of the bullpen for the Mariners and Royals.  An obscure rookie card buyback here to say the least. 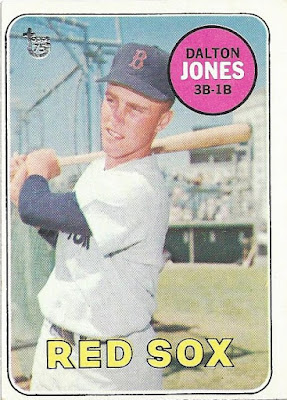 I already have a #457 buyback in the binder, and it's a great one for a Red Sox fan like myself.  Does Texeira stand a chance against a Boston card from 1969? 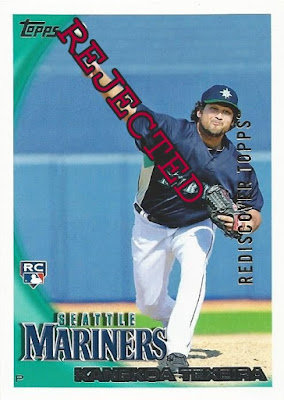 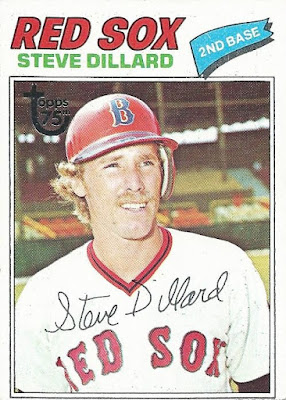 Speaking of Red Sox cards, we'll close things out here with a Red Sox on Red Sox battle.  The contestant is Steve Dillard's 1977 card, done up as part of the 2014 Topps buyback promotion.  When I first stumbled across this one in the lot I figured it was a shoe-in for inclusion in the binder.  Until I turned to the page it would slide into that is, and spotted this card: 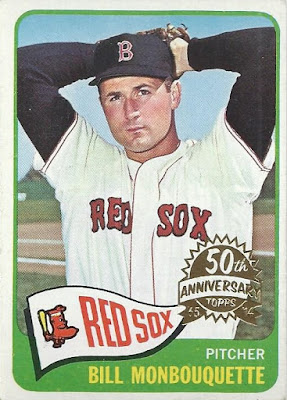 Ouch!  The 1965 set is almost universally loved by collectors, and this Bill Monbouquette is probably one of my favorite Red Sox buybacks in the entire binder at this stage. 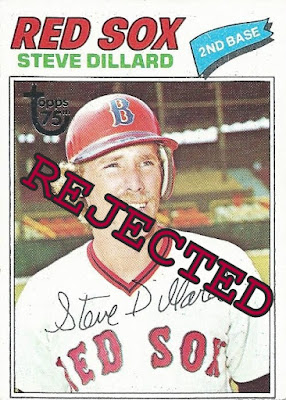 There's no way I could go with Steve Dillard over that beautiful Topps Heritage buyback featuring a member of the Red Sox HOF.

That's a wrap for today.  I'm fairly astounded that I ended up with three new numbers for the set out of just eight hopefuls.  Throw in one new card for my 1990 Topps buyback set as well, and this round was an absolute success as far as I'm concerned.

My next post in this series should get me right to the precipice of 1,500 total buybacks profiled.  Until then, thanks as always for stopping by!

I love seeing those pages get filled, too, and that is indeed a GREAT page. Three 1960s cards, 2 from two of the nicest sets of the '70s, a 1981 Hall of Famer and the only relatively recent card is a guy who should be in the Hall, too. Outstanding.

It's so weird seeing Andujar wearing green. Not even sure I knew he pitched with the Athletics. Anyways... you're making some serious progress. Hope these buybacks keep on flowing into your collection.