An Authentic Goudey in a PWE?!?! 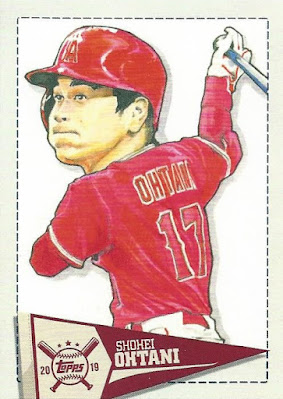 During the pandemic, the idea of bloggers giving away free cards really seemed to take off.  Of the couple dozen card blogs that I read religiously, a good number of them held these giveaways throughout the summer months.  Mostly I stayed away, either because I'm trying to purge and minimize the size of my collection, or because things had been pretty well picked over whenever I stumbled upon a post.

The lone exception for me was a giveaway held by my good hobby friend Nick, of Dime Boxes.  I happened upon this particular giveaway pretty early in the game, and snagged a pair of cards that intrigued me.  First, the Ohtani card I led off with.  This one's from 2019 Big League, and I recently explained that while I can understand why others aren't into them, I'm a fan of caricature/big head cartoons on cards. 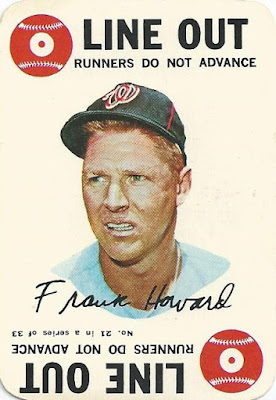 The other freebie that I grabbed was this Frank Howard from the small 1968 Topps Game set.  Decided to make a play for this one because it's in good shape, and while I don't have any active plans to complete the set yet I may decide to someday, based on its small size alone.  I've got just four cards from the release counting this one, but am already better than 10% of the way there! 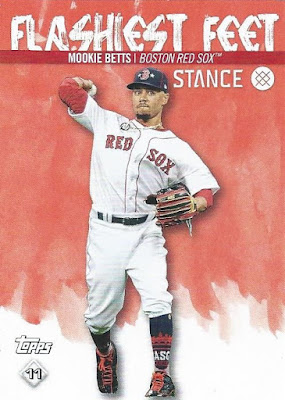 Because Nick is a stand-up guy, and one of the nicest collectors you'll ever encounter, he absolutely stuffed the PWE that he delivered my two claimed cards in full of Red Sox for me! 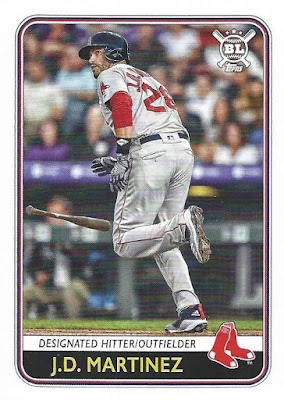 Recently I tore into the first of two blasters of 2020 Topps Big League that I picked up on eBay.  I'm hesitantly and tentatively planning to complete the entire 300-card set, but I'm definitely hoping to acquire all the Red Sox cards at the very least. 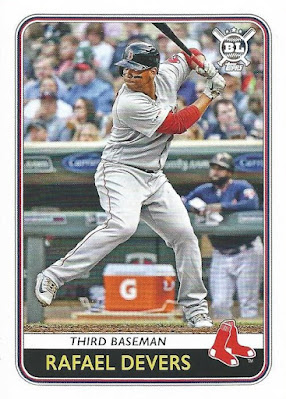 Nick was a big help on that front, including a pair of sluggers who have admittedly had a pretty rough start to this 2020 "season".  Devers had such an amazing 2019 campaign, and became my second favorite active Boston player behind Xander Bogaerts.  Here's hoping he's able to right the ship here in the remaining games. 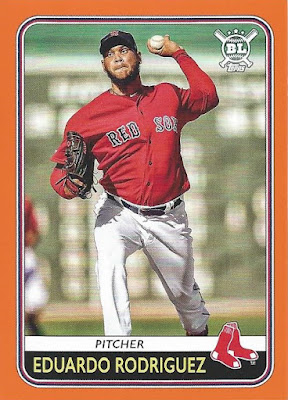 Also got this great Orange parallel of the man who should have been the ace of the 2020 rotation with Chris Sale being out.  Unfortunately, this card is a reminder of just how serious the current pandemic is, as Eduardo has been declared out for the season after suffering a heart condition as a result of having contracted COVID-19.  I believe the long-term prognosis should be a full recovery from what I've read, but scary stuff nonetheless, and an unfortunate loss of an arm the team could have desperately used this year.

Here's to a full recovery for E-Rod! 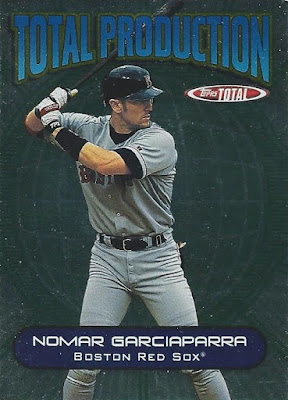 Let's travel back in time a bit now, with an insert from one of those early 2000s Topps Total releases.  When I first encountered this one in the PWE I could have sworn it looked familiar or that I already had a copy.  Consulting my collection on TCDB I found that was not the case, and my Nomar count increases by one here! 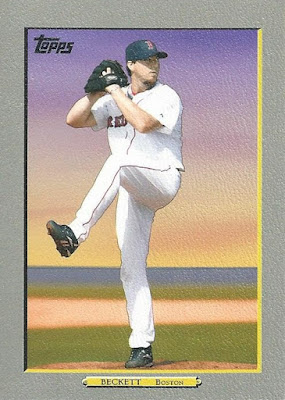 Here's a Josh Beckett Turkey Red insert from a little over a decade ago now.  Don't have a whole lot to say about this one, so this is probably a good opportunity to add my voice to the choir as far as complaining about the new Blogger interface.

I actually had to completely recreate this post from scratch, because for some reason when I added all these scans and clicked the upload button, Blogger decided to put them in reverse order.  Super annoying given that I scan and upload the pics in the order that I want them to appear in for the post.  Normally I'd correct this by switching to HTML view and cutting and pasting the links.  I know just enough HTML to be dangerous, but this was really easy to do on the prior platform because each photo was clearly separated within the underlying code.  Well, in the new Blogger the HTML is jumbled together into a somewhat incomprehensible (at least for a novice like me) mess.  Tried cutting and pasting the scans into the right order from Compose View next, but that introduced a whole host of other problems that I won't get into here.  Eventually, I just ditched the entire thing, started over, and found that Blogger uploaded the scans in the correct order next time around.

I work in IT, so I'm used to technical change being forced upon me and am willing to be somewhat forgiving, but let's hope that doesn't rear it's ugly head again.  If it wasn't for the fact that I was so determined to give Nick his proper thanks, I would have just called it a dead post and walked away.  Too many experiences like this, and I'll consider packing up and taking this show over to YouTube. 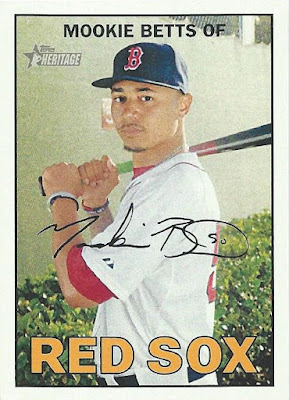 Here's a cool one.  Not just because Mookie Betts was absolutely amazing in his few short seasons with the Red Sox, but also because this is a short print! 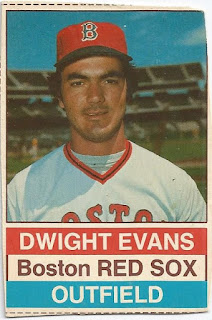 Nick is the undisputed king of oddballs around the blogs, and he certainly didn't disappoint with this PWE.  What's better than a Dwight Evans Hostess card? 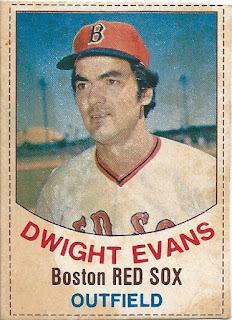 Two Dwight Evans Hostess cards, of course!  Full disclosure, I actually already had a copy of this (1977?) release.  However, this one has so much character with all the staining that I absolutely love it.  So much so that I decided to hang onto both copies, which is unusual for me.  If this card could talk, it would have some stories to tell! 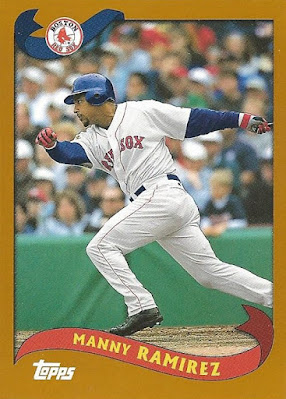 If you saw my post where I highlighted my other recent delivery from Nick then you probably know that this Manny Ramirez is no ordinary Topps flagship card... 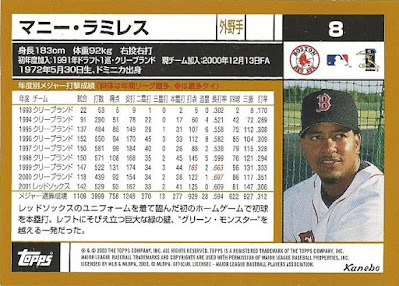 ...it's from the 2003 Topps Kanebo Japan release!  I've got three of these fantastic cards in my Red Sox collection now, all of which came from Nick in the past few months alone.  Amazing. 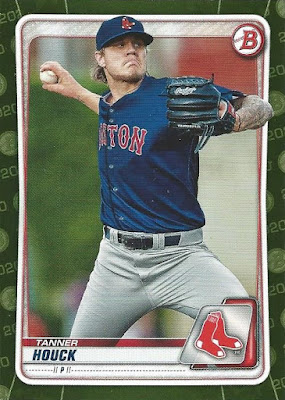 Nick also provided me with my very first in-person look at the apparently-impossible-to-find 2020 Bowman release.  I'm not a huge Bowman guy generally speaking, but will happily accept this Camo parallel of Boston's current #10 prospect according to MLB.com. 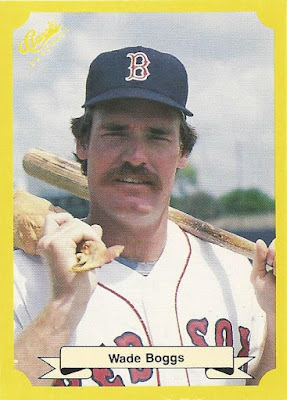 This is one of the greatest 1980s Red Sox cards in existence, period.  I've got a copy already, proudly plucked off of COMC a few years back, but like the Evans Hostess above I'm tempted to keep this one anyway.  If not, I'll have no problem at all getting this sent off to another trade partner.  Every decent Red Sox collection needs a copy of the Wade Boggs rubber chicken card, after all. 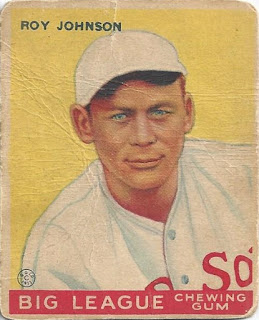 As today's post title indicates, this was easily the most stunning card to fall out of Nick's PWE.  I could be wrong of course, but as far as my untrained eye can tell this is not a reprint.  I'm fairly certain this is a freakin' authentic 1933 Goudey card.

To say that I was sitting in stunned disbelief for a few minutes when I discovered this card would be an understatement.  This card has everything you'd want from a super old vintage card.  Enough wear and surface wrinkling to know it's been around the block, but still vibrant and colorful, and just plain beautiful.  This might be the oldest card anyone has ever sent me by surprise and out of the blue, off the top of my head. 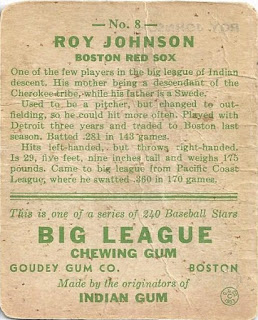 You'd think maybe it would have glue or paper loss on the back, which wouldn't bother me in the least given its age, but nope, nice and clean and totally legible.  Again, I'm absolutely amazed.  You've really outdone yourself here, Nick!

As if stuffing all those cards into a single PWE, and including a 1930s Red Sox card, wasn't enough, Nick also tossed in a pair of buybacks in the hopes that they'd potentially make my Buyback Franken-set!

Let's check them out and see how they fare... 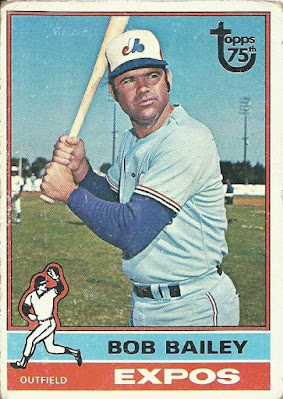 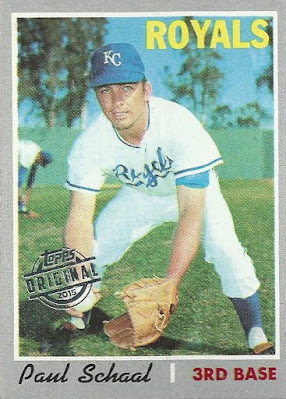 ...and it's this interesting Paul Schaal from the 1970 release.  As far as set design goes, give me '76 over '70 any day.  The thing is though, I've always really enjoyed the photograph on this Paul Schaal.  For some reason the angle makes it look like he's in a little league park or something like that, and you can't go wrong with a bunch of trees in the background on a baseball card, either. 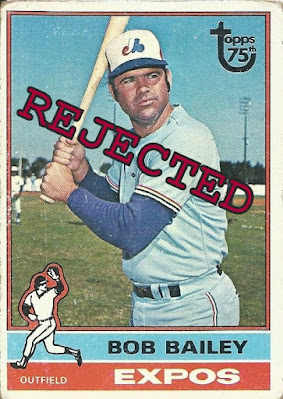 It wasn't an easy call by any means, but I'm reluctantly sticking with the Schaal. 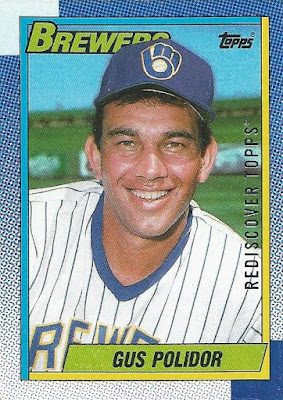 The other buyback that Nick included really got me excited.  Most of you probably know this already, but I'm attempting to complete an entire 1990 Topps set in buyback form.  Honestly this is likely a fool's errand, but I'm determined to see how far I can get with it before flaming out or giving up.

Not only is Gus Polidor missing from that 1990 buyback binder so far, but I'm also confident based on my records that it's a card I don't have in my backlog of "to be processed" buybacks either.  Literally a perfect fit for my buyback collection!  The thing is though, the Buyback Franken-set comes before the 1990 buyback set in terms of priority, so I can only slide this one over to the 1990 binder if I've already got a card #313 in the franken-set. 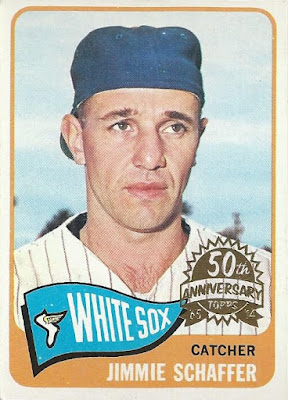 Luckily for me, I already do, in the form of this 1965 Topps Jimmie Schaffer, rocking the backwards cap a full 30 years before Ken Griffey Jr. made it cool. 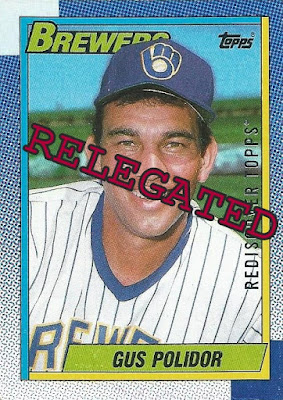 Polidor goes off to the 1990 buyback set, where he belongs.  All is right with the world (of buybacks anyway).

Nick, thank you SO MUCH for the amazing cards.  I'm mystified that you were able to jam all this content into a single PWE, and am so appreciative of every one of these new additions to my collection.  I'm absolutely gonna prepare something to return fire with here.

To everyone else, thanks as always for stopping by!

Voting for the Japanese Manny. Though the 1933 card is really old, so I can see how that would be the more popular choice.

Nick never ceases to amaze! I don't even know what to say about the Goudey.

The 1968 Topps Game is a fun set to chase... Vintage, affordable and just a cool set.

I might have some Big League cards to send your way, I'll check your TCDB wantlists.

Oh, I forgot to mention that WordPress is the same way in terms of HTML... It used to be straightforward, but now it's all nested HTML elements. It's a pain in the ass, and I'm guessing it's some generational change to HTML... or something of a design fad.

A Goudey and the Boggs chicken card?! Nick has outdone himself yet again.

Great stuff. Where the heck does Nick find all of these Hostess cards I see being delivered? I wanna see this stockpile he has. And that Goudey just proves that not all PWE's are created equally.

You "plucked" the Boggs card from COMC? Well played there ;-)