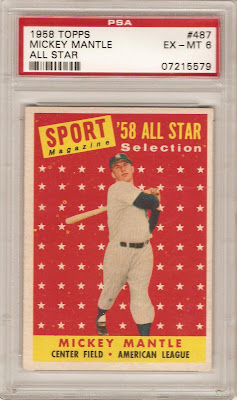 Last day of the year and I managed to sneak my 100th post in just in time! Like I've said before, I may not update this blog as frequently as others, but I'm glad I've stuck with it. 100 posts means I'm updating the blog about twice a week, which is fine with me. For my 100th post I've decided to show off one of my favorite vintage cards, the only Mickey Mantle card that I own.

Growing up, I had a friend whose father really got into collecting cards with him for a while. His dad actually bought about 5 or 6 Mantle cards as an investment (or at least that's what he probably told his wife). I remember going over this friend's house and being in absolute awe that he actually had a few of Mantle's Topps cards. Ever since then I've wanted one of my own. I picked this one up on Ebay a while back for a couple of reasons.

The card was a bit cheaper than most graded Mantle's since it's an All-Star card and not a regular base card, I think it set me back about $100 with shipping. Ironically, the fact that it's an All-Star card is the very reason I wanted it though. 1958 was the first year that Topps introduced All-Star cards, so it's kind of significant as far as the history of trading cards. I love the look of the All-Star cards from this year too, with the cropped photo of the player against a star-spangled background.

Posted by shoeboxlegends at 10:11 AM