A Little Piece of Stick from The Little Ball of Hate

I have a card to show off today that was a total surprise when it arrived at Shoebox Legends headquarters, and seriously made my jaw drop.  It was sent to me by my longtime hobby friend Douglas of Sports Cards from the Dollar Store.  Before I get to that one though, here's the other card that Douglas packaged along with it: 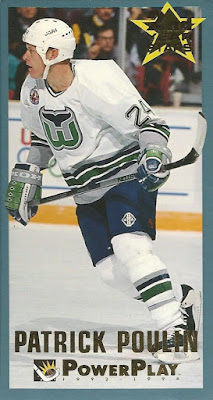 Sweet!  I remember the 1993-94 PowerPlay set fondly.  These were produced by Fleer and are your standard "tallboy" size, similar to the 1964-65 Topps hockey set.  I had a whole bunch of these as a kid, and though they were a pain to store they are fairly unique and cool collectibles.  This particular card is actually from the 2nd Year Stars insert set.

A very nice addition to my Whalers collection indeed, however here's the real star of the show: 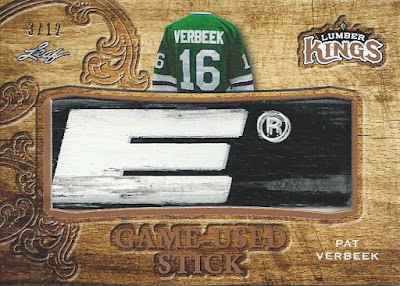 Whoa.  I had no idea this was coming, and I'm not even sure where Douglas found it, but this is one seriously impressive game-used card!  It comes from the 2016 Leaf Lumber Kings set, which I had never even heard of prior to receiving this.  I have one or two other game-used stick cards in my hockey card collection, but nothing that even comes close to this one in terms of size and weight.

This is a rare find as well, in the upper left hand corner you can see that the card is serial-numbered to just /12 copies.  You have really outdone yourself with this one Douglas! 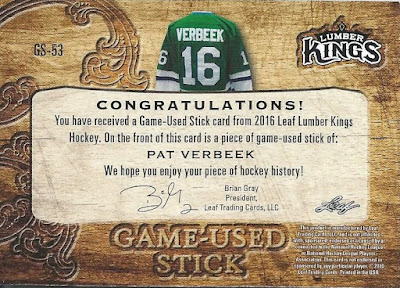 Here's a look at the reverse.  Leaf doesn't have a license to make NHL trading cards, but I'm glad they managed to at least get a nice shot of Pat Verbeek's #16 Hartford Whalers sweater on both front and back.

Verbeek, aka "The Little Ball of Hate", is one of my all-time favorite Whalers, and one of the more under-rated players of his generation if you ask me.  He was known as a pesky and annoying opponent to face off against, the kind of guy you despise on any other team but prize when he's on your own roster.  Not only that, but he could sure put the puck in the net as well.

Verbeek is not a HOFer, but he would certainly be a first ballot choice for the "Hall of Very Good" if it existed.  Less than 50 players in league history have scored 500 goals or more, and Verbeek is one of a very small subset of those players not in the HOF.  He remains to this day the only player in league history with both 500 goals and 2,500+ penalty minutes.  Yup, under-rated for sure. 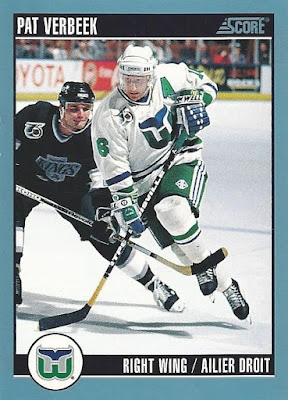 Here's a card from the 1992-93 Score Canadian set (which Douglas also tipped me off to) that shows Pat with the stick model that the piece on the card likely came from.  You can click the image for a larger version, but you can see the word Louisville along the shaft between Verbeek's two hands.  Here's the card again:

This is obviously the 'E' on the very end of the word Louisville, as it has the trailing registered trademark logo.

I really can't state enough just how impressive this card is in hand.  It truly feels as much like a piece of memorabilia as it does a hockey card.  I've had it in my possession for days now and I still smile every time I hold it.  This puppy went straight into a one-touch magnetic holder (needed 130pt holder it's so thick!).  It's easily my favorite Verbeek card, period, and is certainly one of the highlights of my entire Whalers collection overall.

Thank you so much Douglas!  I'm really going to have to send you something nice in return.  In fact, I think I have something in mind already...
Posted by shoeboxlegends at 10:32 AM

Verbeek wasn't with my Rangers for long but I loved the way the guy played when he was there. Nice card!

Very cool piece of memorabilia. Some of the baseball ones are so simple but these and some of the multi-color patches I've seen (on hockey cards) are so very cool.

i know zilch about hockey but do know a sweet card when I see one!

Amazing, to say the least. Verbeek should be in the HHOF.

What else can I say but COOL!

That stick card is sweet!

Very nice piece! I love stick cards when there is "something" you can see. The Blackhawks have been my team since I got into hockey, but I always had a soft spot for the Whale. I played as them a lot on the video games - Verbeek and Geoff Sanderson on the same line!

I bought an ton of 1993-94 PowerPlay as a kid. I remember having lots of trouble storing them as the tall top loaders weren't as easily available.