Couple of shiny cards for you tonight.  I'm running just about on empty as far as mental energy or creativity goes, and it's only Monday.  So, we'll go with the alcohol theme to tie this pair together! 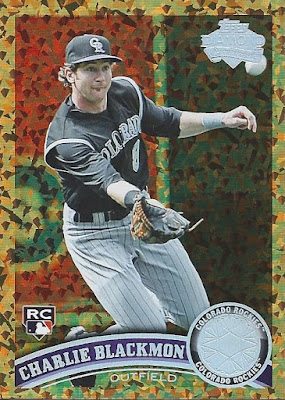 First, the cognac!  This pre-beard Charlie Blackmon RC is from the 2011 Topps Update set.  I usually stick to Red Sox or the Legends variation cards when it comes to these parallels.  I have landed some of the bigger rookies from the Update set though including Mike Trout and Jose Altuve, so when I stumbled across this Blackmon at a good price from a seller I was picking up some buybacks from anyway, I pounced.

Aside from having some epic facial hair, Charlie has carved out a nice career for himself in the time since this card was released.  He's been an everyday outfielder for Colorado for the past 5 seasons now, and has been named an All-Star and Silver Slugger multiple times.  Even finished 5th in NL MVP voting in 2017 thanks to a .331/37/104 stat line, and an OPS of 1.000. 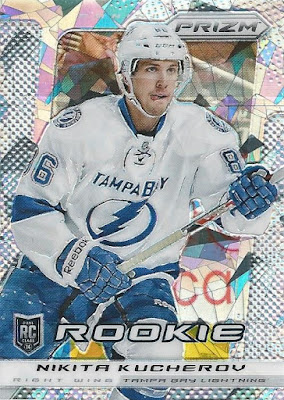 Then we have the cracked ice, in this case a Prizm Cracked Ice parallel that I believe was released exclusively at one of the big Canadian Expo shows back in 2013.  Think of it as Panini's version of an Atomic Refractor.  I paid $15 for this card earlier this year, shockingly as the sole bidder in the auction.  Given that Nikita's Young Guns rookie sells for hundreds of dollars all day long, and that this rookie card is almost certainly much scarcer (not to mention so much shinier!) than that card is, I think I got a real steal on this.

The Lightning had a disappointing playoff run to say the least, capping off one of the best regular seasons in the history of the NHL with a four-and-out sweep at the hand of the 8th-seed Columbus Blue Jackets in the first round.  You can argue that Tampa Bay, and Kucherov in particular, kinda choked when it mattered most, but what you can't argue is the fact that Nikita just had one of the most impressive regular seasons in decades.

Kucherov finished the year with a remarkable 128 points (the final two of which I witnessed in person!), which is the most ever for a Russian-born player.  It was the highest single season point total for any player in the salary cap era, and the most by any player in a season since Mario Lemieux in the mid-'90s!  This was Nikita's 6th NHL season, and he has improved upon his previous year's assist and point totals every single year of his career so far.

Still just 25 years of age, Kucherov already has close to 500 career regular season points.  If he continues to excel (and play on a powerplay that's as strong as Tampa's was last year) it's entirely possible that he could reach Ovechkin or Crosby status as far as career accolades and statistics.  He's got plenty of years left to try to win a Stanley Cup, but that first round defeat must have stung nonetheless.

It will be a lot of fun watching this guy's career unfold over the next decade or more, even more so knowing that I've got this shiny and relatively rare rookie card representing him in my hockey collection!
Posted by shoeboxlegends at 8:12 PM

I wouldn't have guessed that was Blackmon if u gave my all day to guess. I don't think I've ever seen him clean-shaven

I would have had no clue that was Charlie Blackmon. Cool cards .Thanks for sharing.

As a Rockies collector, any time a pre-beard card of Blackmon comes up, it inevitably surprises everybody.

That Blackmon is sweet! Love rookie card parallels. As for Kucherov... that's crazy to think that he's already approaching 500 pts. at 25 years of age.