A Pair of Shiny Rookies

Since my posting of a David Krejci card prior to Game 1 of the 2019 Stanley Cup Finals has been scientifically proven to be a major factor in the Bruins winning that game, I might as well keep up the trend for Game 2.  Ahead of tonight's match-up, here are a pair of sparkling rookies, both of whom have made significant contributions in the Bruins' run to the Finals... 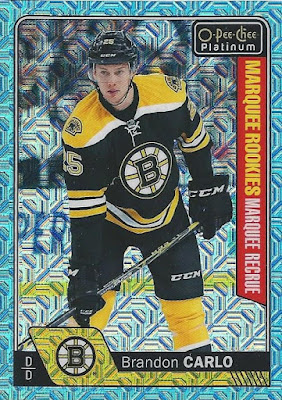 From the 2016-17 O-Pee-Chee Platinum release, here's an "Ice Blue Traxx" parallel of defenseman Brandon Carlo's RC.  Upper Deck's O-Pee-Chee Platinum releases have consistently had some of the best parallels in the hockey card world since the set's inception a few years back.  Thanks to the e-Pack promotion with COMC, these can be had for relatively cheap coin too.  That small remnant of set collector that still exists within me would love to put together an entire set of these, but as it stands right now Carlo is just my third.

Brandon was a really great second round draft choice (37th overall) for Boston back in 2015.  The hulking (6'5") D-man has been a rock on the Bruins back line for the past three seasons now.  Frequently paired with Zdeno Chara, Carlo has eaten up significant minutes and has already appeared in 230 regular season games across his first three NHL seasons.  He may not have the reputation of a Chara, or the flash of a McAvoy, but he's the type of good defenseman that any NHL club needs, and I hope to see him remain in Boston for a good long while. 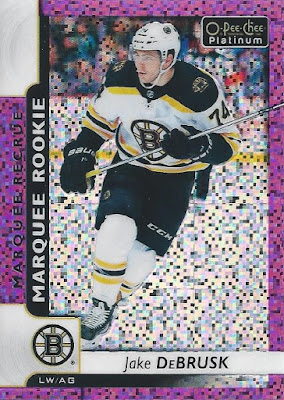 Let's move to the offensive side of the game for today's other sparkling rookie, a "Violet Pixels" parallel of Jake DeBrusk's 2017-18 O-Pee-Chee Platinum card.  It scanned alright, but in hand this one is even more bright and shiny than the Ice Blue Traxx card above.

Jake was taken in the same draft as Brandon Carlo, but in the first round.  He was actually the sandwich pick when the Bruins infamously had three straight draft picks in slots 13-15 overall.  DeBrusk is the only one of those three to pan out so far, and he enjoyed a breakout year in his second season with 27 goals in just 68 games played.  As a fan I'll say that he does, at least to me, seem to disappear at times, but his breakout speed is so exciting to watch.  When he's on his mark, he's a scoring threat just about every shift on the ice.

So, there you have it, a couple of bright young Bruins cards.  Let's see if the B's can bring the same energy tonight that they did in the second two periods Monday night and ride it to a 2-0 series lead.  Go Bruins!
Posted by shoeboxlegends at 9:29 AM

That is a shiny pair of Bruins. Hope they continue to shine tonight.