I mentioned recently that I've really been enjoying the 1955 Topps baseball set.  With just 206 cards on the checklist and no Mickey Mantle it's a tempting set to chase, but Clemente and Koufax rookies make that unlikely for me.  In the meantime, I'm enjoying what "no-name" guys I can scrape up on the cheap.  My last COMC order contained a few of them, here are five of those for your viewing pleasure... 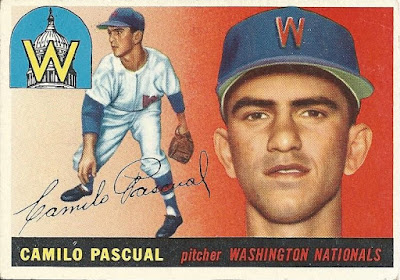 First we have the man who was described by the great Ted Williams as having "the most feared curve ball in the American League", Camilo Pascual.  Love the great Washington Nationals logo here.

When I was a kid, I didn't care much for this set.  I think the fact that the cards are over-sized bothered my OCD some.  I've grown to love both this set, and its sister '56 set, as I've gotten older though.  I like that the fronts have plenty of room for both a portrait and an action shot. 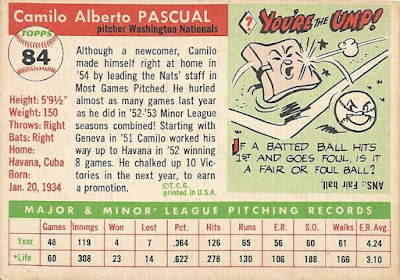 The backs are just amazing.  Pascual has my favorite cartoon of today's batch with that awesome drawing of first base repelling a ball. 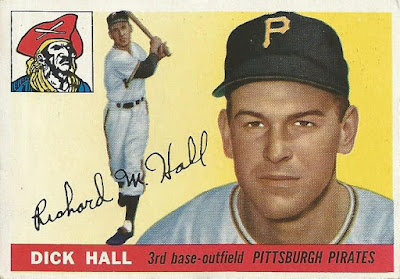 Dick Hall is noted as a third baseman/outfielder on his card, but he'd been seeing some innings on the mound by the time this card hit shelves.  He actually became much better known as a pitcher later in his career, and was on both the 1966 and 1970 World Series champion Baltimore Orioles teams. 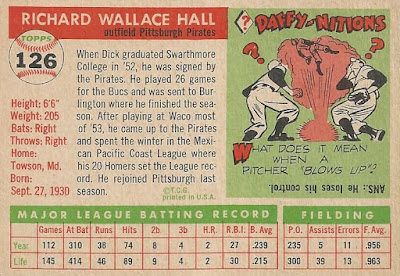 I think it's cool that this card came out just before he'd converted to pitching, no real mention of it on the back anywhere. 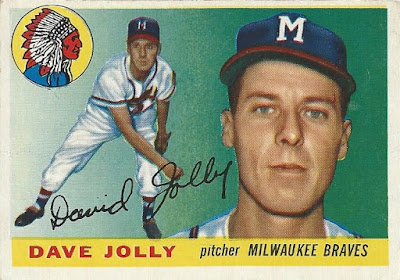 Dave Jolly pitched for the Braves for a few seasons in the mid-'50s, and that was the extent of his baseball career.  He passed away tragically, and far too early at age 38, due to complications from a brain tumor.

With all the controversy around certain franchise names the past few years, I'm not sure Topps could get away with this logo on a 2019 card? 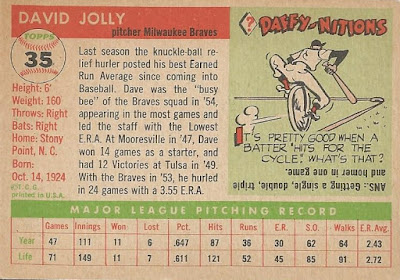 I love that Dave is described in the write-up as the "busy bee" of the Braves squad. 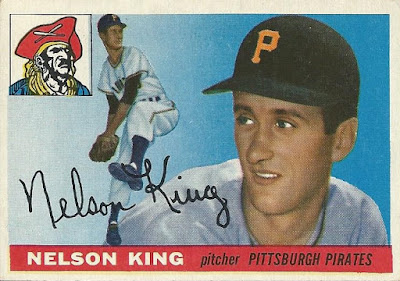 Nellie King played a few seasons of Big League ball, and then did quite a few more as a member of the radio broadcast team for the Pirates after hanging up the spikes.  You can really get a sense for how tall (6'6") and lanky (185 lbs) King was in the action shot there. 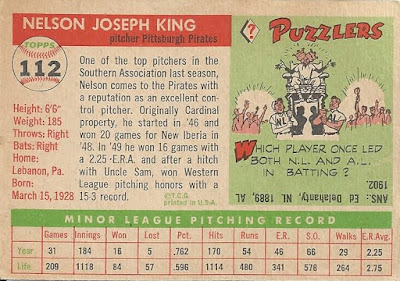 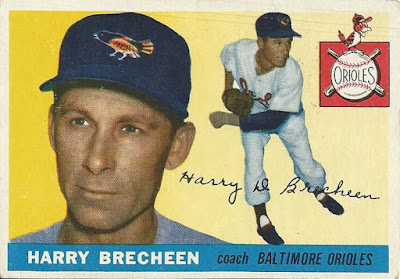 Last card for today, coach Harry Brecheen of the Orioles.  Harry is of course known for his stellar career as a pitcher with the Cardinals during the 1940s.  He was an All-Star more than once, and was absolutely clutch on the biggest stage in baseball for St. Louis, dominating in his World Series appearances. 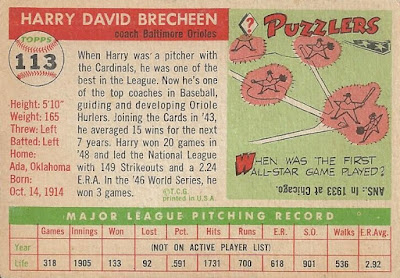 I have one or two cards of Harry's from his playing days, cool to have a coach one to accompany them.

This set is not only fun, but a good one to collect on a budget as well (at least the commons, anyway).  These five are in great shape as far as I'm concerned, and set me back between 75 cents and $1.50 each, with the lot of five adding up to less than $6 total.  I'm now at about 20% of a complete set, with 41 cards in my collection.  I've certainly got a few more to add and post as well.

Thanks for stopping by!
Posted by shoeboxlegends at 11:00 AM

'55 kind of gets overshadowed by the '56 set that came after it but it's pretty spectacular in its own right. Lots to love in this little group.

Right now 1970 and 1972 are the sets that I'm accumulating but not trying to complete, but I might have to give 1955 consideration as a set to semi-go-after... I should, at least, give the Orioles team set a go; maybe after I complete my current vintage O's projects.

I had no idea that Dick Hall started out as a position player, much less enough of one to have a card! I might have to add that bad boy to my wantlist.

I think Topps would "win" any legal battle today with that old Braves logo, they just don't want the hassel that might but shouldn't come with it.