I've got another box of 100 singles on the way from COMC, so I need to clear some space in my card chest before those arrive.  I don't have the time or motivation to tally what I paid for these to do an official "COMC Blaster" post, so instead here's just a random smattering of some of my pick-ups from over time on the site... 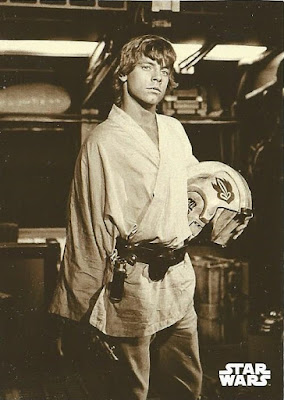 Every once in a while I like a random Star Wars card, and this sepia Luke Skywalker from a recent set looked interesting to me.  If memory serves it was maybe around 75 cents.  This is exactly the type of purchase I refrain from these days in an attempt to be more organized and goal-oriented, but I actually bought it over a year ago now and just got around to scanning and adding it to my proper collection today.  Still, a fun card. 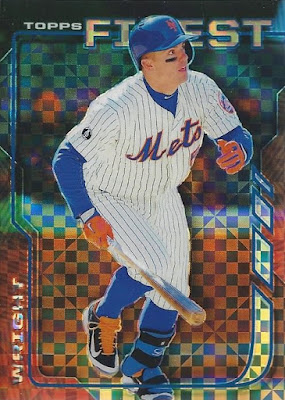 Speaking of trying to stay more focused and goal-oriented in my collecting, I'm still plugging away in my attempt to complete the wonderfully colorful 2014 Topps Finest set in X-Fractor format.  Aside from maybe the original Finest set in 1993, or maybe the sophomore '94 effort, I think this is as good a set as there is in the entire long-running Finest line. 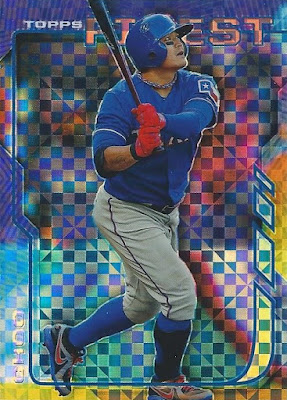 The X-Fractor treatment bumps the already colorful and shiny cards up another notch.  With this pair of David Wright and Shin-Soo Choo in hand, I'm at 46 out of 100 of these, nearing the halfway point.  I've got a couple big cards left to track down still out of the 50+ that I'm missing, but I'm determined to finish this one off someday. 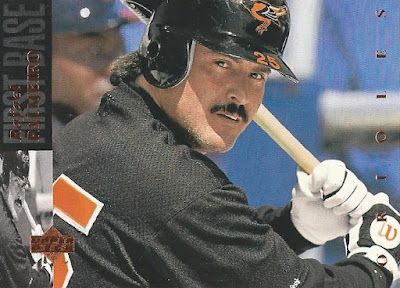 This '94 Upper Deck Palmeiro was grabbed with a future "Stat Kings" post in mind.  Not an amazing card by any means, but I needed a '94 Palmeiro and it fit the bill for cheap coin.  You'll see this one again on the blog someday if I ever get around to that post. 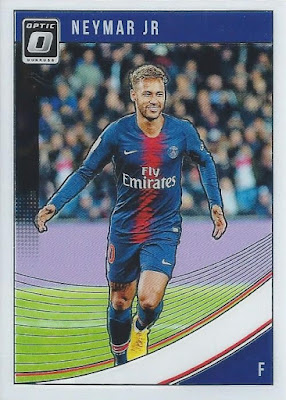 I don't buy many soccer cards these days, though I do enjoy watching English Premier League (and have especially enjoyed watching my favorite team, Liverpool, win each of its first four matches this season!).  When I stumbled upon a small grouping of shiny Donruss Optic cards at an extreme discount a while back, I hand-picked a few of my favorite stars.

Neymar doesn't play in the EPL, but is genuinely recognized as one of the top players on the planet. 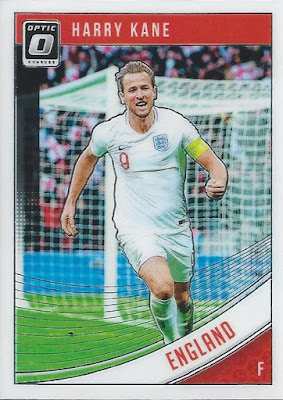 Harry Kane is a goal-scoring machine for Tottenham Hotspur in the EPL.  These past few years they always seem to finish in or around the top 4 in the league, but haven't truly threatened to win a championship just yet. 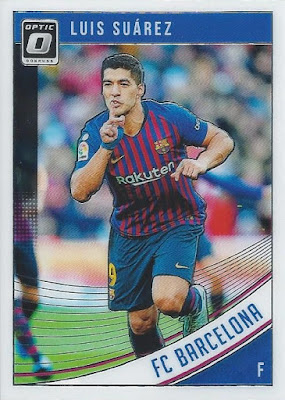 Last Optic soccer card, former Liverpool striker (and ear-biter) Luis Suarez shushing the crowd after presumably finding the back of the net.  I won't chase many, if any, more of these, but they're a fun and inexpensive addition to my soccer binder/collection. 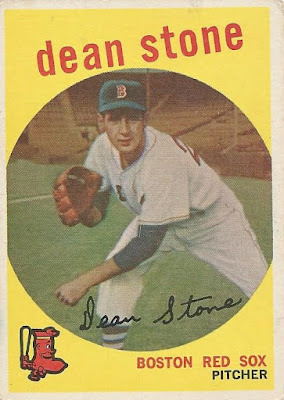 Next up, some very yellow additions to my 1959 Topps baseball set quest.  A new Red Sox card in Dean Stone... 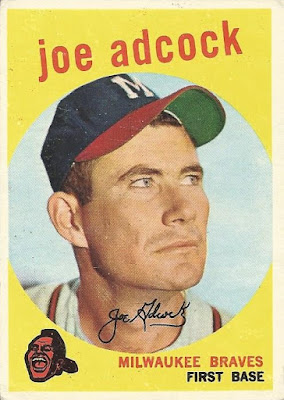 ...the great Joe Adcock, looking pensively off into the distance... 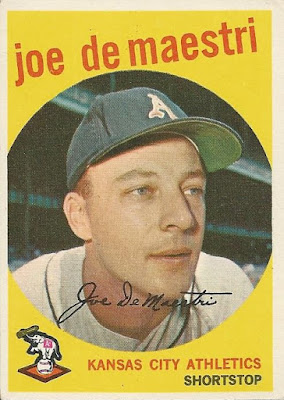 ...and KC A's shortstop Joe DeMaestri, nicknamed "Froggy", bring my total number of cards for this release up to 314.  Still missing a lot of big-name stars, but nonetheless it feels great to be well past the 50% mark with this quest. 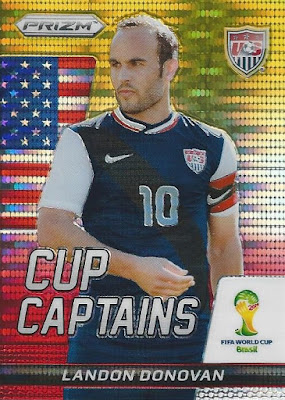 One more soccer card here.  I'd say my favorite modern soccer sets, period, might be the two Prizm World Cup sets that Panini produced for the last two World Cups in 2014 and 2018.  When I came across this Yellow & Red Pulsar Prizm parallel of Team USA's captain Landon Donovan from the 2014 set for mere pocket change, into my cart it went! 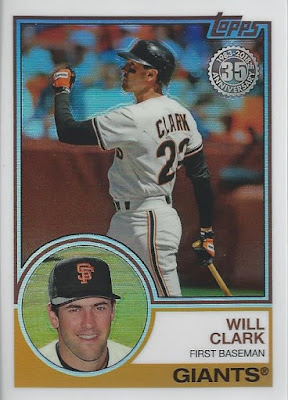 I used to collect Will Clark pretty hard-core as a kid in the early '90s.  Don't really chase his cardboard much if at all these days, but this shiny 1983-based card from last year was dirt cheap, and shiny.  Sold. 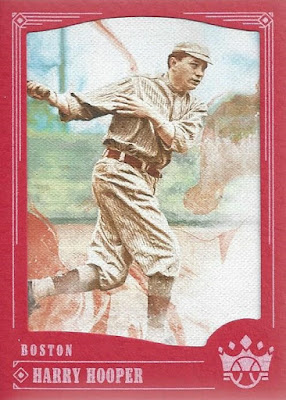 Here's a cool one.  I've always been somewhat of a sucker for "framed" cards like this one.  Aside from that, the bright red frame works perfectly here for a Red Sox card.  I chose this one because the old-time players look a lot better in logo-less, unlicensed format.  Possibly my favorite Harry Hooper card, which isn't saying much as I have all of four in total. 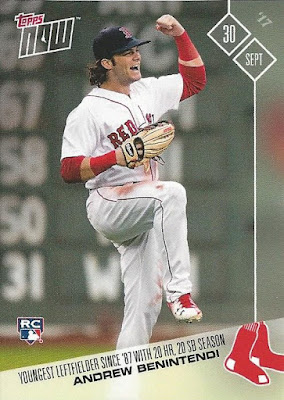 During the first year of the Topps NOW promotion, I went crazy picking up all the Red Sox cards.  I burned out on that quickly, and have grabbed less than a handful in all the time since.  I thought this Andrew Benintendi RC was at least an interesting pick-up at a price point well below $3. 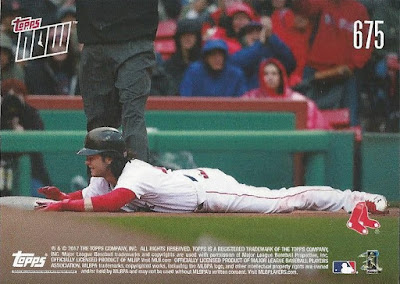 I think the photograph on the back might be better than the one on the front! 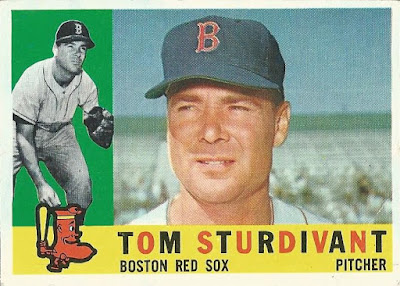 How about three more cards in my effort to flush out some vintage Red Sox team sets?  From the 1960 release I added pitchers Tom Sturdivant... 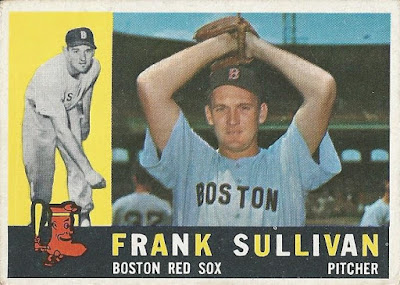 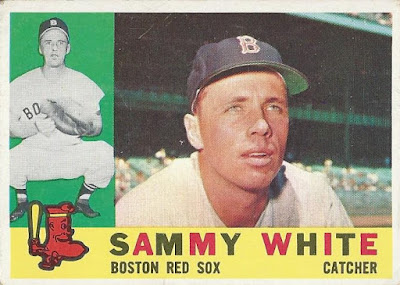 ...backstop Sammy White.  As with most of the vintage cards I pick up off of COMC, these aren't exactly gem mint copies primed for grading.  They present very nicely though, and I consider these to be "never need to upgrade" condition.  I'm up to a full two dozen Red Sox cards from the 1960 Topps set now, which seems like a lot until you realize that there are actually 35 Sox cards on the checklist!  Getting there slowly but surely, however I still need that pesky Yaz rookie... 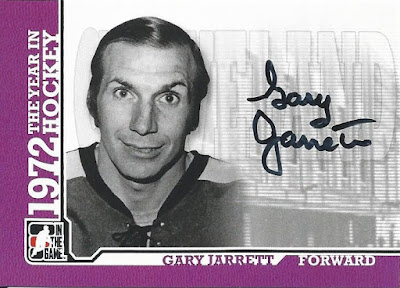 We'll close it out with an autographed hockey card, Gary Jarrett of the WHA's Cleveland Crusaders.  I thought this one was too cool to pass up, given that Gary is someone you don't hear much about, but who had some decent success in the WHA.  In the league's first season, which this set pays tribute to, Gary scored at better than point-per-game pace, with 79 points in 77 games.  Certainly one of the more obscure autographs in my hockey card collection.

Well, that's all I have the time (and energy) for today.  Hope you enjoyed this look at some of my COMC pick-ups from the past, and thanks as always for stopping by!
Posted by shoeboxlegends at 11:08 AM

Nice cards especially the Luke card. Will Clark and the Benitendo cards also stand out to me.

I don’t think Suarez will ever live down the infamy of the ear biting.

I'm with Bulldog... love the Luke and Clark cards. Don't know who Jarrett is... but that hockey autograph is cool too.