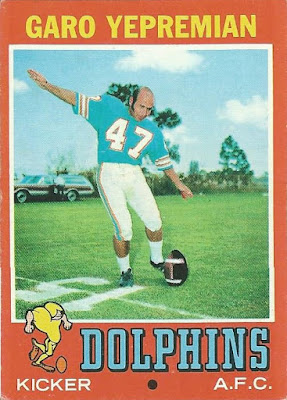 ...and a fantastic Dolphins card at that!  When I conceived the idea for this small project and began looking around at vintage football cards, it didn't take me very long to settle on Garo Yepremian's rookie card.

There are so many things for me to like about this card.  I'd never heard of Garo, who was born in Cyprus, before.  He doesn't seem like a likely NFL football player to me, between the diminutive stature (5' 7") and male pattern baldness.  Nonetheless, he was the team's kicker for their perfect season in 1972, which is pretty cool. 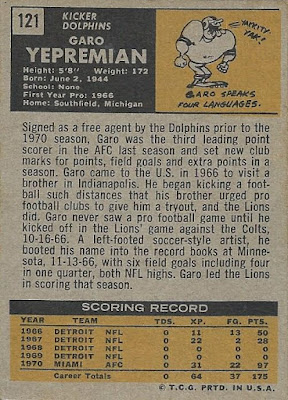 As the back of the card indicates, he'd never even seen an American football game before suiting up for his very first one with the Detroit Lions in 1966!

I really love the design for the back of the cards in this 1971 flagship set.  Topps fit a whole lot of information on here, including a small cartoon, and did it in such a way that it's very easy on the eyes and visually appealing.

The front isn't bad either, the cartoon element in the lower corner is perfectly '70s.  You don't see a lot of sets where red is the dominating color either.  2008 Topps Opening Day baseball comes to mind, but there aren't many.  All of the other pluses aside, you can't really go wrong with a card that features a couple of trees and wood-paneled station wagon!

This is proving to be a fun experiment a couple of weeks into the season so far; I'm pleased to welcome Garo to my collection!  Thanks as always for stopping by, and enjoy what's left of your Sunday evening!
Posted by shoeboxlegends at 5:55 PM

I was about to say I like this card and should get a copy and then I realized I already have a copy and wrote about it in the early days of my blog. Quick summary (because it's not worth linking to my blog for the very short post): Yepremian did a guest spot on The Odd Couple playing "Zeeno", who was - surprise, surprise - a European Soccer star turned placekicker. The only English Zeeno knew was "Keek!"

Now I like this idea. .... Of course it's a lot more fun when your team is assured of winning most games.

I definitely feel old that you hadn't heard of Garo Yepremian! He was one of the top kickers of my youth, but he's always remembered for his disastrous attempt to throw a pass in Super Bowl VII, ruining what might otherwise have been the first, and to this day only, Super Bowl shutout. Great card!

That card is fantastic. I love the old car in the background too.

Is that Clark Griswold's station wagon?

All rookie cards should look as cool as this. Love this idea for a series. I've been focusing on my baseball collection so much the past few years... maybe I should do something similar with my teams to help resurrect my football collection.

Brett Alan comment above is spot on. In fact, I was there at the LA Coliseum to see Garo's "pass" and the Dolphins Super Bowl VII victory. That's the only Super Bowl I've ever been to.

Brett Alan comment above is spot on. In fact, I was there at the LA Coliseum to see Garo's "pass" and the Dolphins Super Bowl VII victory. That's the only Super Bowl I've ever been to.

And, wearing a number other than his traditional #1.

The Family Truckster. Apparently before his hubcaps were stolen in St Louis!