No baseball on the horizon, but plenty of baseball cards still to get through in my long-term organization of my collection.  Taking a break from buying pretty much any new cardboard is giving me plenty of time to appreciate my backlog that's been built up over the years.

Let's take a look at 16 random cards that I recently processed and added to my digital catalog on The Trading Card Database... 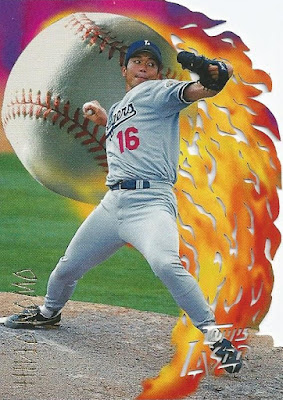 Is there a more insane die-cut set in existence than 1996 Topps Laser?  The '90s were a time of excess in baseball cards, and this release was a premium example of that.  This Hideo Nomo is actually a holdout from my childhood collection, recently salvaged and added to my present collection proper.  Just awesome. 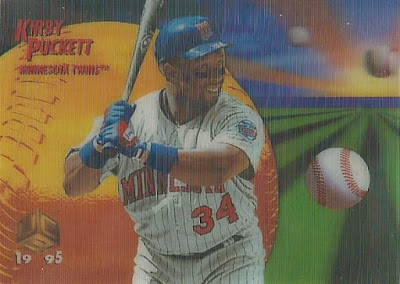 Another mid-'90s set that I adored as a pre-teen was 1995's UC3 release.  These lenticular cards were like the Kellogg's releases of the '70s and '80s on steroids.  They don't scan so well sometimes... 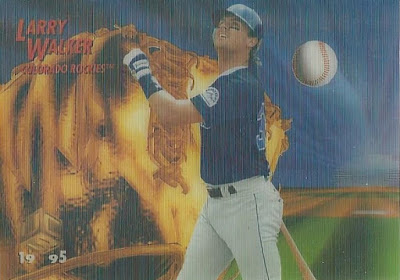 ...but in hand they're awesome, in a gaudy sort of way. 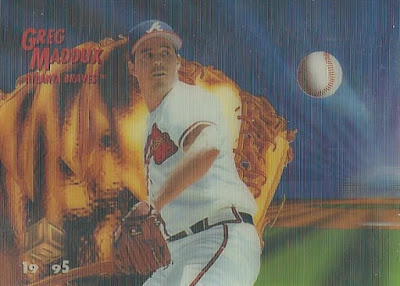 HOFers Puckett, Larry Walker, and Greg Maddux were plucked from a quarter box a long while back. 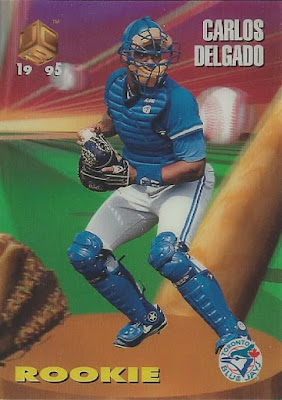 To make it an even dollar spent on UC3, I also snagged this Carlos Delgado RC from the set, which scanned much cleaner due to the vertical orientation I believe.  What a crazy card. 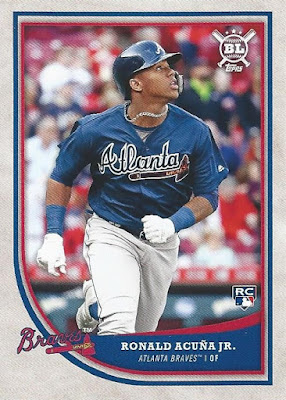 I picked up a lone pack of 2018 Topps Big League a couple of summers ago.  At the time I didn't really realize what a big deal Ronald Acuna Jr. RCs were, but when I stumbled upon this recently while purging out some cardboard I realized this is a $5+ card on COMC these days.  Gonna hang onto it for now given that it's my lone rookie of the Braves star so far. 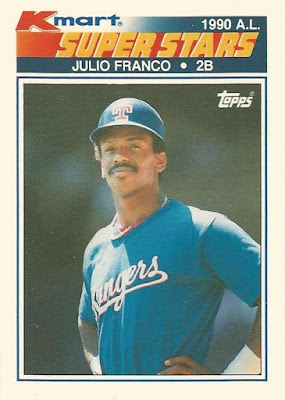 I think this one may have come from a re-pack.  Held onto it for the sole reason that I love Julio Franco cards.  I don't necessarily search them out that fervently, but I hang onto any new ones that I do come across. 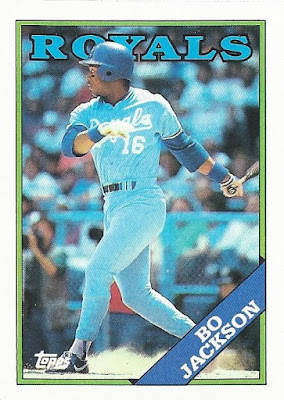 Next up, some keepers from a few '88 Topps rack packs I ripped open.  Always loved this classic Bo Jackson, the color scheme is fantastic. 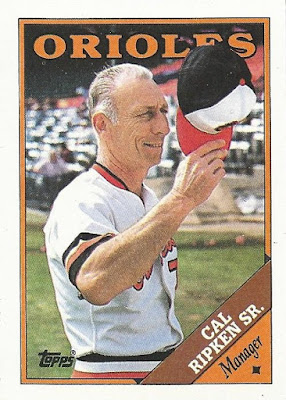 I picked up a box of rack packs from this set years back and only recently decided that I wanted it gone to make room.  Most of the cards I pulled got packaged in my next flat rate box for Billy at Cardboard History, but the few in this post I kept for my own collection. 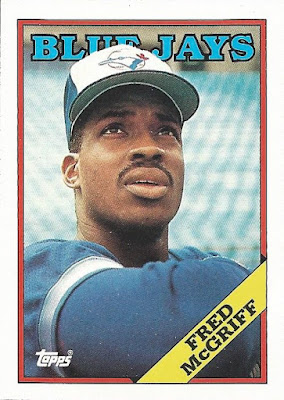 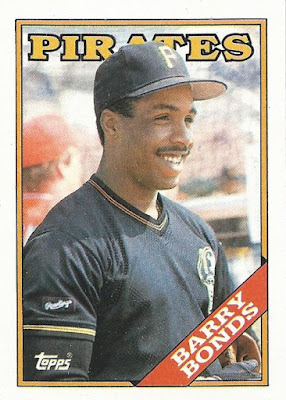 Barry Bonds doesn't bother me much these days, in fact I find I actually enjoy picking up some of his Pirates era cards in particular. 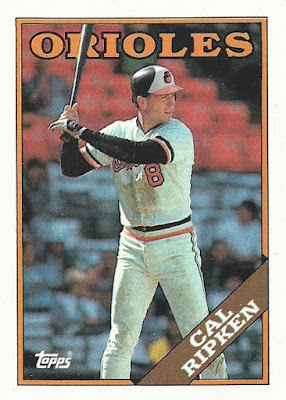 Another notch in my belt as far as my casual attempt to collect all of the flagship Ripken cards of the '80s from the various brands (Topps, Fleer, Donruss, Score, Upper Deck).  Not one of my favorite cards of Cal's from the decade, but a necessary step on that quest. 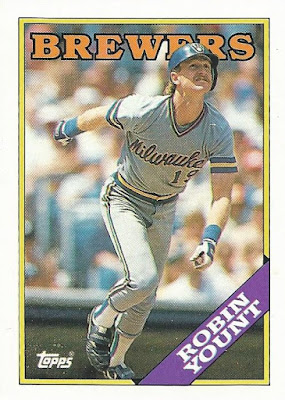 Robin Yount's card is another example of when the '88 flagship design shines, in my humble opinion. 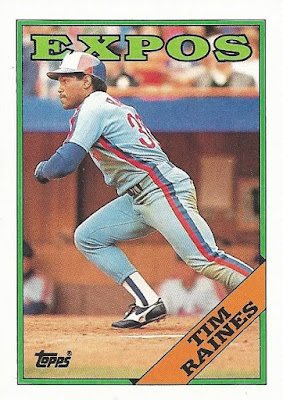 Yeah, I held onto quite a few HOFers from the last few packs I ripped.  When I picked up the box years ago I initially thought I'd hand collate a set.  These days I'd rather not keep hundreds of these around the house, and prefer a small sampling of stars, favorite players, and Red Sox cards instead. 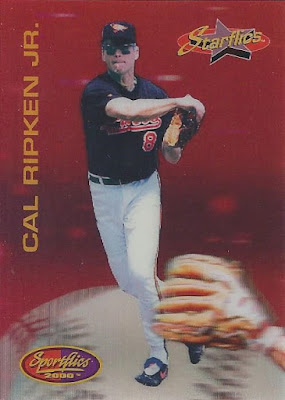 Final two cards came from the same quarter box as the UC3 cards above, they're from the Starflics subset found in the 1994 "Sportflics 2000" release.  I love these for the same reason I love the UC3 cards, that very dated 3D effect.  Couldn't pass up two childhood favorites in Cal Ripken Jr... 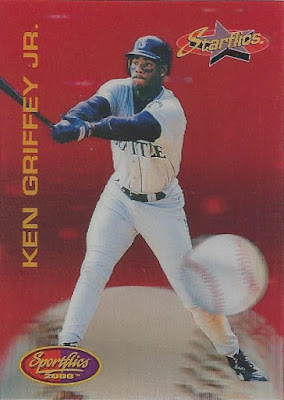 ...and Ken Griffey Jr., for twenty-five cents each.  Awesome, cheap additions to those player collections for sure.

I'm going to get back to organizing, scanning and cataloging on this rainy Sunday, so we'll call it there for now.  Hope you enjoyed this brief look back at decades past, and thanks as always for stopping by!
Posted by shoeboxlegends at 1:00 PM

Plenty of sweet cards. The Puckett is my favorite. The Acuna and Raines are cards I like as well.

I also get oddly excited over Julio Franco cards. Also I like Topps Laser but man are they hell on binder pages.

UC3 and laser sure were unique sets!

Carlos Delgado as a catcher is a good one. Considering he only played 2 games there in the majors.