An Awesome Soccer Re-Pack to Ease the Boredom

Even though I've largely (and successfully) sworn off ripping wax these past few years, there are times when I just can't resist the siren's song of the baseball card aisle at Target and will grab a cheap pack or two just to scratch that itch.  Even though my primary philosophy these days is to target exactly what I want and to bring a limited amount of cards into the house, the allure of not knowing what awaits you in a pack is still there from time to time.

I haven't walked into a Target in probably three months though thanks to this pandemic, so instead I decided to hit eBay to satisfy my "something with a surprise element" craving.  What I settled on was the package you see above, which is a random soccer re-pack.

For $11.99 this was an intriguing offer by a seller with excellent feedback.  Each lot contains over 20 cards and is guaranteed to have:
For significantly less than the cost of a blaster even with shipping and tax included, I decided to try my hand at one of these.  Figured it would scratch my itch, and get me a blog post (even though I'm aware that soccer cards aren't a big hit with most readers). 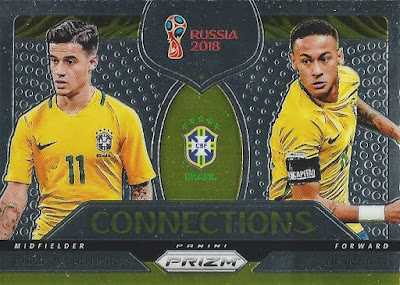 I have to say that I was presently surprised!  Right out of the gate, this Connections insert is one I needed towards my 2018 Panini Prizm World Cup master set build.  I opened literally hundreds of packs of this stuff in the summer and fall of 2018, but had yet to pull this particular card.  A perfect way to lead off. 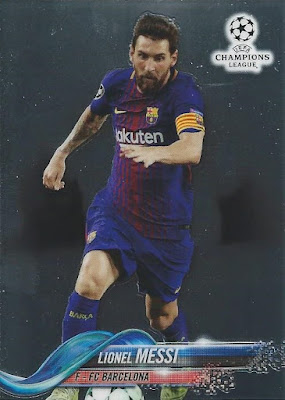 No complaints about this Leo Messi, even if it is the lone card in the re-pack that I already had a copy of.  Arguably the world's greatest player over the last 10-15 years, Messi has quite a following among collectors.  While there aren't any copies of this even available on COMC at present, this is likely a $5-$10 card on that site anyway.  I'll toss this into my "halfway decent trade bait" box for now.  If any of my regular trading partners would like it, just let me know in the comments... 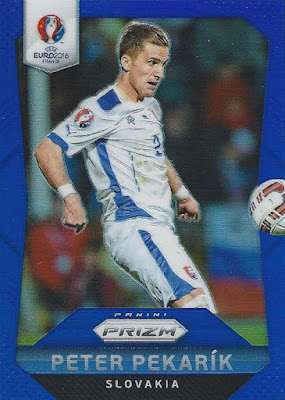 Here's a cool blue parallel, my first card from the 2016 Panini EUFA Euro Prizm set.  This one is serial-numbered on the back, I believe to /199.  Don't know anything about the card's subject, Peter Pekarik, but looks like he's been playing in the Bundesliga in Germany for many years.  That's actually one of the few professional sports leagues to hold games these past few weeks (albeit to empty stadiums). 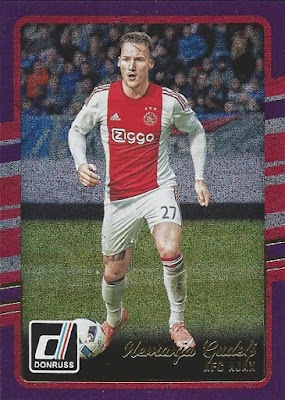 Here's a cool Purple parallel from Donruss.  The scan is a little deceptive, but this one sure is shiny and cool in hand.  These last two cards were exactly the type I was hoping for and expecting with this lot; teams, leagues, players and even sets that I was wholly unaware of. 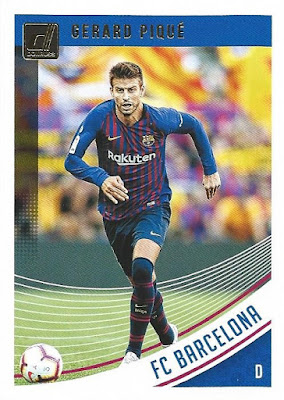 There were a handful of cards from the 2018 Donruss release in the package.  Baseball fans will surely recognize elements of this design from Panini's Donruss baseball product a couple of years ago. 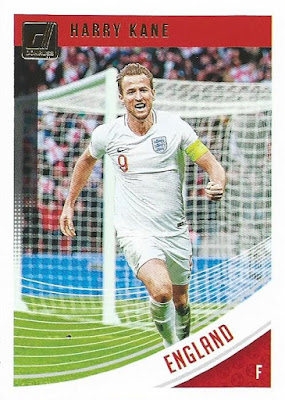 I like this Harry Kane in particular.  Aside from being one of the top offensive threats in the Premier League for years running now, this is just a great shot of a jubilant Kane taken presumably just moments after he found the back of the net for his country in international play. I'll confess that I'm not all that familiar with Gabi, but I appreciate this insert from 2015 Donruss since I did not pull one of them when I busted a wax box of this product a few years ago. 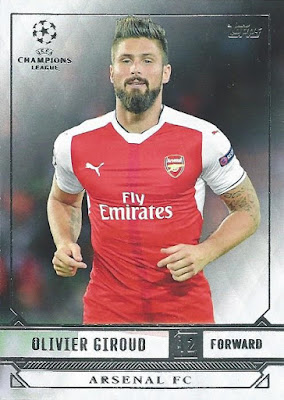 Next up we have a couple of players that I absolutely do recognize and have watched play many times.  From Topps UEFA Champions League Gold we have Olivier Giroud of Arsenal... 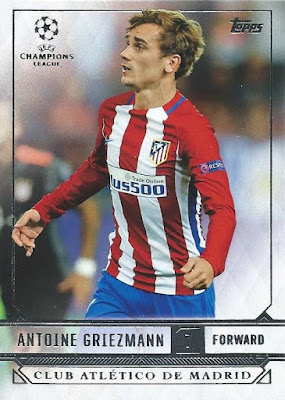 ...and Antoine Griezmann of Club Atletico.  I've shown cards of Antoine on this blog quite a few times, as I really enjoyed watching him and his French teammates capture the World Cup in 2018.  Really happy with the pair of stars that I pulled from this particular set. 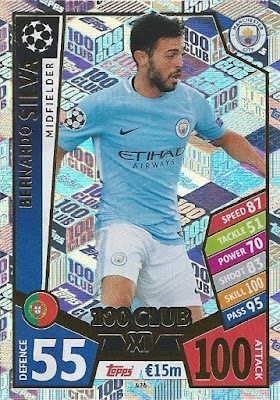 I'm not really big on Topps "Match Attax" soccer cards.  These are game cards similar to the Attax baseball line from a few years back.  This particular card though is a 100 Club parallel, and is so damn shiny it's almost jarring!  So, I'll keep this one in my soccer box for now. 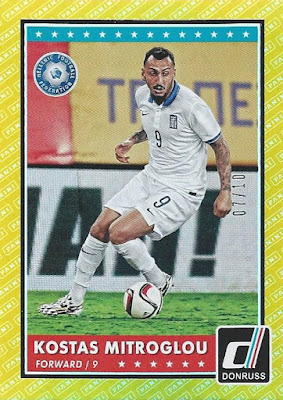 As far as parallels go, this was the star of this re-pack.  This one is also from the 2015 Donruss set, and I did not pull anything near this cool or scarce from my box.  This Gold Panini Logo parallel has a foil effect on the borders, and is numbered to just /10.  True, it's not exactly Cristiano Ronaldo or anything but I feel like a card serial-numbered that low is cool in its own rite.  Besides... 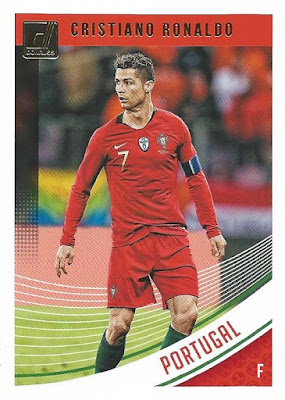 ...I got my promised Ronaldo anyway!  As with Leo Messi and Kylian Mbappe, this guy is such a titan in his sport that any new card of his feels significant.  Much like Jordan or Wayne Gretzky.  I've got about a thousand soccer cards and counting in my official collection now, but this is just my eighth card of the superstar from Portugal. 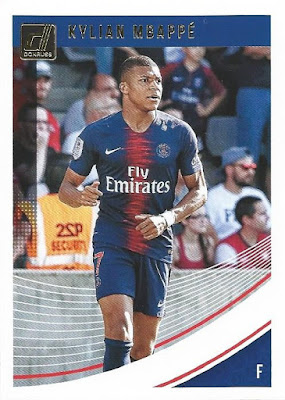 Completing the trifecta of the hottest soccer players on the planet as far as sports card collecting goes, here's my newest Kylian Mbappe card!  At this point I'm pretty astounded at what a great deal this repack was.  Even though this is just a base card, good luck finding a copy for less than $5.  This one card probably covers half of what I paid for this re-pack, not that I plan on selling it. 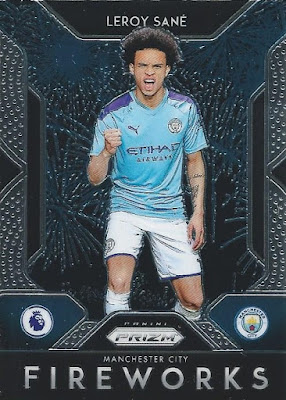 I've eyed these "Fireworks" inserts on COMC a few times, they're pretty much dollar box fare.  Really cool idea for a card.  It looks a lot more vibrant in person than it came across in the scan, as is typically the case with Prizm cards.  There are "Prizm" versions of these that are even shinier, I'd love to pick one of those up of a player I enjoy at some point. 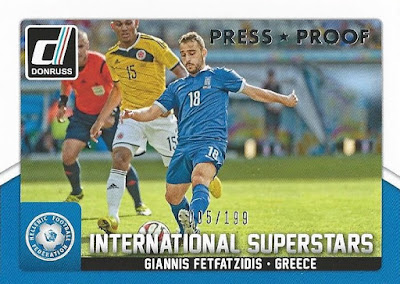 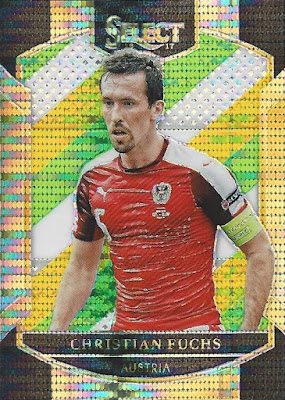 This extremely bright and shiny card is a "Multi-color Prizm" from 2016 Panini Select.  As crazy and vibrant a card as this is, it turns out this is only the second best card of Austria's Christian Fuchs (he he) in this particular re-pack! 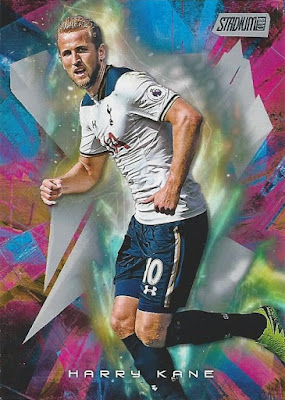 I'm showing these in the order that they came out of the team set bag, and I have to say that at this stage I was already more than satisfied that I'd gotten my value out of this $11.99 spent.  This Harry Kane is from the Golazo insert in Topps' Stadium Club Premier League release from 2016.  I busted a box of this as well, and commented at the time that these colorful beauties were among my favorite cards in the product.  I was not fortunate enough to pull Harry Kane in that box, but now I've got one years later.  Awesome stuff.  One of my top three favorite cards from this re-pack I'd say. 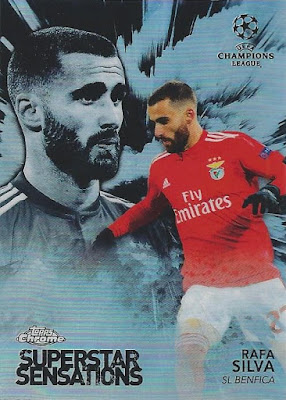 This Rafa Silva Superstar Sensations insert is my first card of any sort from the 2018 Topps UEFA Champions League Chrome set. 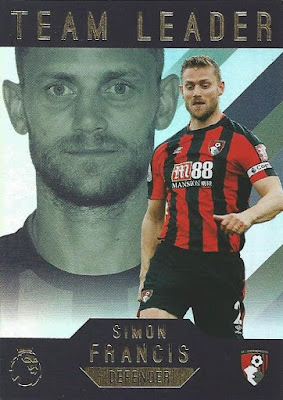 Ditto for this Simon Francis, which I had to do some research on but discovered is a subset card from the 2017 Topps Premier League Gold set. 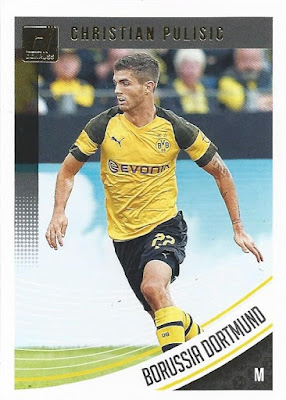 Here's another nice star card, featuring American phenom Christian Pulisic.  Being one of the best prospects in soccer years back I was already familiar with Christian by name, but I've gotten to see him play a few times now since he transitioned to the Premier League with Chelsea.  He's still just 21 years old with a long, bright future ahead. 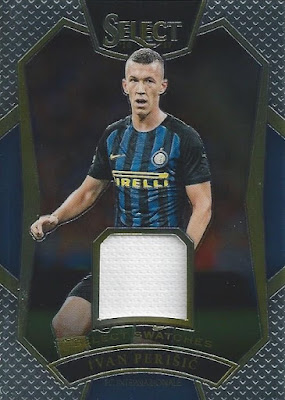 Each repack promised a relic card, and this one contained a piece of Ivan Perisic's kit.  I really like the look of these as far as relic cards go, and have even considered spending over $50 on a Ronaldo (shinier than this card, some type of Prizm) but haven't pulled the trigger.  I'm actually familiar with Ivan due to his involvement in the 2018 World Cup, and inclusion in the corresponding Prizm set.  I'm not a big relic guy in general, but I was satisfied with this one. 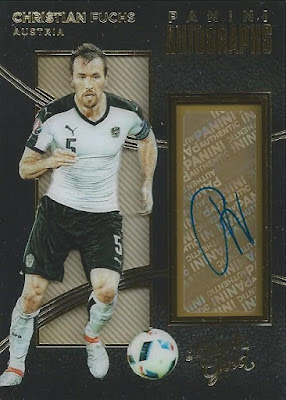 Last but certainly not least, my autograph was this really cool Christian Fuchs card from Panini Black Gold.  I think this was a higher end release, it's certainly the first card I've ever seen from the set in person.  It's hard to tell in the scan, but quite a bit went into constructing this card.  Holding it on its side you can see that there are actually three layers that give the card a kind of "shadow box" effect.

The back layer has that brown striped backing that you see behind Christian, then there's a middle "spacer" layer that elevates the top portion of the card which contains the border and the image of Christian.  The box behind Christian is a clear acetate on that top layer, allowing you to see down to the bottom layer and creating a cool 3-D sort of effect.  I did not expect anything this nice as my hit in a re-pack for $11.99, that's for sure!

Well, that was a whole lot of fun.  I killed an hour or two stuck at home just enjoying these cards, researching the subjects and typing up this post.  I'd certainly consider going back to this seller for another re-pack or two if this pandemic lasts as long as it's supposed to!

Thanks for stopping by as always, and especially for sticking with me through a soccer post, and have a great Memorial Day weekend!  I've got more content planned for the holiday weekend so stop on by again if you're looking for some cardboard happenings to read about...
Posted by shoeboxlegends at 3:45 PM

Cool mystery pack. I've never bought these off of eBay, but I used to buy ones sold by YouTubers. Anyways... I did a double take after looking at the Christian Fuchs card. It's a good thing you wrote out his name, because that's not what what my eyes originally saw.

That's a really cool repack. I've been thinking about getting into soccer cards. What was the name of the ebay seller?

I've heard of Messi and Ronaldo.

I think I have this product in my eBay watch list right now! I've considered picking one up, now that I've seen some contents, I may just have to roll the dice. Thanks for sharing. Possibly interested in that Messi if no one else takes that trade bait.

The seller's name is 'teambunnell06'. I believe he raised the price by $1 to $12.99 a few days after I picked this up. Still a good value though!

Tim, I'd be happy to send you the Messi, just drop me an email with your shipping info!