The Itch to Rip - Couple Packs of '18 Stadium Club 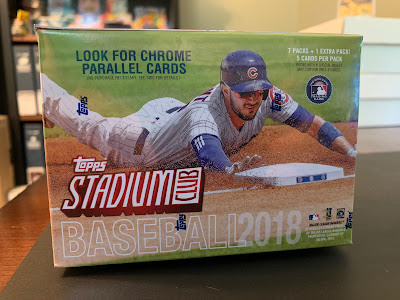 Sometimes you just get the itch to rip.  But, what do you do when you haven't been to a big box store in months, and when on top of that there are only one or two modern products that even interest you year to year? 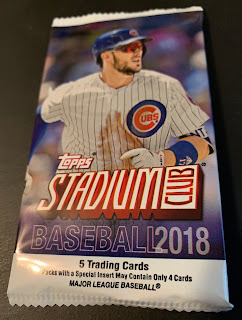 Well, I decided to pick up a blaster of the only product that I seem to enjoy year in and year out on the baseball front.  Topps Stadium Club.  For $24.99 with free shipping, the above blaster of the 2018 release was delivered to my doorstep during the pandemic here.

I enjoy every Stadium Club release since the brand returned for the 2014 collecting season.  Why did I choose 2018, then?  Well, the price was right, but more importantly in looking over my collection on TCDB.com, this is the set that was least represented as far as Stadium Club's modern run goes.  In fact, the only cards I have from this release are Red Sox, so it is a virtual lock that any base cards I pull out of this thing will be needs for me.  For once I'm hoping for a blaster bereft of Boston cards!

Just five cards per pack in the retail version of this product, with eight packs in the blaster.  You're paying ballpark $.50 per card.  Not the most economical way to work on the set but...the urge to rip!

I've cracked open the first two packs of my blaster to share on the blog here today.  Here we go... 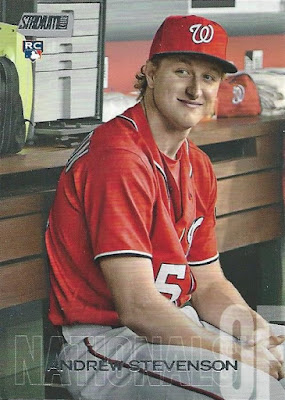 Coming out of the gate we have a player I am not ashamed to admit I do not recognize by name at all.  Looks like Andrew had a total of 30 at-bats for Washington last year, so I guess I can forgive myself.  Does he get a 2019 World Series ring based on that contribution to the club? 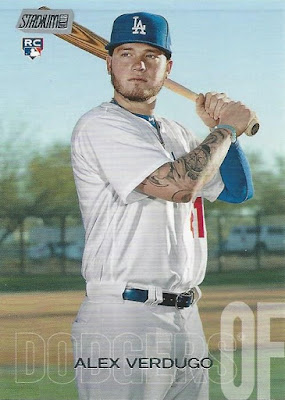 Here's a name I do recognize, as Alex came to Boston as part of the Mookie Betts trade.  I'm sure Dodgers fans must be breathing a small sigh of relief after last week's announcement on the 2020 season; for a while there it looked like Mookie Betts might never see action in Dodger blue!

Bonus points for the visible parking lot in the background of this card. 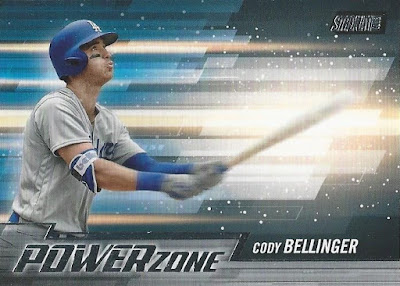 Pulled an insert in this first pack, a Cody Bellinger Power Zone.  Snooze.  I'll throw this one on the stack for the upcoming card giveaway I'm planning for my hobby friends/followers/trade partners, I guess. 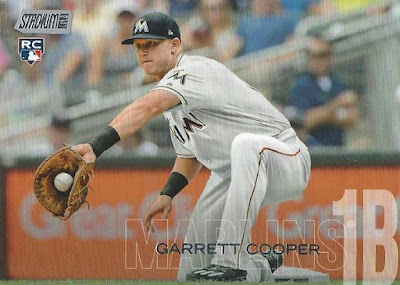 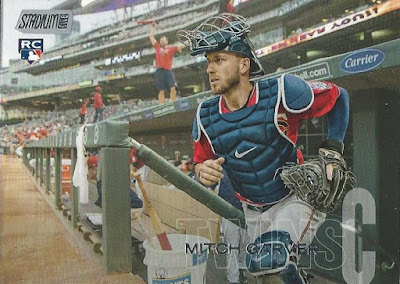 Last card in the first pack is catcher Mitch Garver of the Twins.  Easily the winner of the best photograph in the pack award.  Mitch exploded last year to the tune of 31 home runs for Minnesota.

Amazingly, or maybe not so amazingly given that this is produced by Topps after all, every single card in my first pack other than the insert was a RC.  I don't really view that as a positive honestly, would prefer to see some veterans, and even better some retired legends, mixed in. 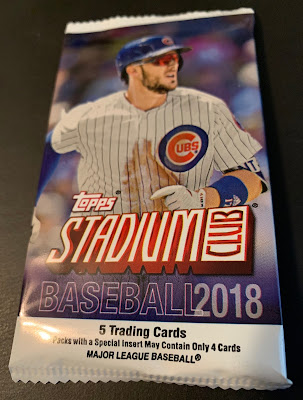 Let's crack the second pack before we call it a day... 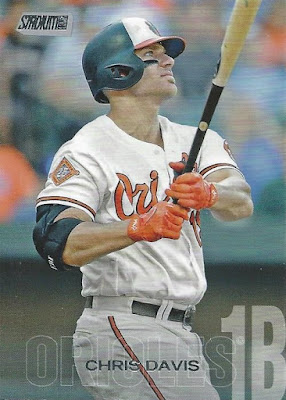 Alright, we've got a veteran here at least.  Chris has put up some monster numbers at times, but has also famously struggled mightily in the batter's box. 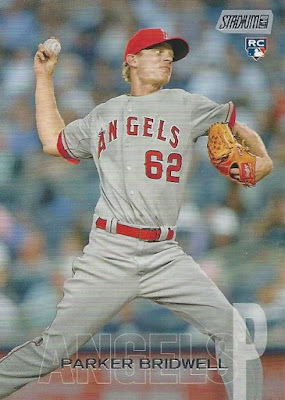 We're immediately back on the rookie train though, with Angels hurler Parker Bridwell.  After posting an ERA on the wrong side of 17.00 last year (yes, you read that correctly), he's now apparently property of the Twins. 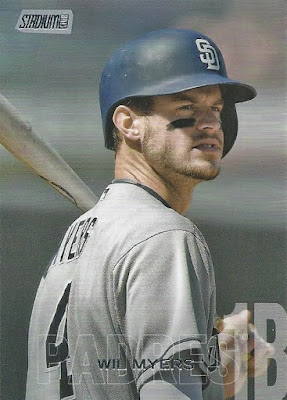 Another veteran, with Wil Myers of the Padres.  About as bland a photograph as you could expect from this brand. 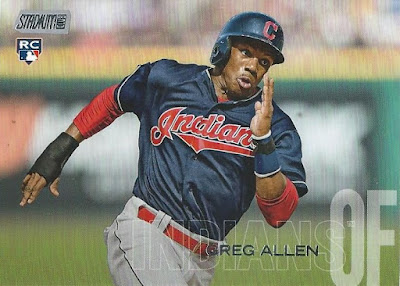 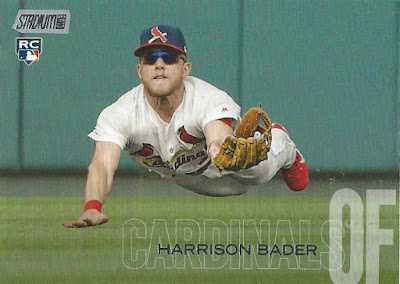 All base cards in my second pack, which I actually prefer, but man the number of rookies is just problematic to me.  At least Harrison Bader makes a bit more sense, as he's averaged over 130 games played over the last two years for the Cards.  Plus, that's a pretty great photograph of Bader completely suspended in mid-air while diving for a catch.

Still though, out of nine base cards in these first two packs, seven of them featured unproven rookies who had barely sniffed an MLB roster prior to this set being released.  Yikes.  I didn't look over the checklist as I don't want to spoil what's potentially left in my remaining six packs, but let's hope this is a weird coincidence.  I'd love to find more veterans and stars (and a bit more of the stunning photography that Stadium Club is known for as well) in the remaining portion of this blaster.

That's a wrap for today.  I'll be back with another couple packs of this soon, in the meantime thanks as always for stopping by!
Posted by shoeboxlegends at 6:00 PM

Parker Bridwell came up in the Orioles system, and there was a time when he pitched well enough that I was grousing about the O's letting a decent pitcher get away. I don't say that now. :-D

It seems like the cool photos are on the ho cards with the vert cards getting the boring photos. I look forward to the other packs so I can see if this trend continues.

Nice find. 2018 featured a solid rookie card class. Hope you pulled a few nice ones for your collection.

I love the Garver card, those people dancing on the dugout put it over the top!