In today's Signature Sundays post, let's take a look at the other three 1989-90 O-Pee-Chee autograph cards that came in my recent lot of six, purchased from a reputable seller on eBay.  If you missed the first trio and want to check them out, you can find those here.

Anyway, this is the first set of sports cards that I ever collected as a young lad, so I've been casually accumulating autographed cards from the set.  Let's dive right into today's trio... 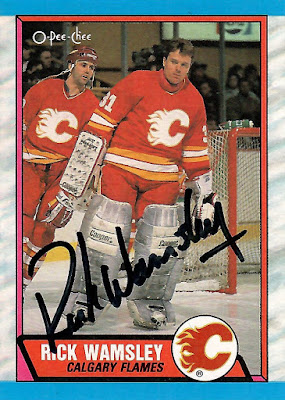 From the Calgary Flames, it's goaltender Rick Wamsley.  What I associate Rick with most is being part of the trade (headed to Calgary) that brought sniper Brett Hull to the Blues.  That's probably not fair to Rick, who had a lengthy NHL career supporting a few different franchises, but it is what it is.

Wamsley sure has a great signature, I'll give him that. 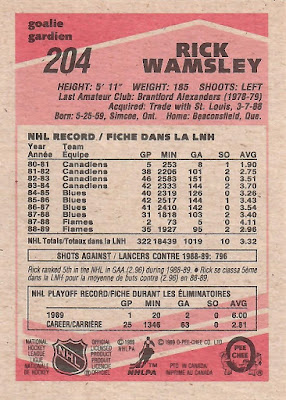 Here's the back, with evidence of that '87-88 trade that sent Wamsley north of the border, and Hull south of it... 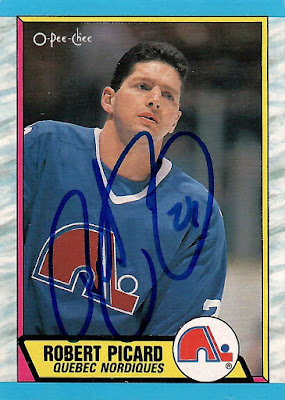 Next up, Robert Picard of the Nordiques.  While I'm grateful to land any Nordiques player for this project, Picard is not one that I've got a lot of memories of from childhood.  In fairness to me, he was wrapping up his NHL career just as I became a fan. 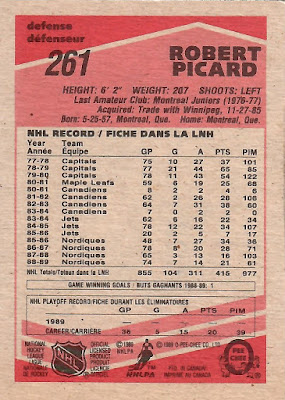 Robert bounced around quite a bit, though in most cases he did last multiple seasons wherever he landed.

The final card is the one that drew me to this seller to begin with, and my absolute favorite of this order... 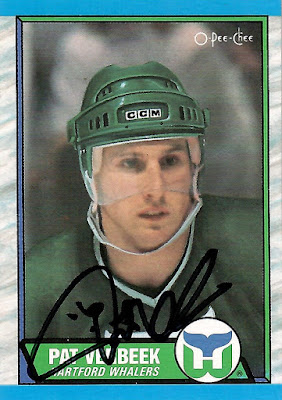 Oh yeah!  What a great autograph of the "Little Ball of Hate", Pat Verbeek.  Pat was one of my younger brother's favorite players growing up, and he was the kind of guy who you absolutely despised if he wasn't on your team, but absolutely adored if he was.  Very much Brad Marchand before Brad Marchand.

I always liked Verbeek's distinct signature, with jersey number included in the opening 'P' of his first name.  This has always been a very recognizable card as well, due to the atrocious airbrushing used to convert Pat from his Devils gear into Whaler garb.  So happy to have an autographed copy of this childhood favorite! 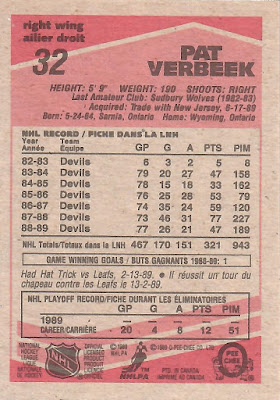 I wish Verbeek would get the call to the HOF someday.  His 522 career goals are just about the most of anyone not enshrined, and he's right on that line with guys like Pierre Turgeon and Jeremy Roenick.  Maybe someday!

That's a wrap for this week's autograph post.  I'm actually up to 23 different on-card autographs from this set now, if you count my Topps and O-Pee-Chee cards combined.  If you're interested, you can see the entire collection here; it's starting to look quite nice if I do say so myself.

Posted by shoeboxlegends at 2:00 PM

Wow. Verbeek's 500 goals is very impressive. I wonder if the 500 goal mark is one of those things where if you score it, you'll eventually get the call. Hope so, because my boy Marleau has over 500 goals.

Agree with Fuji. Verbeek's 500+ goals (and 1,000+ points) is really impressive -- even more so with all the time he spent in the penalty box!