Today's post is all about 1953 Topps.  I know, the blog has been heavy on this set as of late.  What can I say?  In a weird way, selling off the bulk of my graded '53s has motivated me more than ever to go after the set (as well as provided some serious funds with which to do so).  When I sold that lot of graded cards off, I kept not only my Red Sox cards from the release, but also the three HOFers from the set featured in today's post.

All three are no-brainers for my Keepers project on the baseball side.  They've each been featured on the blog in the distant past, but not for many long years, so I'm excited to show them off again... 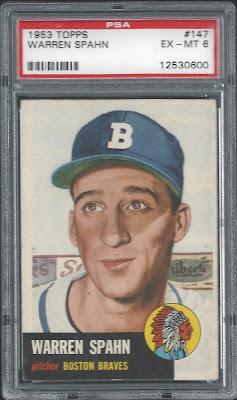 Leading the charge is one of the game's all-time great southpaws, Mr. Warren Spahn.  My favorite card of Spahn of the handful in my collection, both because I love this set and because Warren was flat out dominating in 1953.  The Cy Young Award wasn't introduced until the 1956 season, but had it existed back then Warren would have been a strong contender in '53 with his 23 wins and 2.10 ERA, both best in the league. 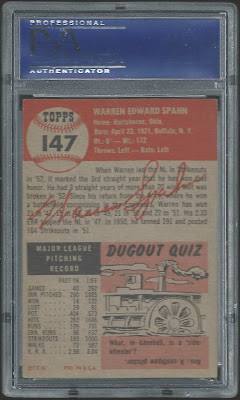 There are actually two versions of the Spahn card in the set if you're that particular (I'm not).  This one has the biographical information up top printed in white ink, the other version uses black ink.  I am not pursuing a "master set", so one version of Warren's card is plenty for me. 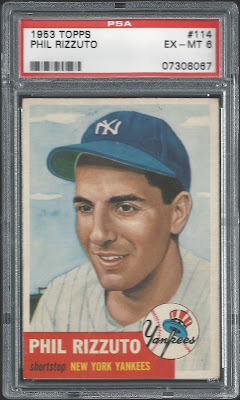 Next, Yankees superstar Phil Rizzuto!  If memory serves, this was one of the very first HOFers from the set that I ever landed, well over ten years ago now.  [Goes and searches email - yep, January 2008!]  1953 was Rizzuto's last really good season, and the last in which he'd receive any MVP votes. 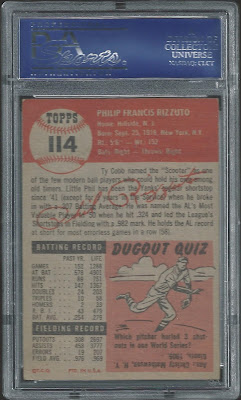 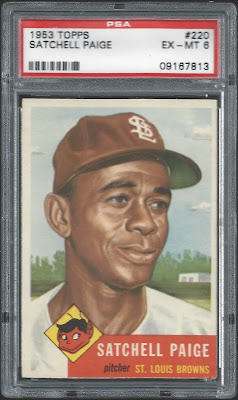 Lastly, my favorite card in today's trio, Satchel (misspelled Satchell here) Paige!  This is an absolute cornerstone card of my entire baseball collection.  There are precious few playing-era Paige cards out there, since he enjoyed the majority of his success during his many years in the Negro leagues.  This one's been a personal favorite since the day it arrived, and still brings a smile to my face many years later.

This has really become an iconic baseball card, and it's easy to see why.  I'd be hanging onto it even if I had to shave my collection down to just 10 baseball cards, forget 1,000.  Can't say that for the other two cards in this post, as cool as they are. 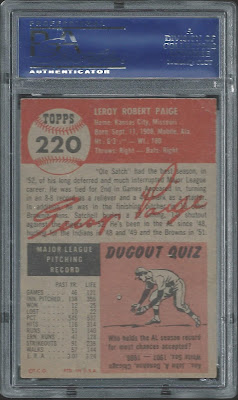 Three great cards there, all easy selections for this exercise.  With these added to my tally I'm back up to 35 cards in my second pass at the 1953 Topps set as well, getting there slowly but surely!

That's 14 cards down in the Baseball Keepers collection altogether now, 986 to go.  You can see the virtual album here if you're interested.

I'll be back with more keepers soon, in the meantime thanks for stopping by!
Posted by shoeboxlegends at 2:00 PM

I'd keep all three of them too! Also jealous.....I don't have either version of the Spahn.

Ever since I found out Spahn was a Western NY native like myself, I've had a deeper appreciation for his career and cards. You've got some great cards there!

Such great cards for your 1,000 keepers.

Glad you decided to keep those three! That Paige in particular is incredible -- it's long been a dream of mine to own one of his playing-day cards.

Oh dang. All three are awesome... but I'm especially jealous of the Paige. I'd love to add even a PSA 1 graded copy of that card to my collection. A PSA 6? Maybe if I won the lottery.

This is a fantastic trio of keepers! Until I read Fuji's comment I had assumed the Paige was valued at maybe half of what eBay sellers are asking for a PSA 6.