Buyback Franken-set: An Amazing Buyback or a Defacement of Vintage?

About this time last summer, a buyback surfaced on eBay that had me absolutely drooling.  The player featured is probably one of the most prominently collected baseball players out there, and I knew demand would be high.  Accordingly, I stepped up my game with a bid that was higher than I'd normally spend on a single card, and certainly on a buyback.  Even so, with the rarity of this particular card I didn't think I had a snowball's chance in hell of taking it home.

Well, to my amazement, when the dust settled I won the card for just a shade over $60, about half of what a hobby box of Allen & Ginter would set you back these days.  It's the most money I've spent on a card for this franken-set project by a long shot, but do I regret it?  Not in the least.  Check this one out! 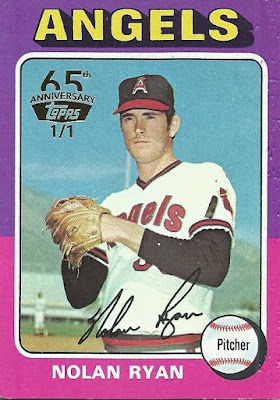 It's been about 12 months now and I still smile when I look at this one.  I'm sure there will be some out there who read this post and cringe at the fact that Topps defaced a '75 Nolan Ryan with a foil stamp, and I can understand that sentiment.  For an admitted buyback junkie like myself though, this card (my first 1/1 buyback!) brings some serious legitimacy to my franken-set!

For me, the card held extra appeal because Nolan Ryan was one of three players that I considered favorites and collected as a kid.  I was pretty much obsessed with the Texas Express, and collected every bit of Ryan memorabilia I could get my kid hands on.  Cards, posters, Starting Lineups, and anything else I could find featuring baseball's strikeout king were strewn about my room as a kid.  To this day I still have the signed ball I received from my dad as a birthday gift prominently displayed below my dart board.

I didn't retain everything over the years, but I still have the ball as I mentioned, and when I got back into collecting I picked up the majority of Ryan's standard Topps flagship run (still don't have a RC).  This will be a nice, unique addition to that small collection. 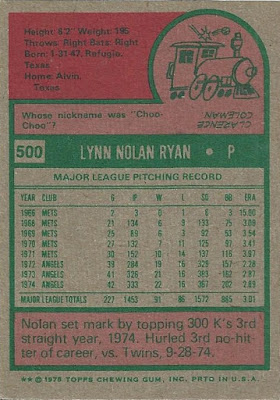 As I said, I really didn't expect to win this one.  There's a huge base of Nolan Ryan collectors out there, so I figured just about any 1/1 (no matter how "gimmicky" it might be viewed as by some) would go far up into the triple digits, beyond what I was willing to pay.  $60 might seem like a lot to shell out to this card, but the way I see it this will be a significant card for me for the rest of my lifetime, which I doubt I could say about anything I would pull from $60 worth of blasters from Target.  To each his own. 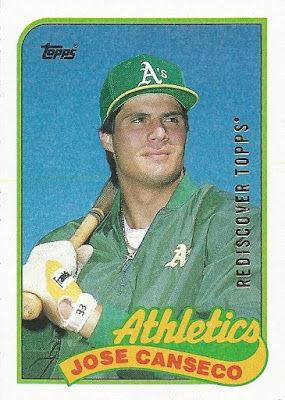 Jose Canseco was previously occupying slot 500 (hero number!) in the franken-set with his '89 Topps release.  Not a bad card in the least, and normally it would provide some solid competition as far as the binder goes. 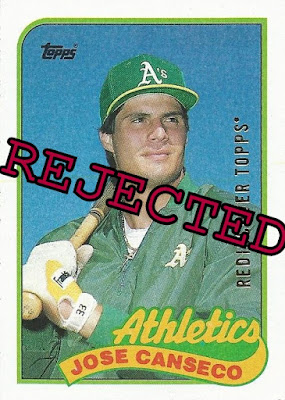 In this case though, it's no way Jose!

So there you have it, my single best buyback yet.  Probably always will be.  Now I really feel like this project has some weight behind it.  I'm not sure there's a buyback on this planet that could supplant this one, as far as this project goes I expect this one to remain in the binder permanently.

The way I see it there are thousands and thousands of copies of this card out there, so I don't think stamping one was the end of the world.  To me, it makes this one copy unique compared to the many others in circulation.  I'm sure others will disagree though.  Would love to hear your thoughts in the comments, an amazing buyback or a defacement of vintage?

I'm going to be that guy who says it's an amazing buyback AND a defacement of a vintage card. I didn't know Topps did buybacks which weren't commons, so it's cool in that respect. I guess I view it similarly to when someone gets a vintage card autographed. It ruins the condition, but it's cool in its own right.

Not a fan of stamping cards in the first place (if you want to distinguish it as a buyback, stamp it on the back). However, that sure would look nice in my '75 buyback set. It's good to know there's at least one buyback '75 Ryan out there. Maybe there's another for me.

If this were a really rare card like a 1948 Leaf Jackie Robinson, then I might question stamping such a card. But let's be real... there are plenty of 1975 Topps Nolan Ryans to go around. Congratulations on adding this to your set. Shame that sweet Canseco got knocked out.

I agree with most of what has been said so far. Cool buyback but a defacement of vintage. It also in a fundamental way defeats the 1/1 concept and helps legitimize the Ebay 1/1 concept. OK lets look at this realistically. Back in 1975, well late '74 really, Topps produced this Ryan card. Like the rest of the batch it was packaged up into a pack, or a vending box or maybe even a boxed set (they did do factory and boxed sets then didn't they?). Somewhere along the line someone pulled the card from the pack or the vending box. After who knows how many years it eventually made its way back to Topps. Unless these "buy" backs are actually unsold cards that were put in storage. Anyway my point after this long-winded nonsense it that particular card is NOT a single unique card. It is one of several thousands that were made some 42 years ago. Not a uniquely single card that is unlike any other card. OK so I'm guessing it is stamped 1/1 because of all the buybacks they released this year it is the only '75 Nolan Ryan. Sure I'll buy that for a dollar, that's the ticket. Sorry for being a negative Nolan.

No two ways about it: this is a tremendous pickup. If it makes you happy, then that's the only important thing. That's what this hobby is all about!

Congratulations! I watched the bidding on that card so it's cool to see that a you ended up with it.

It was tempting but out of price range. I'm trying to pickup a sample of each type of 1975 buyback, so the 1/1 would be very nice but it didn't have to be Nolan.