There's a myth among certain collectors that collecting graded cards has to be expensive.  It sure can be, but it doesn't have to be!  In the 'Cheap Slabs' series here on the blog, we'll look exclusively at graded cards that cost me $25 or less to add to my collection...

Today's card is a rookie card of one of the most dominant pitchers of his generation, Justin Verlander! 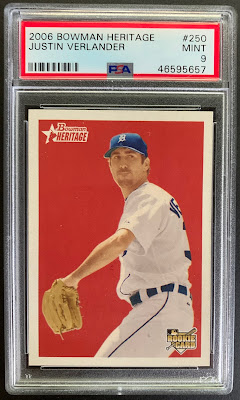 Pretty nice, huh?  I won this card on eBay a couple of months ago, while sheltering in place.

Verlander could hang up the spikes today for good, and would still retire as an 8x All-Star, World Series champion, AL MVP, 2x Cy Young winner, AL Triple Crown winner for pitching, Rookie of the Year, 3 no-hitters, 3,000+ strikeouts, and more.  Justin's an absolute lock for Cooperstown, and it's crazy to me that his rookie cards are still as cheap as they are at this point.  Just how cheap?

This card was had for $12.50.  I know pitchers don't get a lot of love, and everyone just wants to collect Ronald Acuna and Juan Soto, but come on! 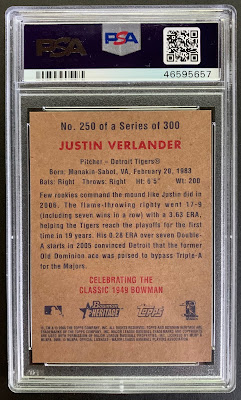 These 2006 Bowman Heritage cards were inspired by the '49 Bowman set.  Of course, the '49 Bowmans were miniature in size, but good enough.  There actually are mini versions of these that are similar in size to the original '49s, but I'm betting a Verlander mini might set me back more than this full-sized version did.  I'll certainly be keeping an eye out though!

That's about all for tonight, just a really cool card of an under-rated (at least in terms of his perceived value in our hobby) star hurler.  Further proof that if you look hard enough, you can find some pretty great cheap slabs out there!

Posted by shoeboxlegends at 7:00 PM

Nice deal! I've looked at the prices of his Topps and Bowman Chrome RCs but never found room in my budget. I was lucky enough to find a JV Studio RC in a flat-rate box of random cards purchased on eBay some years back. It's not Bowman but it will have to do.

Was looking for content for my This Week in Blogging post and I'll definitely use this post for inspiration. Great deal on that Verlander. Gotta imagine it'd be tough to find one of these for this price right now. Graded rookie cards of future hall of famers seem to be really hot right now.

That is surprisingly cheap... I guess it helps that the card is something of an oddball. Nice pickup!

I'm not a graded card collector, but definitely look forward to more of this series. Good bargain you got there. Nice-looking card, too.

Nice card and some players do not get the love