There's a myth among certain collectors that collecting graded cards has to be expensive.  It sure can be, but it doesn't have to be!  In the 'Cheap Slabs' series here on the blog, we'll look exclusively at graded cards that cost me $25 or less to add to my collection...

Today's card is a very cheap rookie card of one of the best offensive players to debut for my hometown Red Sox in the past few years... 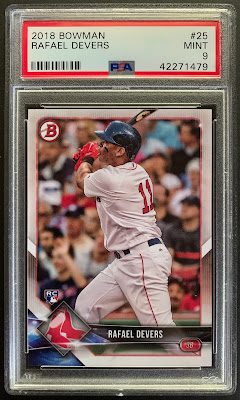 It's the standard Bowman rookie card of third baseman Rafael Devers, in a nice PSA 9.  I've already got a raw copy of this card, maybe even a couple, but I couldn't resist snatching this one up given that it cost me just $6.25 of COMC store credit!

Devers has had some issues in the field at times, but has been a great hitter in the Boston lineup early in his career.  He led the league in both doubles and total bases last year, his age 22 season.  While his numbers dipped a bit in 2020, I'm considering this past "season" an anomaly as far as my collecting goes, and am just as excited to pick up new Devers cards now as I ever was. 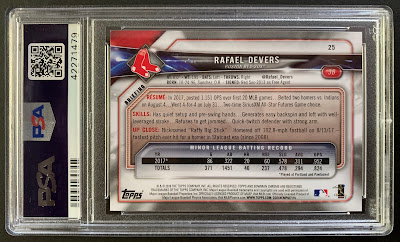 Here's a look at the back, way too busy if you ask me.  In fact, I'm not generally a huge fan of Bowman sets for this very reason, but in this case it was a cheap enough rookie of a player I like a good deal.

So, there's my latest cheap slab.  I actually picked this up many months ago, as evidenced by the fact that I actually have it in hand despite not receiving either of the two COMC orders I've had shipped to me this year yet.

I've got plenty more cheap PSA-graded cards to share in future iterations of this series, but until then thanks as always for stopping by!

Not the Devers I expected.

That's a nice low-priced Devers! I'm now waiting on two COMC orders myself, which include a few slabbed singles that were not quite this cheap.

Nice purchase. Doubt you could have a card slabbed for $6.25 these days. As for the card itself... I wonder why Bowman rookie cards (not to be confused with 1st Bowman) don't receive more hobby love. Seems like they're hidden treasures while everyone else chases the Topps rookie cards.

Good pick up. For that price it is well worth it. Devers has plenty of upside and still young. Good post.