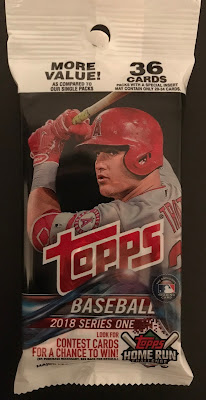 After a long day at work, I had to stop by Target for a few things on the way home, and they had some 2018 Topps baseball in stock.  It's been many months since I made a retail purchase so I decided to treat myself.  Picked up two of these 36-card hanger packs for $5.99 each, one to open tonight and one to sit on my pack shelf until a rainy day.

I'm not going to show all 36 cards, I'm sure you'll see them countless times on other blogs, but here are some highlights at least... 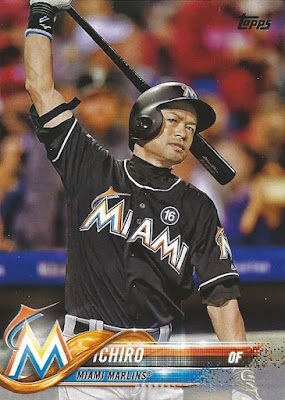 My first card out of the pack was a decent one for me, as I've always been an Ichiro fan. 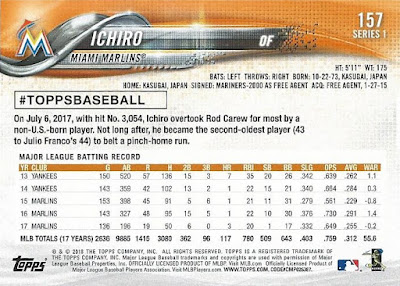 Here's a look at the back, the color along the top changes depending on the team which I like.  Unfortunately, while this card would have been one of the only keepers out of the pack for my collection, it's got a small bend along the bottom edge. 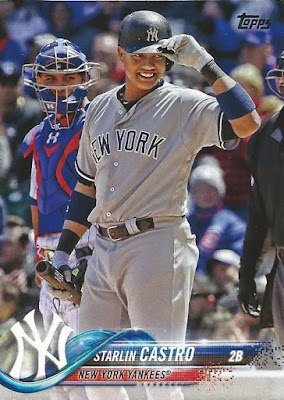 My thoughts on the design?  Well, I guess I'm one of those in the camp of "Topps flagship sets should have borders".  I will say that I like it more than the past two seasons, though that's not much of a compliment. 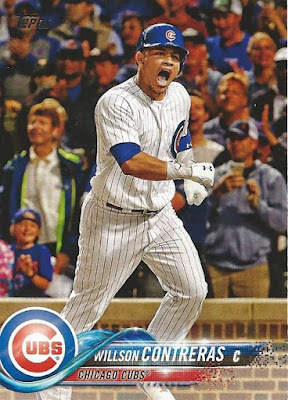 Honestly, I have no intention of completing the set, but really just wanted to see a small sampling in hand.  $5.99 for a 36-card hanger pack like this isn't a terrible deal, breaking down to less than 17 cents per card. 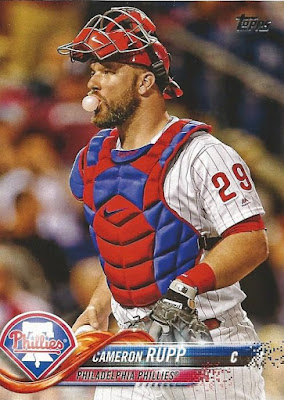 The photos in my first pack here weren't earth-shattering, but there were at least some interesting shots that you don't see every day.  The Starlin Castro 'tip o' the cap' card above, and Cameron Rupp here blowing a bubble, are good examples of that. 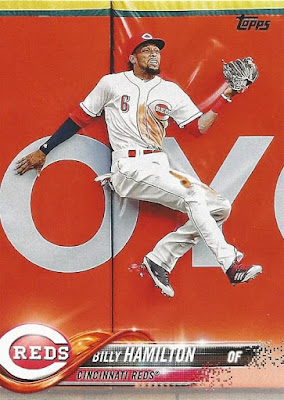 But the best photograph in my pack goes to Billy Hamilton, who's had some really great cards the past few seasons (I saw his 2017 Stadium Club card atop more than one blogger's top cards of 2017 countdown). 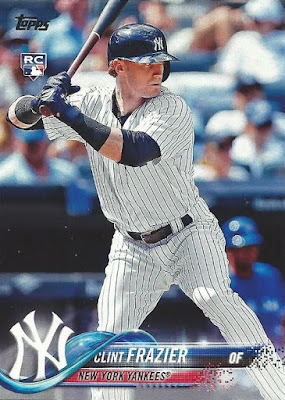 I got a whole lot of rookies for NL teams that I just plain didn't recognize at all.  Here's one of a player I am familiar with though, as I remember a fairly big deal being made about Clint Frazier upon his call-up last season.  He got card #7 in the set, I assume as a nod to Mickey Mantle? 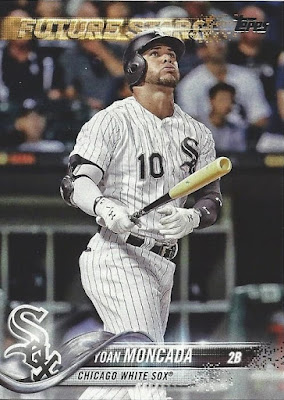 The logo used for the Future Stars designation is a bit odd this year, not sure how well it works. 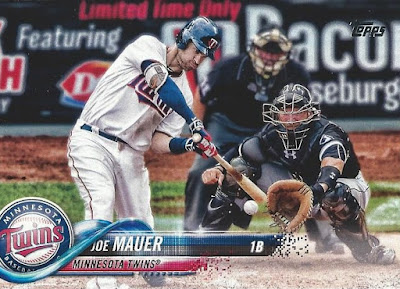 I did get a few interesting horizontally-oriented cards as well. 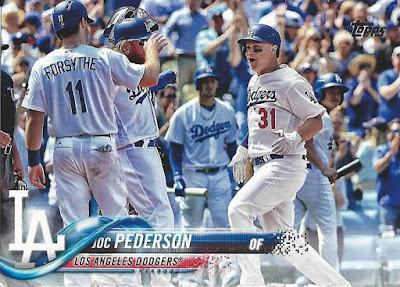 Not really sure what else to say I guess.  I'm just at a point in my collecting life where I don't get all that excited about the prospect of a new flagship Topps set every year.  It's not you Topps, it's me. 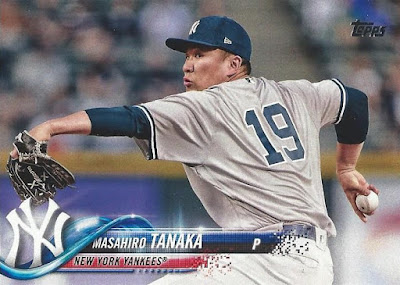 Based on my small sample size here, I do feel like this would be an enjoyable set to collect for those folks who still enjoy collating this release every year as a tradition or collecting rite of passage. 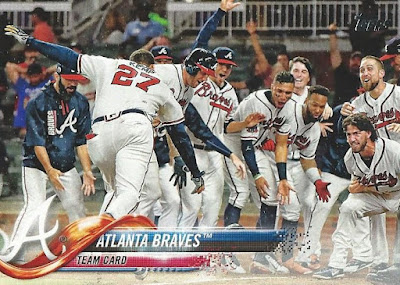 That's about all I've got time for in terms of noteworthy base cards.  I did get three inserts.  Traditionally, Topps inserts are pretty boring to me overall, did 2018 fare any better? 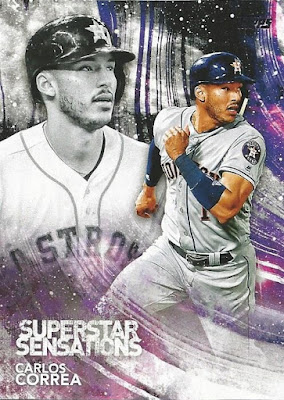 Eh, looks like more of the same with this one. 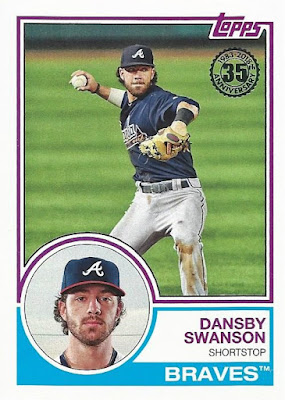 These 35th Anniversary 1983 inserts are well done.  I'm not one who creates customs or gets into analyzing fonts or anything like that, but overall they look convincing to me (including the backs).  Still, I won't be hanging onto this card, just not a fit for me. 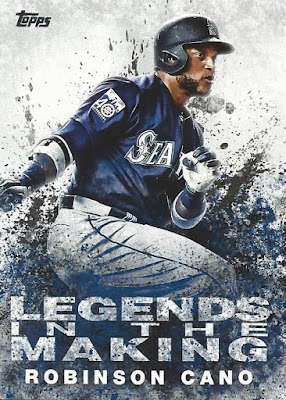 Here's the last one, yuck.

Well, there you have it.  Glad I only grabbed two packs, and won't be buying anymore.  Like I said though, that's as much because of where I'm at with collecting these days as it is a reflection on the product itself.  As I read others' opinions of the set in the coming days I expect to hear a lot of folks who'll say this is an improvement over the past couple of releases, and I agree.

Oh yeah, and out of 36 cards I received exactly zero Boston Red Sox.  Oh well...anyone know if there are buybacks this year?  Have you picked any of this up?  If so, would be interesting in hearing your opinion in the comments!
Posted by shoeboxlegends at 9:20 PM

I'm at least happy to see a 1980s design that isn't wood bordered...not that I don't love 87T, but as countless others have mentioned, Topps has beat it to death in recent years.

I haven't heard of any buybacks this year and if that's the case, then it's a shame as I really enjoyed getting those out of packs once I actually realized what they were. I've yet to get some 2018 for myself (will be doing that in a few weeks) but so far I'm liking most everything I've seen.

I'm at the point where I don't even want to see the inserts anymore. Just show me the base, man.

No buybacks this year. Maybe Topps ran out of cards

Ichiro was your first card? That HAS to be a good sign.

If that '83 Swanson is up for grabs, I've already pulled 5 of the '18 Sox base cards and 1 Rainbow parallel. Let me know if you'd be interested in making a trade!

I like that the 1983 subset has mostly on-card autos. Unfortunately my dude Trey Mancini is a damn sticker. Still, I'll be grabbing all the Jonathan Schoop parallels like I've done for every set he's been in.

I am in the same camp as the blogger. I pine for the days that Topps used borders, but in an interesting way. That's why for me, '71, '72, '75, '87 and 2015 are widely regarded as classic sets. I'm sorry, but this looks like another Stadium Club set that was designed by a 15-year-old. Don't give a hoot about inserts, never did.

I'm happy Topps seems to be cooling it on buybacks this year (no offence). I hope they put them in a low end product like Opening Day, where a kid who buys a pack might actually be happy to pull a 1990 Topps common, and keep them out of other products. They went a little overboard with them the past couple years.

Out of the last 4 years of Flagship Topps, this one I like the best. I think it would be great with a border.

I like the design enough. There seems to be some good photography but who's going to show the boring stuff, huh? I always buy a little just out of curiosity but I won't collect it. Like you, it's just not where I'm at.