The Colors of the Rainbow by Mark Kaz

Over the holidays I received another PWE of Red Sox from my buddy Mark Kaz, and boy was it colorful... 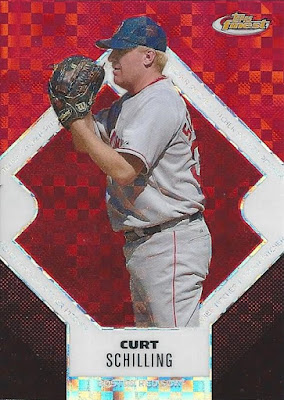 I've been showing a lot of X-Fractors from the 2014 Finest release of late, and here's one from the 2006 set.  They were serial-numbered to /299 this season.  A nice refractor that matches the coloring of Schilling's famed bloody sock! 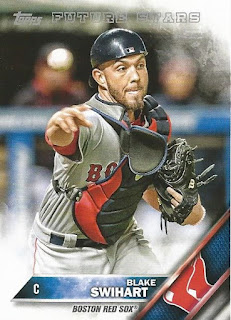 The last PWE I ran through from Mark contained a 2016 Topps Mini card, and he must have run across a small stash of them because this one included a few more to join it.  Future Stars Blake Swihart is the first. 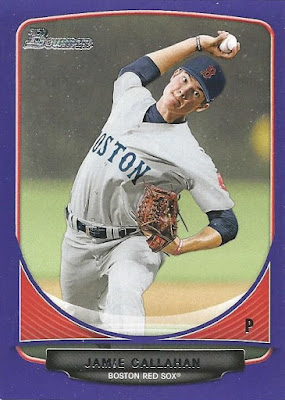 Jamie Callahan never made the Majors with Boston, and they ultimately traded him to Mark's favorite team, the Mets, in the summer of 2017.  He got into 9 games with New York that season, but that's the extent of his MLB exposure to date.  He was granted free agency back in November, so we'll see what happens for 2019.  Either way, this is a nice Purple parallel of his Bowman Prospects card from 2013. 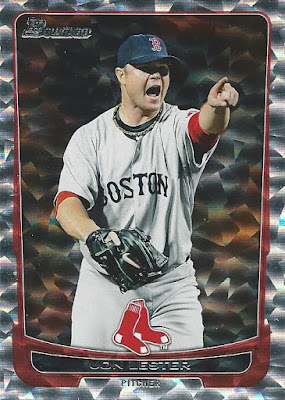 This Jon Lester is the second Silver Ice parallel I've acquired from the 2012 Bowman set now.  I found out when adding this to my collection on The Trading Card Database that there are 9 Red Sox on the checklist.  Now I badly want to track down the remaining 7, as that would make for a fine looking page in my Red Sox binder! 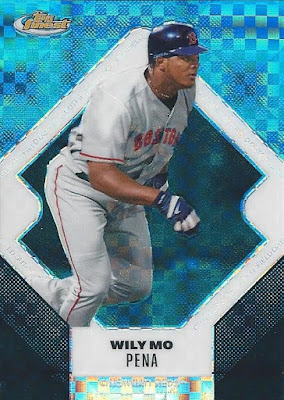 Here's one that's a mystery to me.  This X-Fractor is from the same 2006 Topps Finest set as the Schilling that I led off the post with.  What's strange about it, though you can't really make it out in the scan, is that the team is listed at bottom center as the Cincinnati Reds.  The Reds traded Pena to the Sox at the beginning of the '06 season.  If they already had a photo of Wily Mo with Boston, why list the team as the Reds still?  I don't get it. 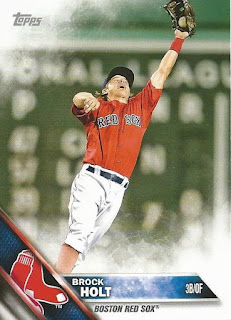 Another Topps Mini here, a shot of a lunging Brock Holt with a nice Green Monster backdrop to boot. 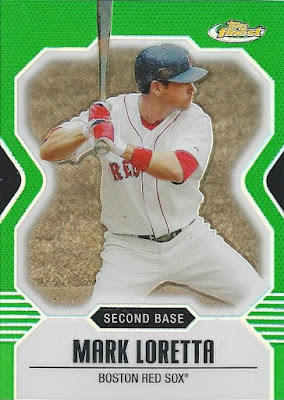 From 2007 Topps Finest, a Green Refractor of one of the last second basemen of the pre-Pedroia era, Mark Loretta.  I love getting all these Finest cards from the time when I wasn't collecting at all, Mark nailed it with the selections for this PWE. 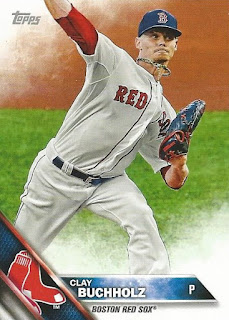 One more Topps Mini for tonight.  I'm well on my way to a team set thanks to Mark, when I have some hobby funds available I'll have to see what the remaining ones I'm missing would set me back on COMC... 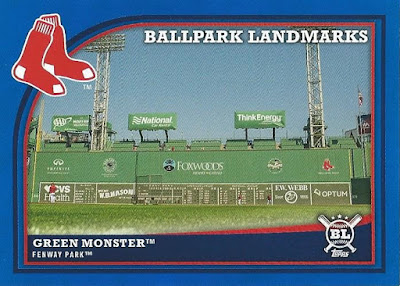 This completely awesome Blue parallel from 2018 Topps Big League might be my favorite card of the entire PWE.  Topps' colored parallels are so much more effective and aesthetically pleasing on sets that actually have decent borders, and this one is proof of that for sure.  I've spent many memorable days and nights in the presence of this wall, including ballgames and concerts in the past year alone.  Yup, this is my favorite card of the PWE for sure. 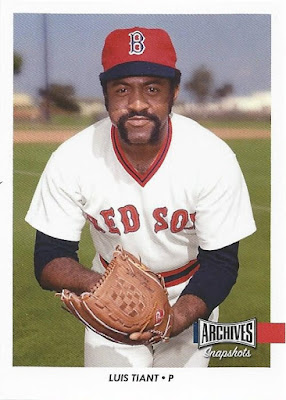 A close second though would probably be this Luis Tiant, from the 2017 Archives Snapshots set.  What a great photograph, Tiant was really burning a hole in the camera here.  I'm really amazed by Mark's generosity at this point.

Finally, there was a single buyback included as well.  As buybacks go, this is obviously right up my alley, being both a Red Sox player and hailing from the 1990 set that I'm trying to complete in buyback format.  The thing is, it's so up my alley that I already have a copy.  No worries though, I've already got a destination in mind that I know will be a good home for this card.

Mark, you truly outdid yourself with this batch.  I think this was one of the more enjoyable PWEs you've ever sent me in all the years we've been swapping cardboard!  I'm glad you enjoyed the cards I sent in return, and I'll be sure to get another round out to you soon.

Thanks for stopping by everyone!
Posted by shoeboxlegends at 11:30 AM

Don't pull the trigger on any of those '16 Topps Minis yet, Shane. I've still got a few more for you in the stack :)