As I take stock of the state of my collection to begin 2018, one aspect I know I'll be continuing to make progress on is my buyback franken-set.  I finished 2017 with just over 900 total buybacks in my collection (908 to be exact), and with my franken-set 65% complete.

Before we turn the calendar to 2019, I'd like to see those numbers at 1,500 total buybacks, and 80% complete on my franken-set.  I think I have enough buybacks stockpiled to hit the first mark already, but time will be the big question there, as 600 or so buybacks is quite a load to review in a single calendar year.  The second number...well...that will come down to odds as it obviously gets more and more difficult to find needed numbers for the franken-set the closer it gets to completion.

Alright, enough blabbering, let's see the first buybacks of 2018 and take a look at how they fare in terms of the franken-set binder... 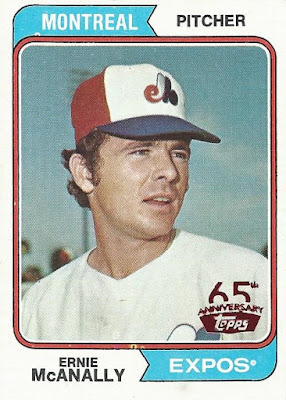 1974 was actually Ernie McAnally's final year in Major League Baseball.  I guess nobody was impressed enough by his 6-13 record and his WHIP of greater than 1.4 to give him another shot.  As much as I enjoy Expos cards, this is far from the best that '74 Topps has to offer. 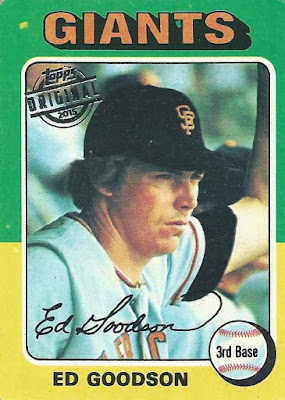 Standing in McAnally's way is a '75 Ed Goodson buyback. 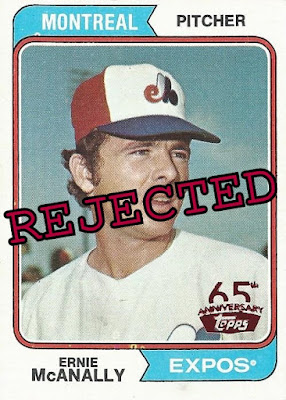 Absent any real reason for me to include him, Ernie loses out in this battle. 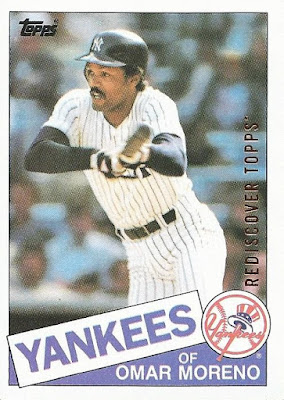 Next we've got a 2017 Topps buyback of Omar Moreno illustrating the art of the bunt on his '85 Topps release.  1985 was the best of the two and a half seasons Moreno spent in the Bronx, but at this point in his career his best days (and his threatening speed) were behind him. 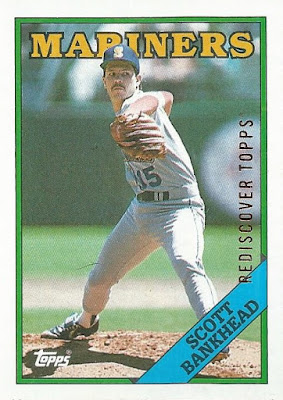 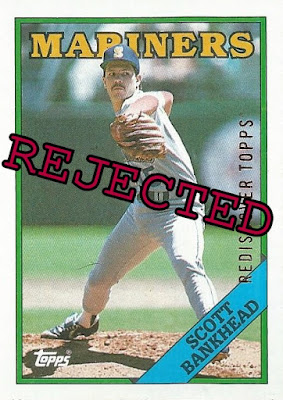 A relatively bland card, I'm ousting it in favor of the Moreno. 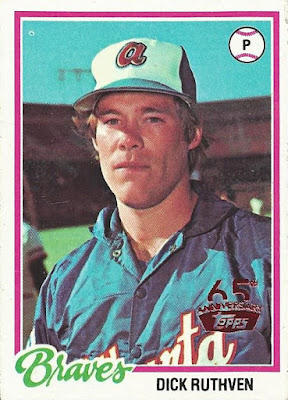 Here's pitcher Dick Ruthven rocking a warm-up jacket on his 1978 release.  After a dismal start to his '78 season (2-6 with an ERA north of 4.00), the Braves dealt him to the Phillies.  Ruthven really responded, lowering his ERA to 2.99 with the Phillies, and going 13-5 over the remainder of the year. 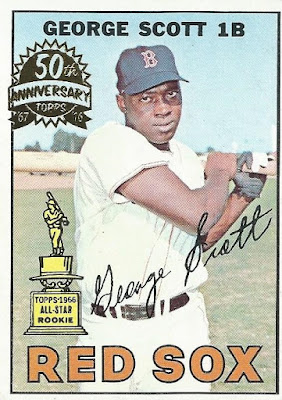 As far as the franken-set goes though, #75 is not a number you want to be assigned as a prospective entrant, as it means you have to do battle with this completely awesome '67 George Scott featuring the All-Star Rookie Cup. 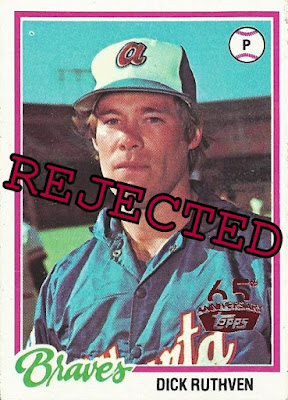 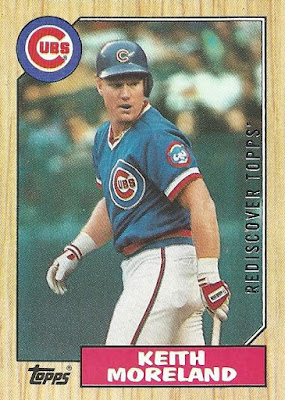 After three consecutive battles to lead off today's post, we have our first new number for the binder thanks to Keith Moreland here.  I don't know much about Keith quite honestly, but he did win a World Series with Philadelphia in 1980, and did color commentary for the Cubs' radio broadcast for a few years.  Maybe not the world's most interesting buyback, but it doesn't need to be either, Moreland makes the cut by default. 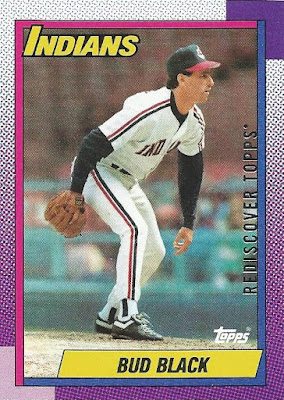 Nice, my first 1990 Topps buyback of the new year is pitcher Bud Black, from his first of two stints with the Indians.  Bud's become a respected coach at the Major League level, and after many years at the helm of the Padres is now serving as the manager of the Colorado Rockies. 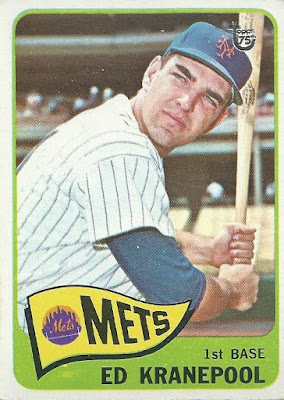 Another brutal franken-set matchup here though, as I really like this '65 Ed Kranepool quite a bit. Easy solution there as I'm happy to welcome Bud to my separate 1990 Topps buyback binder! 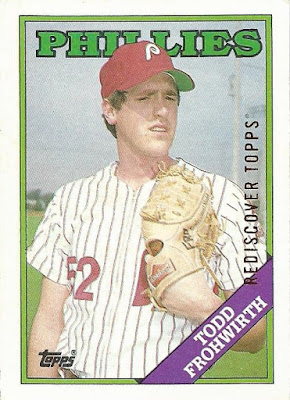 Todd Frohwirth looks awfully concerned here on his 1988 Topps card.  I don't recall much about Todd as a pitcher, though I certainly remember his unusual last name from my kid collecting days.  Sadly, he passed away earlier this year at the much-too-young age of 54.  This is my first #378 buyback to date, so Todd is now residing in the binder. 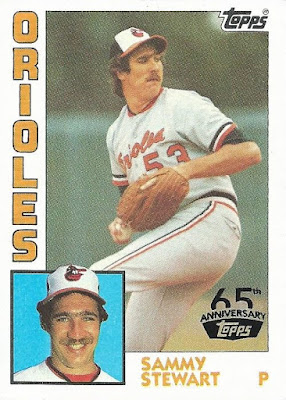 I haven't heard much news in the past couple of years about Sammy Stewart, who certainly had a rough go of it in life.  He's out of prison now, I'll assume no news is good news and that he's working to get his life back on track.  Stewart is an official member of the franken-set for now, lacking any competition for slot #59. 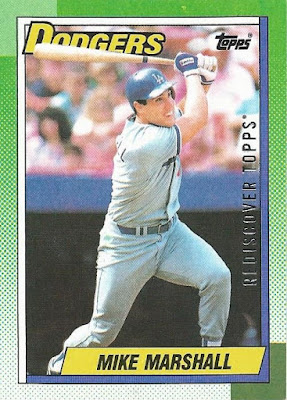 Mike Marshall was going through a trying time of his own career-wise when this card was printed up.  The Dodgers traded him to the Mets in the '89 off-season, but he'd only last in New York until July when he was dealt again to the Red Sox, who then released him the following season. 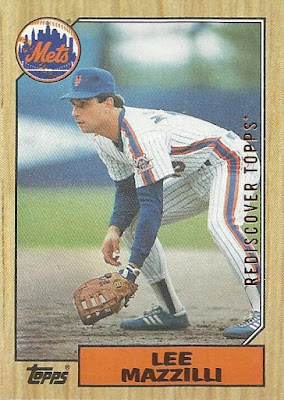 This '87 Lee Mazzilli was already in pocket 198 of the franken-set binder. 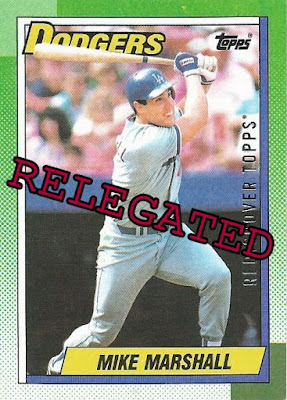 Since I can't make an overly-compelling argument for either, I'll take the easy way out and slot Marshall into my '90 Topps binder. 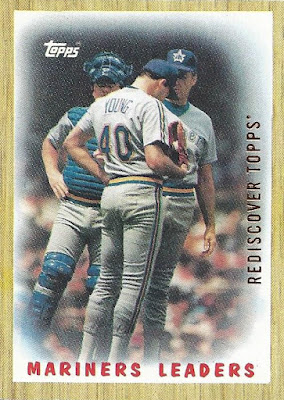 Today's penultimate card is the '87 Topps Mariners Leaders.  The Mariners finished fourth in their division in 1987, with a losing record.  On top of that, I don't think the leaders subset in 1987 Topps works particularly well.  Pretty much any competition should be enough to keep this one out of the binder. 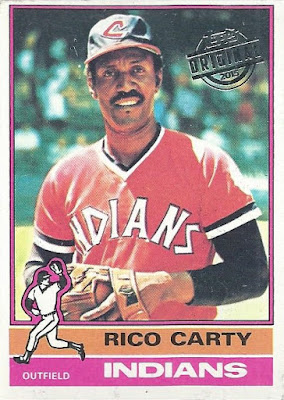 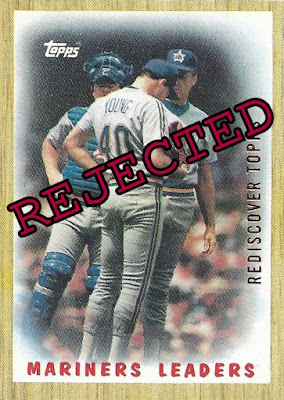 ...is certainly more than enough. 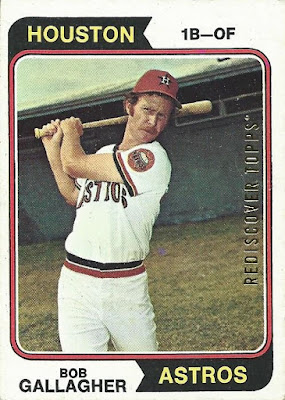 We'll wind it down here with a '74 Bob Gallagher.  Bob's MLB career was brief, debuting in 1972 with the Red Sox and appearing for the final time in '75 with the Mets.  I'm not sure what the (tilted) backdrop is here, some kind of blue barn? 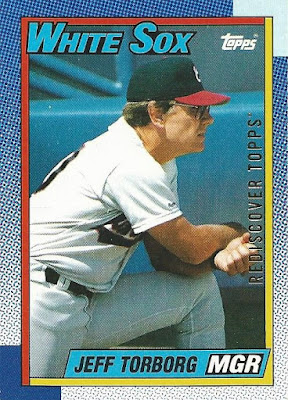 I only just slid this Jeff Torborg buyback into slot 21 of the binder in my last franken-set post. 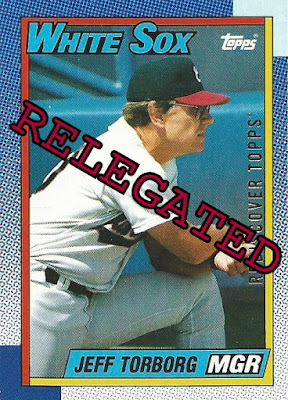 Torborg most certainly had one of the shortest tenures in the franken-set so far, however he's found a good home in my 1990 Topps buyback binder so all is well.

Nothing all that earth-shattering here, though I didn't expect that since all of these came from bulk lots.  Nevertheless, I added three new numbers to the binder and saw three new buybacks join the 1990 binder as well, so I'd say that's a solid start to the year!

My aunt went to high school with Keith Moreland, so there's another random factoid for you!

I don't know what Gallagher is in front of, but it looks an awful lot like the restrooms at the Dutchess County Fairgrounds in Rhinebeck, NY!

65% completion is impressive-and I always enjoy reading your decisions. Keep it rolling in 2018, and good luck getting to 80%!