On the baseball front it's been all about the vintage up until this point, which isn't surprising.  There are plenty of modern cards that I enjoy as well however, and today I've got a pair of them to induct into the Keepers collection... 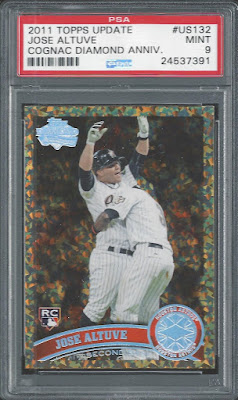 Yes, it's everyone's favorite parallel from 2011, the Cognac Diamond Anniversary cards, also sometimes referred to as "liquor-fractors".  Even eight years later, I can still remember and completely understand the hype that existed around these, and their Platinum Diamond Anniversary brethren.  I haven't seen a parallel this attractive in a Topps flagship set in the time since!

I've got a handful of these, many of which are the retired legends short prints, but two in particular stand above all the others and merit addition to this collection.  First up, Jose Altuve's RC.  I picked this copy up back in 2016 for the unbelievably low price of $19.  Nowadays it's worth around ten times that much, not that I plan to ever part with mine (that's kind of the point of this exercise, after all).

If you think that was a fortunately timed purchase, the other card in tonight's post blows it out of the water... 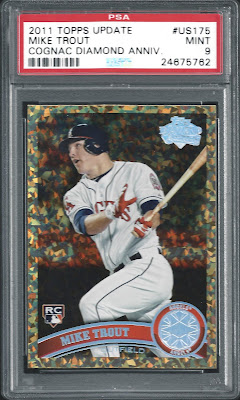 A couple months before I grabbed the Altuve, just before the start of the 2016 MLB season, I snagged this Mike Trout for $189.99 with free shipping.  At the time it was one of the most expensive single cards I'd ever purchased, certainly top five.  I didn't mind ponying up given that Mike had already secured a Rookie of the Year and an MVP award before I grabbed it, and at a young age seemed poised to continue to perform at an elite level for many, many years.  I had a gut feeling that if I didn't grab one of these then, I might never get one.

Well, in the season immediately after I acquired this, Trout earned his second AL MVP award, and he has continued to be arguably the top overall player in the game since.  Still just 28 years old, he's already cemented himself as a legend of the game.  After nine seasons in Major League Baseball, his career OPS is 1.000, and his career slugging percentage is .581.  Yes, you read that right.  He's also got 200 stolen bases, and we all know he's the king of WAR.

A solid pair of additions to this project today, and I can confidently say that if circumstances forced me to condense my baseball card collection in extreme fashion these would both make the cut.  The Trout in particular has become somewhat of an iconic card already.  Maybe one of the most recognizable/important baseball cards of the 21st century so far?

That's 11 cards down in the Baseball Keepers collection altogether now, 989 to go.  You can see the virtual album here if you're interested.

I'll be back with more keepers soon, in the meantime thanks for stopping by!
Posted by shoeboxlegends at 6:00 PM

Awesome pair of cards! I still need to score myself one of them Altuves someday.

Wowza. Every time I see someone write about their Trout, I can't help but think about how I dropped the ball so badly by not picking up a copy back in the day.