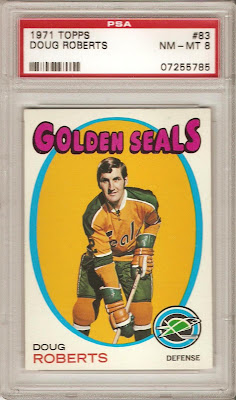 1971 Topps - #83 - Doug Roberts - California Golden Seals
This card is special to me for a number of reasons. For starters, 1971 Topps/O-Pee-Chee hockey is one of my favorite hockey card designs of all time, a set that I would love to complete someday. There's just something about the circular frame-type border and the bubble letters that are used for the team's name that strikes a chord with me.


This particular card earns extra points in my book because the California Golden Seals no longer exist as an NHL franchise, and haven't since 1976. Any card, baseball or hockey, depicting a team that's no longer in existence has an extra level of appeal in my eyes. The California Golden seals didn't last long in the NHL, they were only around from 1967 - 1976. They had a pretty cool logo though. I wish the NHL would've revived this franchise in the early to mid-90s, rather than expanding into areas where hockey just hasn't caught on (cough, cough, Florida Panthers, cough, cough).


The real reason I spent $5 on a graded version of this card though is because Doug Roberts is someone whom I met and even talked hockey with numerous times growing up. Every summer my brothers and I would load up my mom's huge Chevy Astro van with our hockey gear and head off to hockey camp at Connecticut College down in New London, Connecticut. This basically consisted of a solid week of just playing ice hockey and street hockey, swimming and hanging out with other kids my age who were also into hockey. It was one of the highlights of my summer each year.


Doug was the hockey coach at Connecticut College from 1980 - 2000 and was always a presence at the camp, along with his brother Gordie (who also had some NHL experience), giving on-ice advice to all of us. It's been quite a few years since I stopped playing hockey, but I have a lot of fond memories of playing while growing up, and going through practice under the watchful eye of Doug Roberts is one that I'll never forget.
Posted by shoeboxlegends at 4:11 PM