Time for another addition to my ever-expanding 1953 Topps set.  Today I've got card #117, Sid Gordon of the Boston Braves: 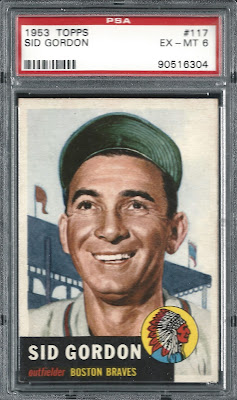 Sid was a Jewish kid from Brooklyn, growing up in the Brownsville and Flatbush sections.  He was a star baseball player in high school, and after graduating he was signed by the New York Giants after a scout saw him playing sandlot baseball! 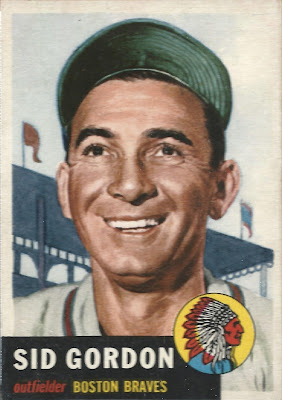 By the time his career was over he had gained a reputation for having a good eye at the plate, combined with above average power.  He's still within the top 5 Jewish baseball players of all time in categories like career home runs and career RBI. 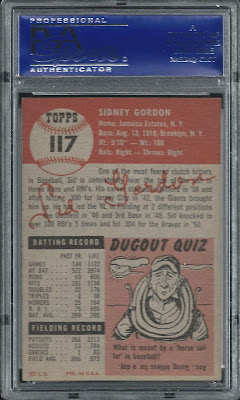 Sid passed away in 1975 doing what he always loved, playing the game of baseball (well, technically softball in this case).  He suffered a fatal heart attack during a game.  Gordon was just 57 years old at the time.

That's crazy he died playing, nice write up for a great looking card.

That's crazy he died playing, nice write up for a great looking card.

Sid definitely has a place in my Jews on Cards collection. "The Baseball Talmud" has him ranked as the 7th greatest Jewsih ballplayer of all-time.