Buyback Franken-set: Randoms from a Mega-lot

For the next installment of the Buyback Franken-set project, I've got ten randomly pulled cards from a huge lot (hundreds) of 2017 "Rediscover Topps" buybacks that I landed a long while back but haven't really looked through yet.  Literally just opened the 600-ct box they came in again last week, and pulled ten without looking.  Let's see how we did... 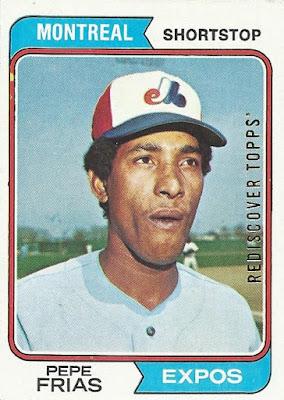 Off to a good start, given that the majority of the buybacks from Topps' 2017 promotion were from 1980 or newer.  I always appreciate a good Montreal Expos card, too.  Pepe wasn't exactly lighting the baseball world on fire in his second season in the big leagues in '74, but it's a cool card nonetheless.  Good shot at franken-set induction, right? 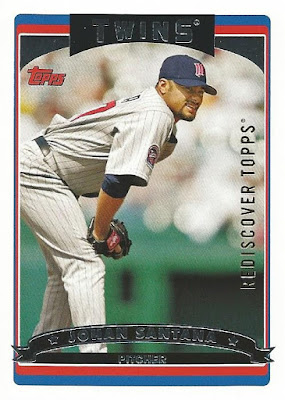 Oh man, I didn't see this one coming at an obscure card number like 468, but here we have a Cy Young winner, and not just that but this is his flagship card from the year of his second (and final) Cy Young win. 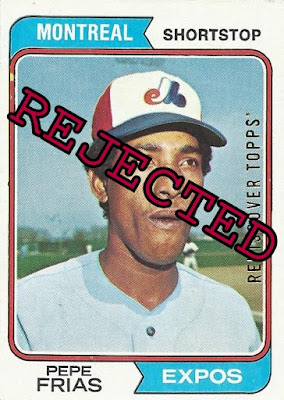 No contest here, Santana in a landslide! 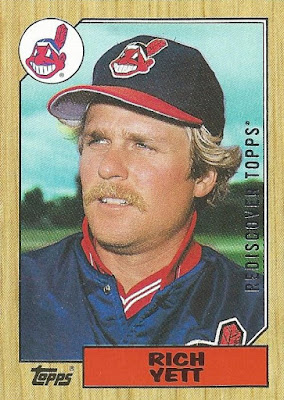 Rich Yett on what amounts to a pretty boring example of 1987 Topps if I'm being brutally honest.  Even that warm-up jacket isn't enough to save this one.  No chance for the binder I'd assume... 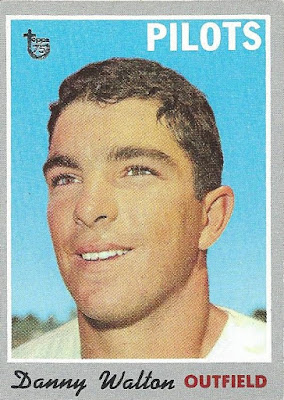 ...and I'd assume correctly.  Even though I'm not a fan of cap-less ballplayers on my cards, there's no way I'm ousting a Seattle Pilot from the binder... 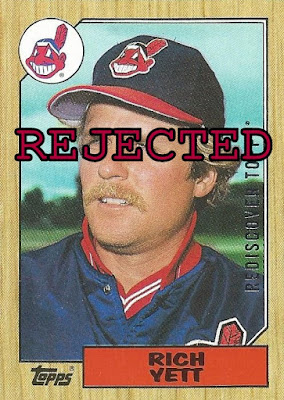 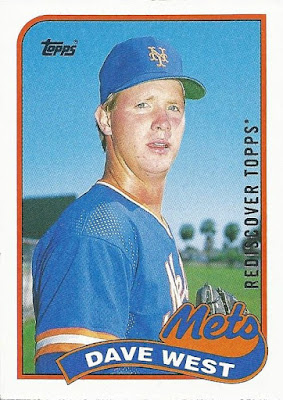 A buyback of an obscure pitcher with a sub-.500 career record who I know next to nothing about given that he played the majority of his career in the NL?  Well, the thing is this one's a nice high card number at #787, high enough to be located on the final page of the binder in fact.  This is my first #787 buyback, so Dave West is in by default! 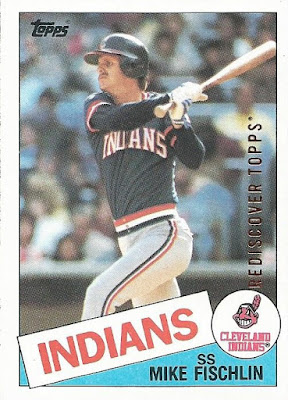 I was excited to pull a few 1985 buybacks within the selection in today's post.  Without crunching the numbers, I can tell you that it's one of the least-represented Topps sets in the binder at this stage.

The subject of the first one isn't all that exciting though, as Mike Fischlin hit exactly the Mendoza Line in 69 plate appearances in '85. 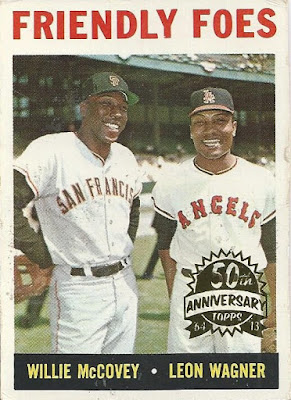 On top of that, he draws an absolutely brutal match-up for the franken-set at card #41. 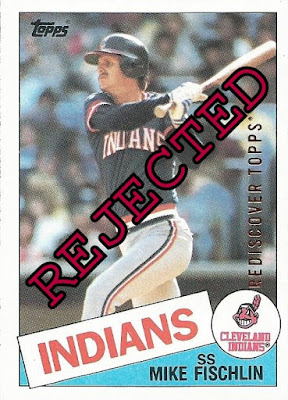 This one was so one-sided I almost used a new "stamp" with more aggressive language than REJECTED.  DECIMATED?  DEMOLISHED maybe?  Something I'll keep in mind for future franken-set posts. 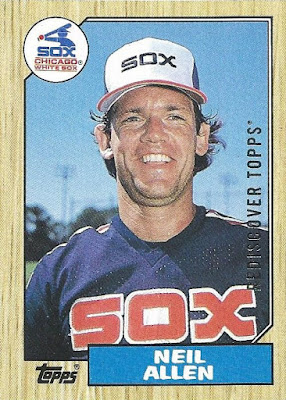 A smiling Neil Allen greets us next, courtesy of his 1987 Topps issue.  Neil had some decent years as both a starter and out of the bullpen, but played on some pretty awful teams.  Doesn't seem to have gotten him too down judging by this photograph!  That's a smile I could see in the franken-set, but... 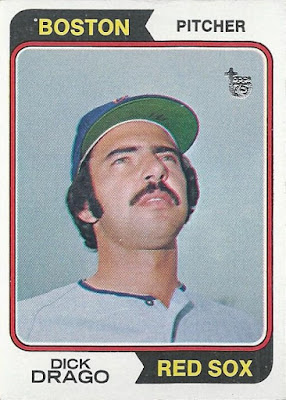 ...I'm sort of partial to this "so bad it's good in a weird way" 1974 Dick Drago that's already in slot 113.  It's not that this is an untouchable card or anything as far as this project goes... 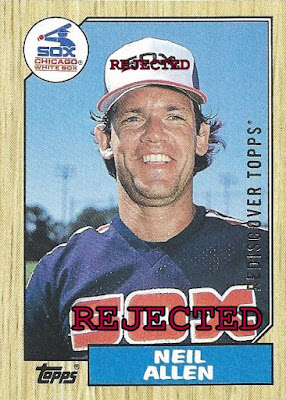 ...but I do prefer it to the Neil Allen. 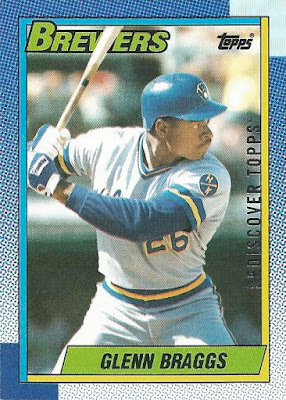 Sweet!  Always happy to pull a new 1990 buyback of any sort given my insane quest to attempt this entire set in buyback format.  I was actually hoping that I already had a decent #88 buyback in the franken-set binder so that I could shift Glenn Braggs here over to my dedicated 1990 Topps buyback binder.  As it turns out though, this is my first #88 buyback, and fills an empty slot in the franken-set.  That project takes priority over the '90 Topps buyback set right now, so into the franken-set he goes. 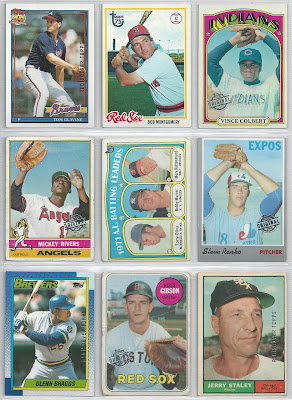 The best part about this one is that it also completes a new page!  I absolutely love the variety here, with the only repeated set being 1972 Topps, one of my favorites of its decade, and of all-time. 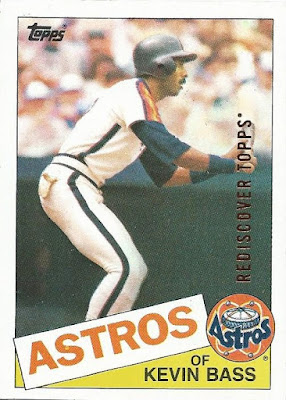 Here's another '85 I grabbed in this bunch.  Kevin Bass is certainly a better subject, maybe this will be the card that gets 1985 Topps some representation in the binder? 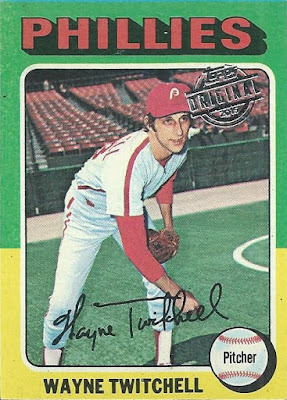 Ah man, tough break.  I guess you could argue that Bass is the better player of the two (is this the first time in history anyone's posed the question?  probably!).  I just like the '75 design so much better than '85.  The difference in crispness between the two photos is pretty evident here too, Bass looks kind of unfocused/washed out. 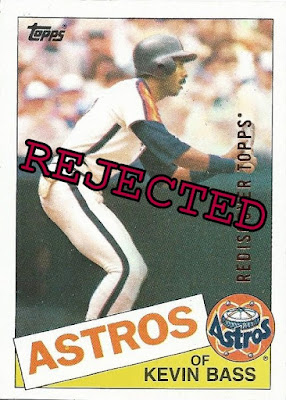 In the end that was the difference, and sealed Kevin Bass' fate... 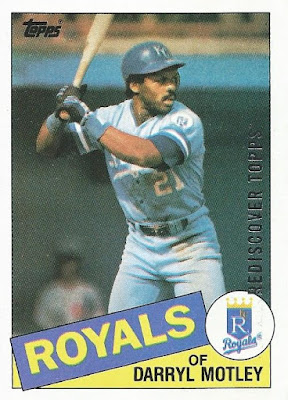 But wait, we have one more attempt from 1985 Topps to crack the binder!  I'll be honest, I don't know the first thing about this guy, and I can understand why as he was effectively done in Major League Baseball by the time I was old enough to become a fan.  I'd say this card is a long shot at best... 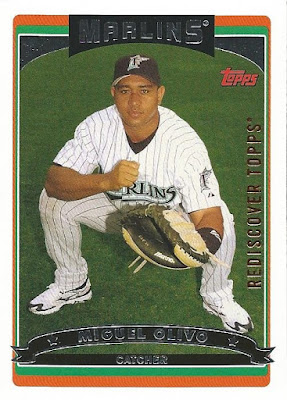 Now, the existing buyback in slot 561 isn't exactly one to write home about either.  Had the '85 been a stronger candidate I'd have bumped this one, but I think 2006 Topps, and the Florida Marlins especially, each have even less representation in the franken-set than 1985 Topps does at this point. 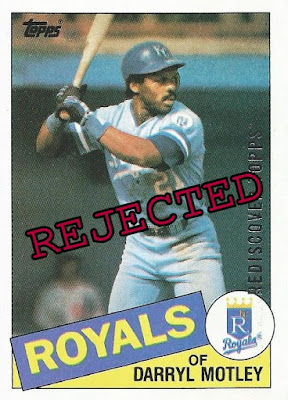 In the interest of variety, Miguel Olivo keeps his place. 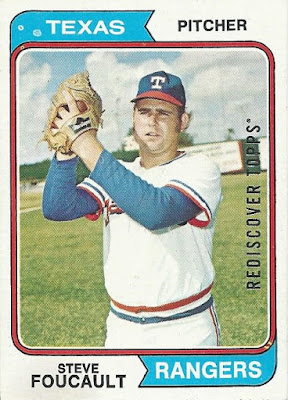 Today's penultimate buyback is Steve Foucault's 1974 issue.  Pretty good sign that I've pulled two '74s randomly from this lot already.  I like the classically-'70s tilted background and advertising on this card.  This one worked out great too, because in slot 294 prior to this... 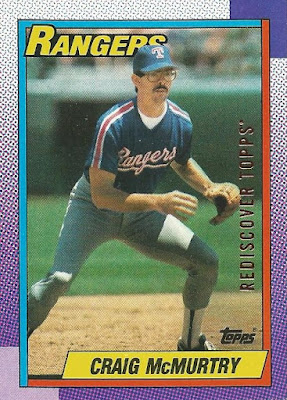 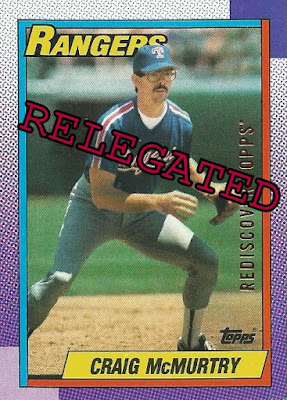 ...and this one gets bumped to my dedicated 1990 Topps buyback set. 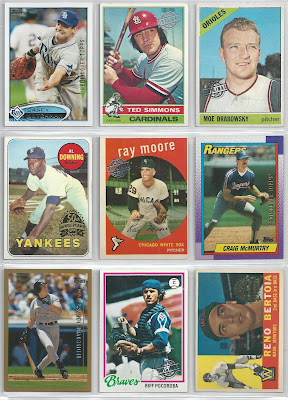 Since this card number is part of a complete page, here's a look at the before, with 1990 Topps Craig McMurtry mid-right... 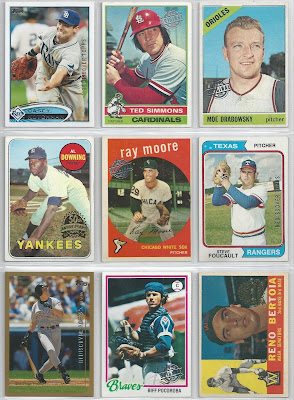 ...and here's the updated scan, with the '74 having supplanted it.  No HOFers to speak of here, but some very solid players from multiple eras for sure. 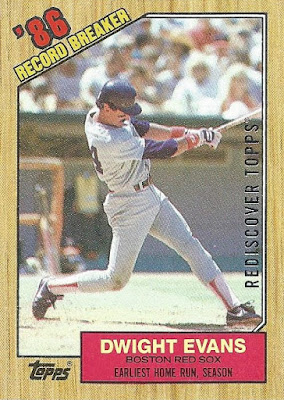 Last card is a great one for this Red Sox fan, a nice Dewey Evans Record Breaker subset card from 1987 Topps.  If you've followed this series for very long though you may remember... 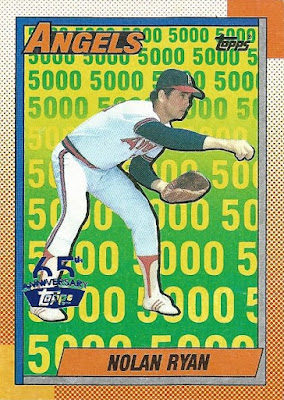 ...that Nolan Ryan has a stranglehold on the first page of the binder, due to the 5-card Ryan run that kicked off the 1990 Topps release, the first baseball card set I ever collected as a 7-year-old kid. 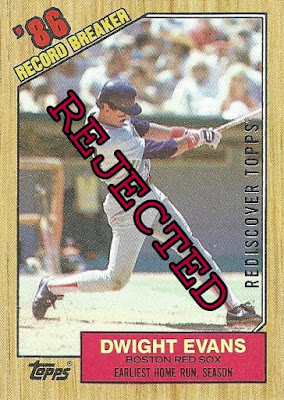 No contest there, it's going to take something much more significant than Evans to bump Nolan Ryan from his place.

That was a successful run.  After striking out quite a bit lately on adding new numbers to the binder, I picked up two in this one post.  On top of that, I had a couple of combatants battle their way into the binder, and increased my 1990 Topps buyback set by a single card as well.  Not a bad day at the office.

Thanks as always for stopping by, and I'll be back soon with another batch of buybacks!

Always nice to see a really high number get filled!

Holy shit - where did you find a 600 count box of buy backs? I am jealous. And two: dibs on the bunting Bass if I can place dibs on it.

I've been wondering when you would do another buyback frankenset post! Definitely agree with these choices (rich yett? not with those stats!)  We've got to get you a 1985 buyback that will stick. Clemens RC maybe?

How about instead of stamping "REJECTED" for those overmatched buybacks, you could just post a gif of Dikembe Mutombo's finger wag, lol.

That "Friendly Foes" buyback is spectacular. Hard to imagine anything taking that one down.

Heh. I like your idea to use a different word when a card stands no chance. Along with your suggestions, maybe a boxing term like "K.O." would work. Or a Batman-style "POW!"