The Patriots are coming off their bye week and taking the show on the road to Philadelphia to face the 5-4 Eagles in the second slate of games today.  We're back to featuring a card of the opponent as far as my football project goes, as I was able to pick up this beauty a couple of months back... 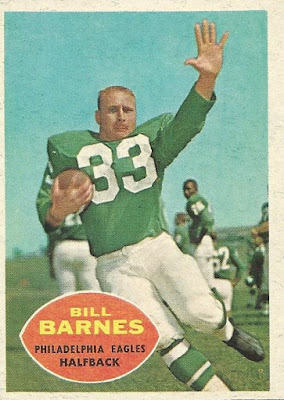 This is my first 1960 Topps football card, and I'm a fan of the minimalist design that allows the photograph to really shine.  To be fair, many of the other cards I've seen from the set are not as interesting as this one, but I really dig this shot of Bill Barnes presumably waving to his mom on the sidelines.

I like that the photograph was clearly taken at some sort of practice or exhibition too, evident by the number of folks just milling around in the background.

As for the card's subject, Bill Barnes was no slouch, having been named a Pro Bowler for three consecutive seasons prior to this card's release.  He was instrumental in the Eagles winning the NFL Championship the very season this card was printed up, as a matter of fact! 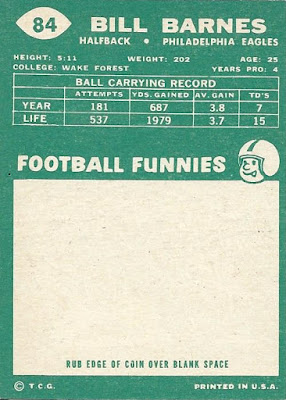 Gotta be honest, the design for the back sort of pales in comparison to the front.

I'll be back next Sunday with another card towards this project...
Posted by shoeboxlegends at 12:15 PM

That's a great card from my Birthday year of 1960.

If you want that back to stand out, you gotta get a coin and rub it ;)