Earlier this year I picked up a lot of 100 random packs from Wal-mart's website for the reasonable price of $40.  I had a lot of fun ripping through all the packs and posting the highlights here on the blog.  Way back at the beginning of August I posted the final batch of those packs.  Or did I?

I turns out the seller was pretty gracious and actually included well over 100 total packs in the box, which is pretty cool.  So, a few months later let's look at that overflow and finally call this round of posts done, shall we? 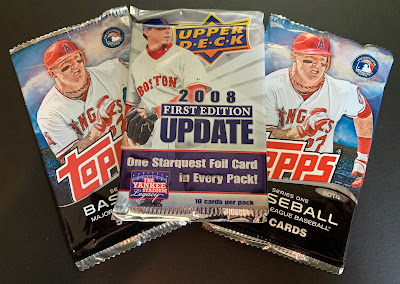 As with before I'll handle these in batches and show only the highlights.  First up, a couple packs of 2014 Topps, and a 2008 Upper Deck First Edition Update. 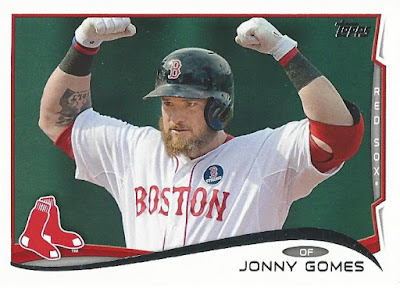 The Upper Deck pack was a total dud, which doesn't sting so bad at a price point of 40 cents.  One of the two Topps packs yielded this Jonny Gomes however, a card which was surprisingly missing from my team collection.  I'll take it! 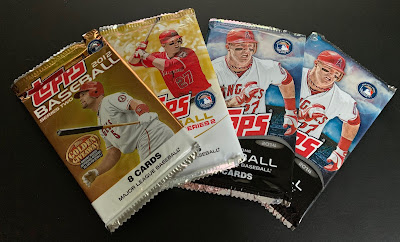 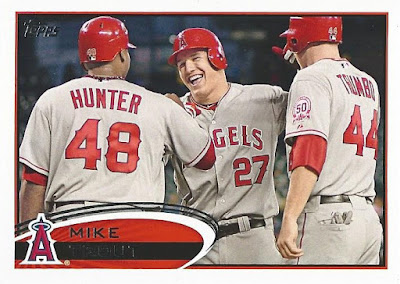 Only the 2012 pack yielded anything of interest to me, in this second year Mike Trout card.  This looks to be about a $4-$5 card looking at COMC, so I'm not going to retire by cashing this in, but might make a nice throw-in for a future trade package anyway. 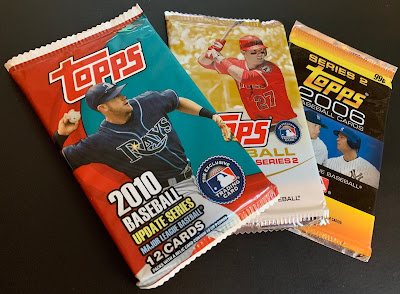 Unfortunately there was not a keeper to be found for me within these three packs.  Can't win 'em all! 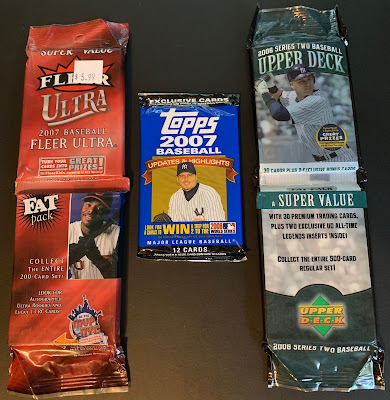 Here's where things take an interesting turn, a pack of 2007 Topps sandwiched between a pair of fat/hanger packs, one from Fleer Ultra and one from Upper Deck! 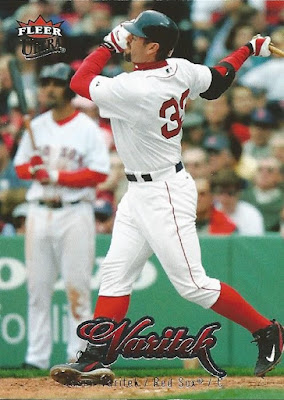 The Ultra pack was good to me, as it yielded a new Jason Varitek for my Red Sox collection.  I really like the full-bleed minimalist design from Ultra around this time, though I admit the designs all seem to blur together with the passage of time. 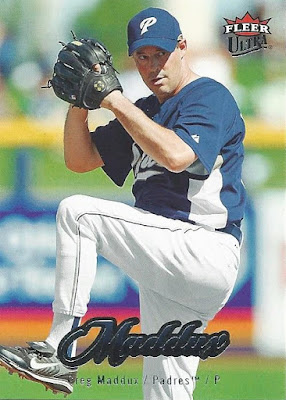 Also decided to keep this late-career card of Greg Maddux with the Padres.  I was an impressionable young baseball fan when he rose to prominence with Atlanta, so I've always had a soft spot for Greg.  At some point in the future though I could see myself sending this one out to another collector, not sure it's destined for the long haul here at Shoebox Legends World Headquarters. 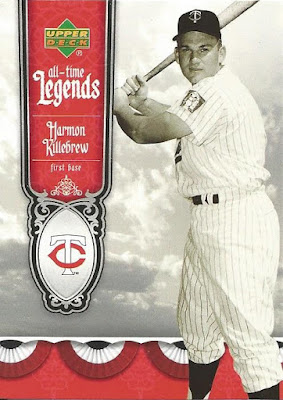 The Upper Deck pack was even more interesting.  Each half of the pack included one of these All-Time Legends inserts.  While not terribly creative in name or design/theme, I at least appreciate pulling some big names I'm familiar with.  The top half of the pack spit out this Killebrew... 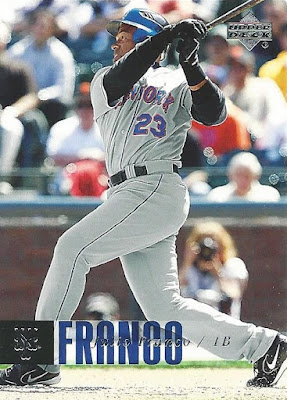 ...and this Julio Franco, someone I half-heartedly collect simply due to the age he stuck around in the Majors until (I half collect Jamie Moyer and Bartolo Colon for the same reason). 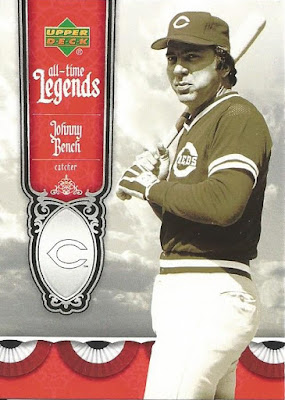 The bottom half of the pack contained this Johnny Bench from the All-Time Legends insert set... 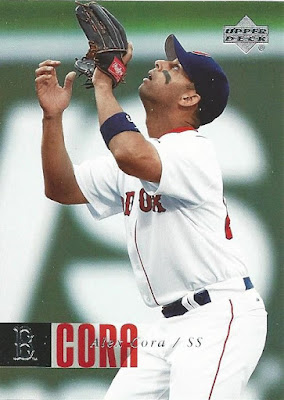 ...and a really neat card for my Red Sox collection, featuring current manager Alex Cora in front of a distant and blurred Green Monster!  Really happy to have pulled this one, easily my favorite card in tonight's post anyway. 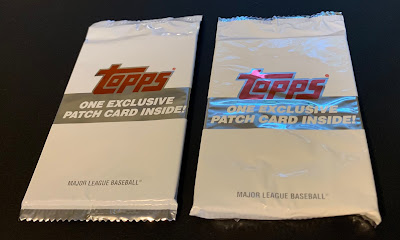 Perhaps the most interesting packs in the entire lot were these one-card exclusive patch card packs, which typically come as the guaranteed "hit" in a blaster.  I'm not big on manu-patch cards at all, but was hoping I could either pull a Red Sox card or two, or if not at least end up with some decent trade fodder. 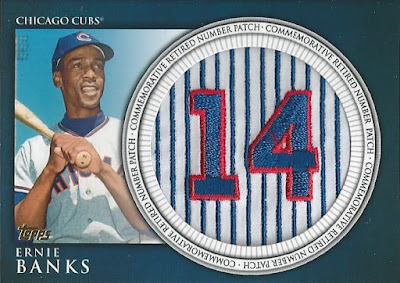 First up, Ernie Banks.  I suppose I'll be able to find a home for this one, there are enough Cubs and HOF collectors out there anyway. 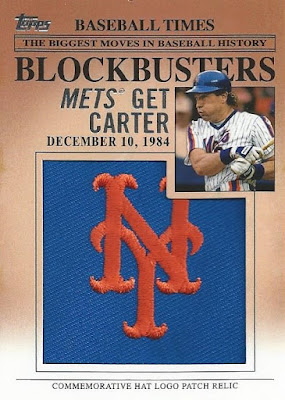 The other one I'll certainly be able to ship out, as I have two Mets collectors in particular that I've been trading with for quite literally years now.

So, in retrospect how was my experience overall with this gigantic re-pack lot of packs?  To be honest, I think this would have been a better fit for me years ago when I was into keeping any and every new baseball card that I didn't already have a copy of.  These days I just don't have the mental energy, and don't want to dedicate the required space in my house, to hang onto that sheer volume of cardboard.

The approach I took with these definitely helped though, as I retained only 87 total cards from this entire lot for my own collection.  Nearly all of the others have already been packaged and shipped out to my trading buddies over the past few months.  On the one hand, I'd have been smarter to use the $40 on something like a graded T206, but sometimes you just get the itch to rip.  For $40 these provided hours of pack-ripping enjoyment, and at least half a dozen blog posts.

In summary, not a deal I'd probably jump at again, but not one that I regret either.

That's all for tonight, but I've got plenty of awesome content coming up, including arguably the single greatest card I've ever been sent out of the blue in the entire time I've been running this blog!  Until then, thanks as always for stopping by...
Posted by shoeboxlegends at 7:30 PM

I've already got that Gary Carter, so it can go in the direction of the other Mets collector.

I remember my local Target having those fat packs of 2006 Upper Deck on clearance right around the time I got back into collecting baseball cards. I bought 'em up pretty quickly -- those All-Time Legends inserts were fun to pull back then.

I'm not all that impressed with these Walmart bundles to be honest. It just seems like an accumulation of packs I've already opened many times.

I've always liked the 2006 UD legends though. I bought a lot of '06 UD and those were my favorite cards. I've traded away much from the set but kept the Legends.

I purchased a pair of these bundles... but didn't receive any of those manufactured patches. Oh well... it was a pretty good deal for $40, so I can't complain.