Scratchin' that Itch - The Finale?

If you stop by this blog once in a while, you may have seen some of my previous posts containing the contents of the 100-pack re-pack that I purchased from Wal-Mart's online store earlier this year, for the bargain basement price of $40.

In July, when I posted about this last, I had finished opening 81 packs from the lot.  Out of those 81 packs, I'd ended up with 64 keeper cards for my collection, with the majority of the cards getting shipped out to other bloggers.

I've got 19 packs to get through today in order to finish things off, and I saved one or two of what I felt were the more interesting packs for the end.  One such example would be the 2006 Topps rack pack pictured here.

While only "mildly enthused" about the 18 2006 Topps flagship cards that are included, I was certainly curious about the promise of 3 extra "vintage" Topps cards. 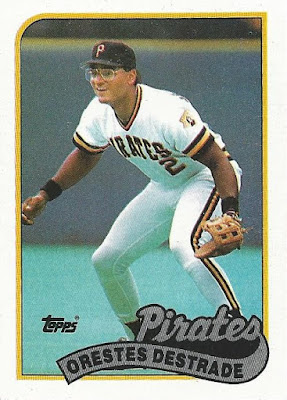 Now, I went in with low expectations, but this is worse than I thought.  I guess Topps defines vintage as "anything 25 years or older" maybe?  If so, this one would have just made the cut.  Except for the Red Sox cards and a few notable exceptions, my 1989 Topps baseball cards did not survive my collection purge that's been ongoing for nearly a year now.  This one's already been shipped out the door. 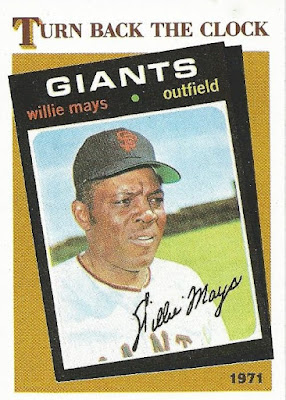 Alright, slightly better here.  Still right smack in the middle of the junk wax era, and not a card that meets my own personal definition of vintage (1979 or earlier).  I can't complain about Willie Mays though, and since I don't yet own a copy of his '71 Topps release this is the closest thing I've got.  I'll reluctantly hang onto this one, but the day a real '71 Mays falls into my lap it's headed for the trade/donation pile. 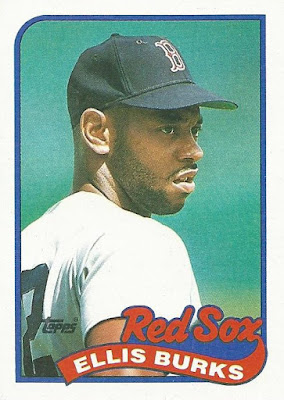 I guess this would be my favorite of the three promised cards.  Yes, I just railed on '89 Topps counting as vintage, but this one was at least a new-to-me Red Sox card to increase the count on that particular collection by one.

There wasn't a single card among the actual 2006 Topps cards in the rack pack that interested me.  I wasn't collecting in 2006, but I'd imagine there were more than a few folks complaining about Topps' choices for these vintage inserts.  How hard (and inexpensive) is it to get some commons from the '70s, or even '60s, at the very least? 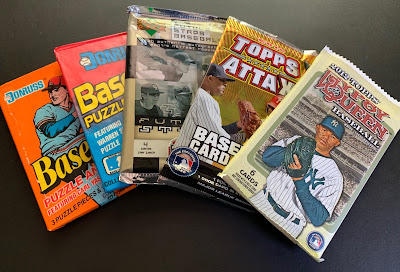 Another batch of five packs here, with some junk wax era Donruss, two products I have no interest in with UD Future Stars and Topps Attax, and a Gypsy Queen... 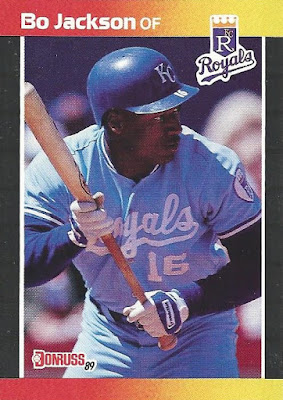 1989 Donruss continues to be my favorite product among these re-pack packs, which I would not have predicted at all going in.  I landed the great Bo Jackson... 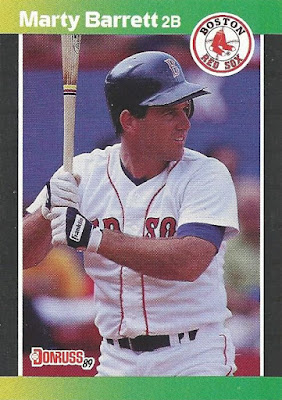 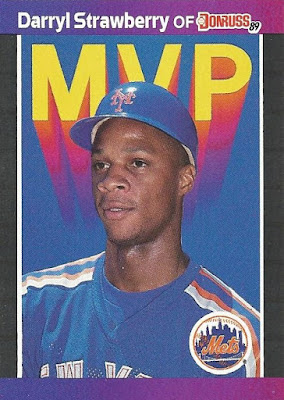 ...and this sweet Strawberry MVP bonus card all in the same pack.  The cards might be absolutely worthless, and there are certainly way too many of them out there, but I still have more fun opening packs from my youth than I do the modern stuff most times.  I'm not sure what that says about me as a collector. 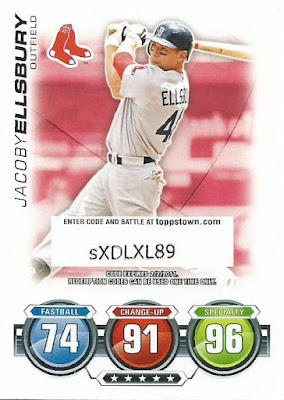 Despite my overall disdain for the way-too-busy Topps Attax line, the pack did yield me one keeper with this new Jacoby Ellsbury for my Red Sox collection. 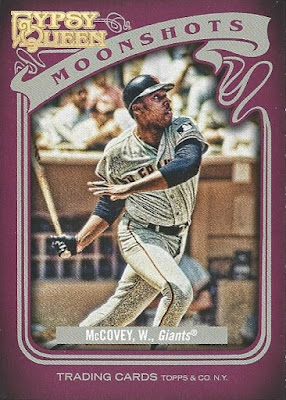 As far as Gypsy Queen goes, I will hang onto this Moonshots McCovey insert.  Far from my favorite card in the break, it's at least a halfway entertaining concept for an insert set, which is more than I can say for many of Topps' efforts over the past few years.

The 2006 Topps rack pack wasn't the only rack pack to be found among the lot that I received.  While I didn't do all that well with the first one, I do appreciate these being included and counted as only a single pack towards the lot total.  If nothing else they off-set some of those sad 5-card Topps packs in terms of overall number of cards in the lot.

I was more excited for this Upper Deck pack than I was for its Topps counterpart that led off the post.  For one thing, I just like the design that Upper Deck used in 2006 better than that of Topps.  I figured there would be a couple of base card keepers for me based on the photographs alone as well.

The other cool thing about this one is that each of the two pockets of cards includes an All-Time Legends insert featuring the absolute greats of the game from years gone by. 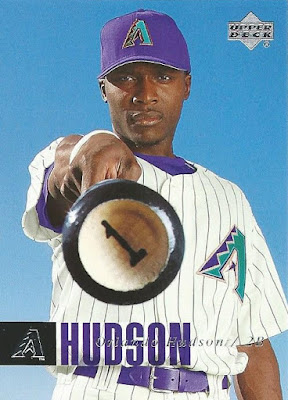 As expected, the photography was great.  I'm keeping this Orlando Hudson even though it does not fit into my collection in any way shape or form, simply because I love this bat-barrel shot. 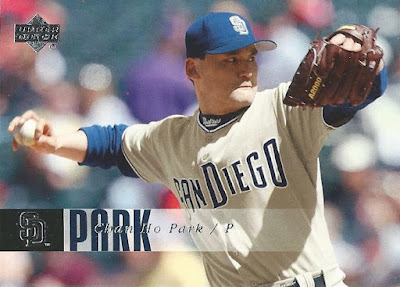 I cracked a smile when I thumbed across this Chan Ho Park in the stack.  Takes me right back to the summer of '94, when I was an impressionable 11-year-old baseball fan and Park was a huge name.  I don't collect the guy or anything, but I'll hang onto his cards as I come across them for that reason, and this is my first one featuring him with the Padres. 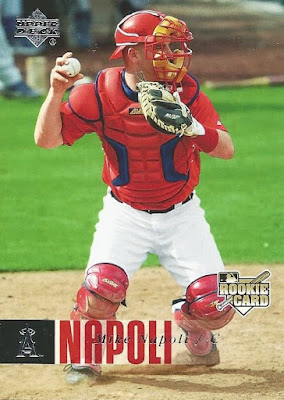 Also thought this Mike Napoli RC was noteworthy enough to hang onto for now, especially since he played on the Red Sox 2013 championship team. 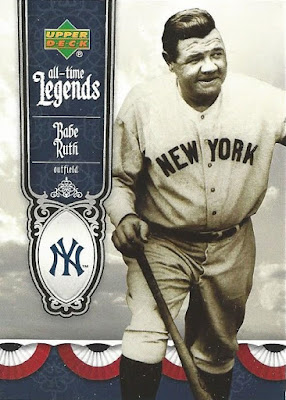 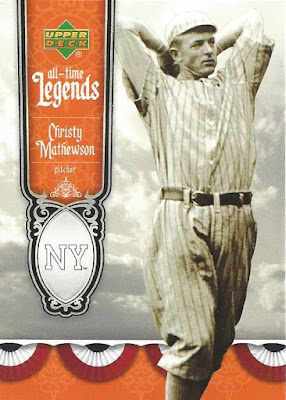 ...and Christy Mathewson.  How'd you like to go back in time and watch these two square off?  I'll take these inserts over Topps' "vintage" throw-ins any day if you ask me.  Upper Deck wins the battle of the rack packs this time around! 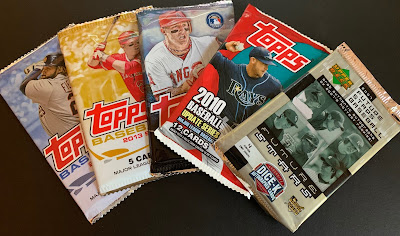 Another batch of five here, lotta Topps flagship and yet another pack of that dreadful UD Future Stars product. 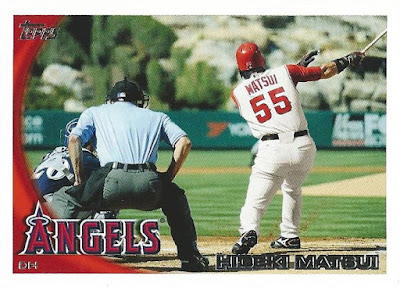 Believe it or not, the only pack out of those five to yield a keeper for me was the 2010 Topps Update pack.  I had either never seen, or more likely forgotten over time, this beautiful Hideki Matsui card.  Tell me that isn't just about baseball card perfection? 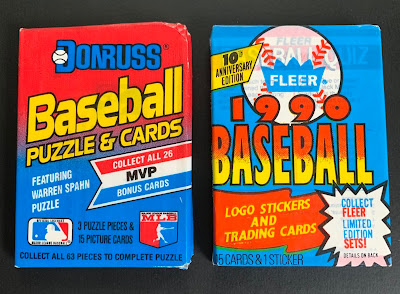 More junk wax.  This 1990 Fleer pack was a complete and absolute dud in every sense of the word.  This was also maybe the least exciting '89 Donruss pack among the entire lot, but it did yield... 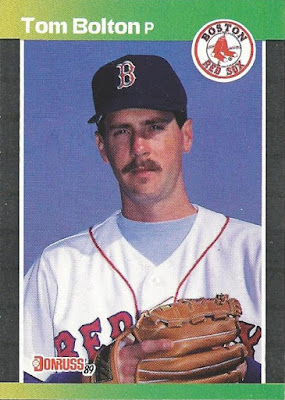 ...another new Red Sox card for me, with this Tom Bolton. 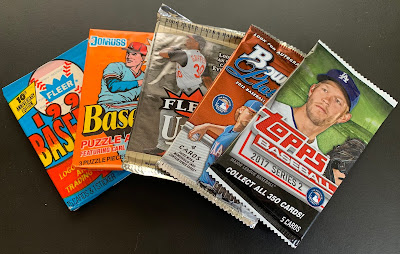 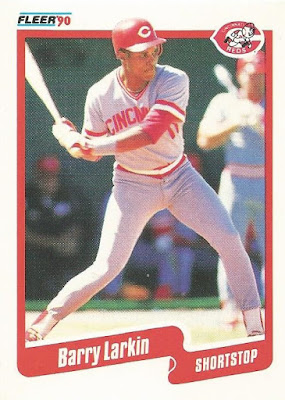 From 1990 Fleer, a nice card of HOFer Barry Larkin.  I love all the red on this one. 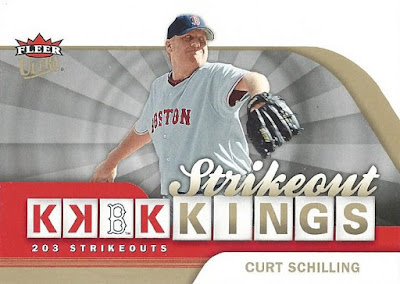 From 2007 Ultra, another new Red Sox card for me.  This one, a Strikeout Kings insert.

So, that takes us to 100 packs, and out of those 100 I ended up with an even 80 new cards for my collection.  I wound up with hundreds of cards that I sent out to join other collections as well (mainly Billy at Cardboard History).  Perhaps most importantly, ripping this many packs satisfied my urge to open new product for a good long time, I think.

Normally, that would wrap up this series of posts, but guess what?  The seller was actually very generous and included quite a few bonus packs for free.  Enough of them to get an entire post out of for sure.  So next time, we will finish up the remainder of this re-pack lot.

Until then, thanks as always for stopping by!
Posted by shoeboxlegends at 10:15 AM

Such a bummer that you didn't pull a decent vintage card out of the Topps rack packs. I picked up a few of those in Target at least a couple years after their release; they were in a discount bin - which itself is something I haven't seen in years. Anyway I think I got a 1990 Topps card (Todd Benzinger maybe) but two others I got were 1977 Rick Rhoden and 1978 Don Stanhouse. Not sure if they were in the same rack pack, but those two pulls would have kept me coming back for more.

I appreciate being on the receiving end! You've certainly added a lot of new names to my collection, many more are still waiting for me, I believe!

That Matsui card really is nicely done. As for 1989 being "vintage"? I don't think so. Heh. Thanks for all the scanning work in these posts!

80 cards for your collection? I think you did pretty well. I probably only found 20 cards out of my first 70 packs. I put the Junk Wax stuff aside for a rainy day... but I might end up busting them today since I read this post. Anyways... I'm so bummed that Walmart has gotten these back in stock. Even though I didn't pull a lot of stuff I could use... it was fun to sit down and bust packs for the price.

Wait, Hideki Matsui played for the Angels? What a great card. Although looks like he might have struck out.