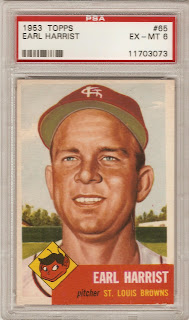 Well, Earl "Irish" Harrist's life appears to have been as bland as his career in Major League Baseball was brief. He appeared in 132 games over his 5 year career for 5 different teams. Earl was an average pitcher for the most part, the only notable stat I can find is that he led the American League in hit batsmen in 1952 with 10.

I only have a couple of observations about this particular card. First, Earl appears either to be constipated, or incredibly confused on the front of the card. He didn't pitch in the majors at all during 1949, 1950, or 1951 so maybe the expression was a result of his realization that despite 36 appearances in 1952, he was clearly on the back 9 of his brief career. The other thing I like about the card is that on the back it says "Earl was used almost entirely in relief roles for the Brownies in '52". I had no idea that the St. Louis Browns were referred to as the "Brownies". For some reason, this makes me snicker. I learned something new today.

If anyone knows what Earl did with himself between his retirement from baseball and his death in 1998 please leave a comment, I'd be interested to hear it...

Posted by shoeboxlegends at 7:05 PM No comments:

Posted by shoeboxlegends at 9:44 AM 2 comments: 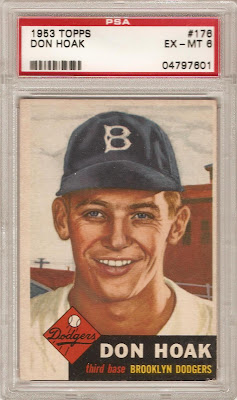 Don Hoak may not have participated in a memorable play during the 1953 season like the subject of my first 1953 Topps post, however I've learned that his life, albeit short, reads like a movie script.

In the early 1950's, Don stepped into a batter's box in Cuba to face a young pitcher by the name of Fidel Castro, and convinced the umpire to have him thrown from the game after a few brushback pitches! I never realized Fidel Castro threw a pitch in his life! I won't summarize everything I've learned aobut Don's life here, in the interest of keeping the post to a reasonable length (check out his wikipedia entry to see why he puts Curt Schilling's bloody sock to shame), but here are some other interesting facts about Don...

He played third base for Brooklyn in place of Jackie Robinson in game 7 of the 1955 World Series, a game the Dodgers won, and the only World Series game that Jackie Robinson missed during his career. He was involved in one of two plays during 1957 that ultimately were the catalyst for a change in the baserunner interference rules. During this same season, his only All-Star appearance was attributed to a controversial ballot-stuffing campaign by Cincinnati Redlegs fans. Don set the National League record for most strikeouts in a game with 6. He also won another World Series title with the Pittsburgh Pirates in 1960, a season in which he finished second in N.L. MVP votes to fellow Pirate Dick Groat.

Perhaps most bizarre of all, Don died at age 41 of a heart attack, while chasing after his brother-in-law's stolen car. At least he was immortalized in a line from Billy Crystal in the film City Slickers...

Posted by shoeboxlegends at 7:58 AM No comments: 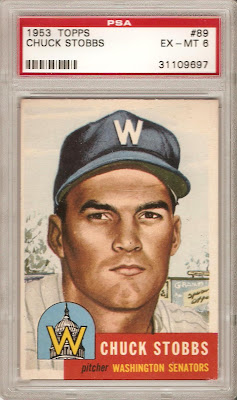 I'm making an effort to focus on vintage cards in my second stint at collecting. You know, the cards that were locked in the glass case just out of reach at the card shop, seemingly unattainable to a kid whose sole source of income was a $5.00 weekly allowance. One lofty goal that I've set for myself this time around is to complete a 1953 Topps baseball set. This seemed like a reasonable place to start for a few reasons. 1953 Topps is my favorite vintage baseball set. It doesn't hurt that the set consists of only 274 cards and is much more reasonably priced than the 1952 set (try finding a high numbered '52 card in decent shape for less than a couple hundred bucks). In any event, this is something that will help give my blog some direction, and I plan on tracking my progress here. Leading off is card #89, Chuck Stobbs of the Washington Senators...

Chuck was drafted by my local team, the Boston Red Sox, and would spend the first 3 full years of his career with the club. He pitched his way to a decent 11-8 record with the Senators in 1953, with a respectable 3.29 ERA. Unfortunately for Chuck, the most notable fact regarding his 1953 campaign was not his win total, ERA, or single stolen base. It was his involvement in the play from which the phrase "tape measure home run" would be born. Chuck was not the one swinging the bat during this particular play. If you don't believe me, check out the big goose egg in the Home Run column of his career batting statistics. In a game against the visiting Yankees, the meatball* that Mr. Stobbs served up to Mickey Mantle was crushed entirely out of Griffith Stadium, a blast that was an estimated 565 feet in length (a steroid-free blast at that!). It was from this dinger that the term "tape measure home run" came to be.

Maybe it will be a few months from now on Sportscenter. Maybe it will be during next summer's home run derby. Whenever it happens, I hope the next time you hear the words "tape measure home run" you take a moment to say to yourself "Thank you. Thank you Chuck Stobbs."

*While I do not have any specific credible sources to verify that the pitch was indeed a "meatball", I reserve the right to apply this word to any pitch that is crushed for a distance of over 500 feet.

Posted by shoeboxlegends at 9:03 PM No comments:

Sports card collecting was a hobby I loved as a kid in the late 80's and early 90's. I still remember piling in the car on a Saturday with my father and two brothers and heading out to the local card shop or flea market to pick up a couple of packs. I recall the feeling of elation when my grubby little 8-year-old hands pried open that ugly green wrapper that protected a few terribly designed 1990 Topps baseball cards to reveal a Nolan Ryan, my favorite player at the time. The world was pretty simple back then.

For one reason or another I eventually packaged all of my cards, put them away in my parents' basement, and moved on to other things like music, college and a career. This past year, at age 24, and with a decent amount of expendable income available for the first time in my life, I've returned to the hobby that provided me so much enjoyment when I was younger. A few other great card blogs I've been reading over the past few months (like Thorzul Will Rule and Cardboard Junkie) have inspired me to start my own.

I am setting no stringent goals or standards for this blog. I hope to display some vintage cards, maybe bust a few packs, hopefully arrange a trade or two, give away some interesting stuff, have a few good laughs, and possibly even learn a thing or two along the way. In general, I will probably be covering mostly vintage cards, baseball and hockey with some occasional basketball as well. Welcome to Shoebox Legends!
Posted by shoeboxlegends at 8:10 PM No comments: