The Pearl Jam show at Fenway Park last night was an unreal experience.  Looking back on it now I can't believe I nearly skipped out on this (I miraculously picked up a pair of tickets right from Fenway/Red Sox website for face value the day before the show).  I can honestly say that they are every bit as energetic, and as entertaining, as they were the first time I saw them more than 15 years ago now.

This was my first time seeing anything other than Red Sox baseball at Fenway Park, and I thought it worked very well as a concert venue.  The stage was set up in dead center field, to the immediate right of the Green Monster as you can see above.  The sound was better than I expected, and the crowd was fantastic.  There were many moments that would raise the hair on just about anyone's arms, just hearing tens of thousands of people all singing in unison outside on a nice summer evening is quite an experience.

We were treated to a solid three hours of music with a setlist that was full of the band's classics, more obscure songs that their dedicated fan base loves hearing, and even covers of songs by Bob Dylan, Aerosmith, Pink Floyd and The Beatles.

On the way out, while heading to meet up with some friends, I had to do a double take after walking by one of the merchandise tables on Lansdowne Street.  I couldn't believe my eyes: 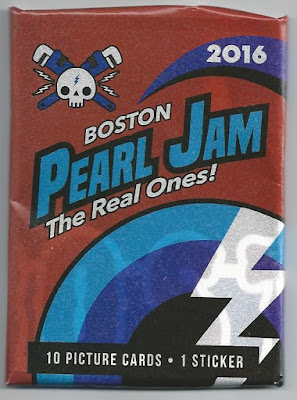 Yes, Pearl Jam has made a set of trading cards to commemorate their shows at Fenway Park!  How genius is that?  I plucked down $5 and walked away with a pack of 10 cards and a sticker insert, and a giant smile on my face.  I regret not buying a few more packs, but I may or may not have been a few beers deep at that point in the night (don't worry I took a taxi). 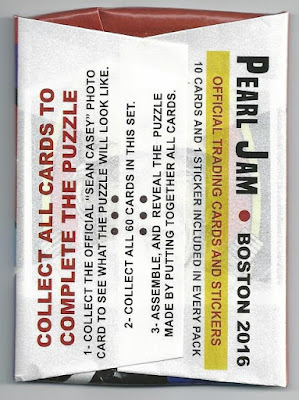 Here's the back of the pack, which had a retro feel that reminded me of '80s Topps wax packs.  You can see here that there are 60 cards in the set, so you'd need 6 packs with perfect collation to complete it.

I had no idea what to expect when I finally sat down this afternoon to tear in... 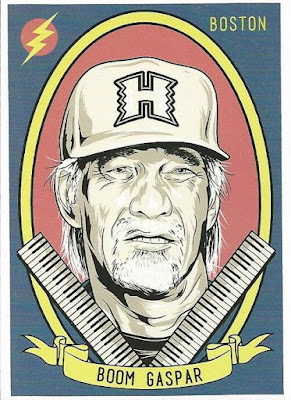 Here's my sticker insert, of keyboardist Boom Gaspar.  These are so well done, kind of remind me of something Panini would put out (or has?).  I love the two keyboards, nice touch.  From what I've seen so far it looks like there might be only three different stickers. 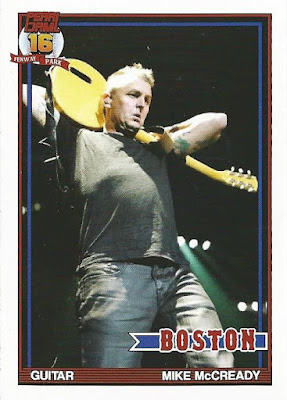 The cards themselves are obviously "inspired" by 1991 Topps, but tailored to reflect the 2016 Fenway Park shows.  It's important to note that these aren't printed by or affiliated with Topps in any way, they appear to be just independently produced by the band.  At this point I'm basically in shock that I just pulled a card of Mike McCready soloing behind his head from a pack. 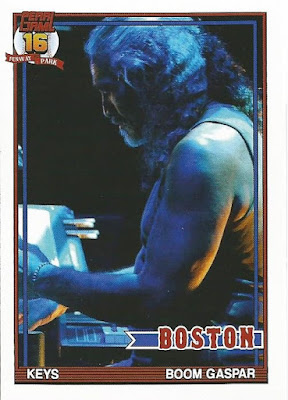 If I had one complaint it would be collation of guys in the band within the pack, because as you'll see I seemed to get a Boom Gaspar hot pack.  I'm not going to complain though, I'm still in shock that two of my favorite things in life, Pearl Jam and trading cards, have combined here. 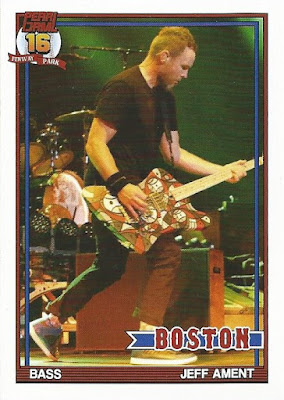 Bassist Jeff Ament is now a part of my card collection as well.  I didn't bother to scan the backs, because they each feature just a small portion of a larger photo that's formed when you put all 60 cards together face down. 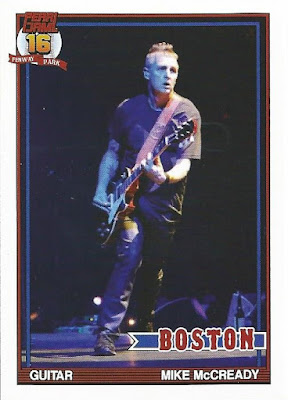 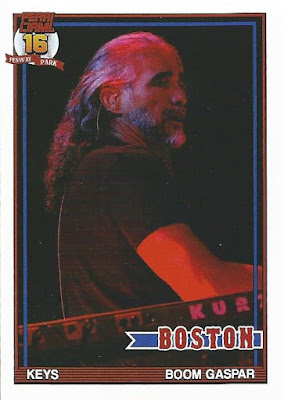 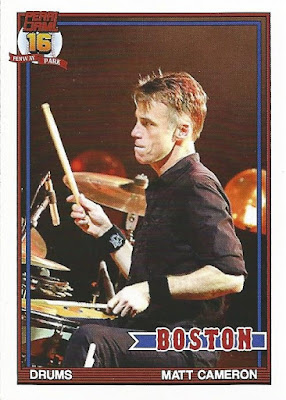 The last of the band members that I pulled was drummer Matt Cameron.  So, if you're a fan of the band then at this point you realize I got skunked on Eddie Vedder or Stone Gossard cards.  Oh well. 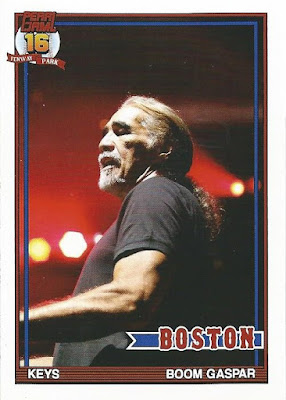 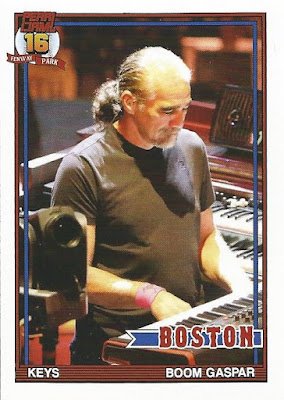 Even more Boom.  See what I mean? 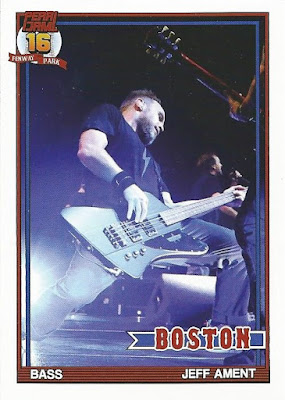 Pretty interesting low-angle shot of Jeff Ament owning the bass, with Eddie singing in the background. 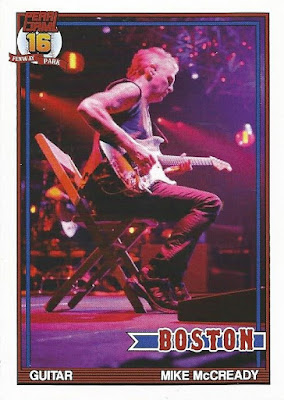 Last card from my pack, McCready doing his thing during a more mellow portion of the set.  We were treated to something like this last night, with the guys doing three or four acoustic songs to kick off the first encore. 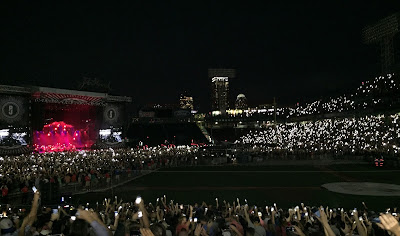 All in all, an incredible evening.  I'd rank this show in the top five that I've been to by any band.  It was a night that provided some great memories, and to have it end with baseball cards was the icing on the cake.


Posted by shoeboxlegends at 9:46 PM

I think that they did this for their Wrigley Field show as well - looks like these made for a perfect cherry on top of an already amazing night!

Sounds like it was a great show! Those cards are incredible as well!

Those cards are great! They almost make me wish -- sorry about this, Shane -- that I liked Pearl Jam. There are a bunch of these cards on eBay, including one of Sean Casey... Who is apparently a big PJ fan and used "Even Flow" as his walkup music for years.

Those are great! What a cool idea.

I want those cards -- either Chicago or Boston or both or all or everything.

I first saw Pearl Jam play live in 1995 in Milwaukee at Summerfest on their "we're trying to make it up to you for canceling shows because of TicketMaster" tour that summer. I own a little over a third of the live shows from their 2000 tour and probably another 20 shows from their 2003 tour, and I've seen them live four times now but not for 13 years.

I think I'm going to have to listen to Ten Club Radio on TuneIn Radio now.

Wow. Just checked eBay for a complete set... and these cards sell for BIG money. Guess I won't be picking up a set anytime soon.

Love this idea. More bands should do this. I would pick these up in a heartbeat if I saw them at the merchandise booth. Great post.

These are awesome! I love when my two favorite interests of baseball and music come together in a cool way.
I've been a Pearl Jam fan since the beginning though have never seen them live, sorry to say. (Have listened to tons of live recordings, though, so almost feels like I have.)
Looks like whoever collated that pack pranked you with all the Boom! lol

That is freaking awesome! I am very jealous and hope to see them some day. Love the cards idea, too bad you were a little loaded up on Boom ones and couldn't see some other band members in cardboard form.

So pleased you had a great day, keep up the great posts!