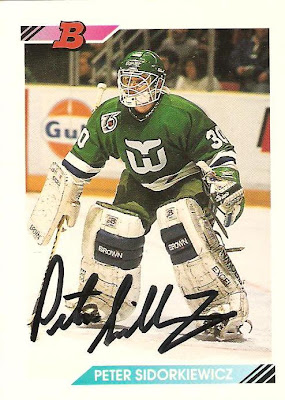 I didn't get a chance to post much this weekend, so rather than go without posting anything I figured it would be a good chance to show off one of my recent Ebay purchases. Why the hell would I want to show off a Peter Sidorkiewicz autographed card? Well, he was one of my favorite Whalers players during his stint in Hartford, although I think I liked him more for his ridiculous last name than for his goaltending ability.

I was psyched when I won this card for a mere $.99. How do I know it's not a fake? Well, I have another hand-signed Sidorkiewicz card where the signature looks identical, and I'm pretty sure there's not enough of a demand for his cards to warrant any forgery attempts...

Posted by shoeboxlegends at 9:25 PM No comments: 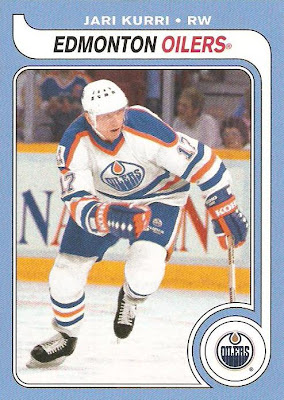 I've been on a huge hockey kick lately. My high-definition DVR is being put to good use, and between NESN (which televises every Bruins game unless they are blacked out by national coverage), VS and the NHL Network I'm able to catch a solid 5-8 games a week. I've got more hockey than I can keep up with without wasting a bunch of money on an expensive cable package.

To continue with the hockey kick, this month's card of the month is the retro variation of Jari Kurri's 2008 O-Pee-Chee hockey card. I already raved about this set when I ripped a rack pack for A Pack a Day a while back, but I just can't get enough of it. After opening that rack pack I learned that the regular packs (both hobby and retail) contained variation cards of the entire 600 card set based on the 1979 O-Pee-Chee design (Wayne Gretzky's rookie year). I've always thought this was one of the best Topps/O-Pee-Chee designs, in fact, one of my favorite hockey cards of all time comes from this set.

I've since picked up a second rack pack, 4 hobby packs and a blaster from Target. I love the regular set, but these retro variation cards are even cooler. I'd love to complete a retro set, but it would be quite an undertaking. For now, I'll just enjoy the retro cards I have pulled, like this Jari Kurri.

I think Jari, a Hall-of-Famer and current manager for team Finland, is one of the most underrated players from the 1980s/90s era NHL. His 1,398 points are good for 18th all time, his 601 goals good for 14th place on the all time list. Keep in mind that he missed an entire season right in his prime, deciding to play overseas. Some people may argue that his point totals are inflated because he had the benefit of being Gretzky's linemate in both Edmonton and Los Angeles for the better part of his career. Fair enough, but what about his 1989-90 campaign, when he registered 93 points in 78 games and led the Oilers to a Stanley Cup Championship sans Gretzky?

What do you think, is Kurri one of the top players from his era or did he simply benefit from playing with the greatest hockey player of all time? 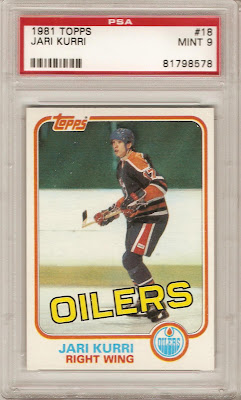 The Bruins are Relevant Again! 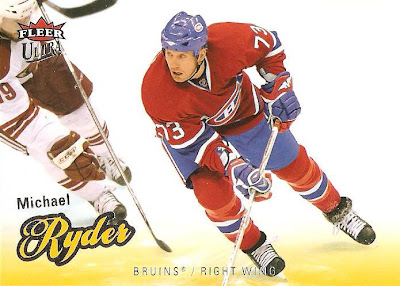 The 2008-2009 NHL season is in full swing, and the Boston Bruins are looking better than they have in quite some time. The B's are 9-0-1 in their last 10 games, and currently have as many points as the perennial powerhouse Detroit Red Wings.

I chose to display this Michael Ryder card for a couple of reasons. In case you couldn't tell from the image, Ryder just came to the Bruins this season from Montreal. He and his teammates just beat the Canadiens on Saturday night (the night that Patrick Roy's jersey was retired at the Bell Centre) to put themselves in the top spot in the Eastern Conference!

Also to be noted is the terrible design of 2008-09 Fleer Ultra hockey. This set doesn't hold a candle to 2008-09 O-Pee-Chee, which is the hockey set of the year so far in this humble blogger's opinion.

After the recent success of the Red Sox, Patriots and Celtics, it's nice to finally see a buzz about hockey in New England. If you live in the area and want to be entertained for a couple of hours do yourself a favor and tune into a game or two on NESN. Hopefully the Bruins can maintain this momentum and make Boston a hockey town once again! 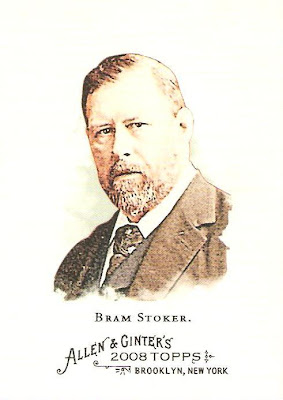 I never bothered to learn much about Bram Stoker, although I have read parts of "Dracula" and really enjoyed Francis Ford Coppola's film from the early 90s. Here are a few things I wasn't aware of:

Anyone out there read the book, and if so how true was Coppola's movie to the original plot?

Posted by shoeboxlegends at 1:27 PM No comments:

A Case for Update Sets 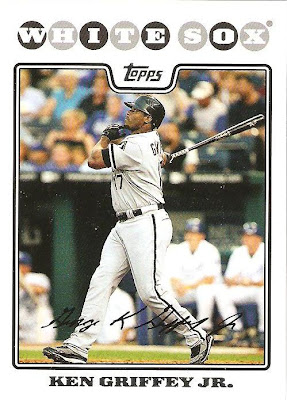 Dayf recently featured a great example of why update sets are a good thing, and I couldn't agree more. First and foremost, they act as the modern day "Traded" set, providing an opportunity to pull cards of players who were dealt mid-season, such as the Griffey card pictured above. I've only opened a few packs so far, and am still anxiously looking for the Manny Ramirez - Los Angeles Dodgers card.

Aside from that, I like how they provide a snapshot of some of the events that occurred over the previous baseball season. This Josh Hamilton card is a perfect example: 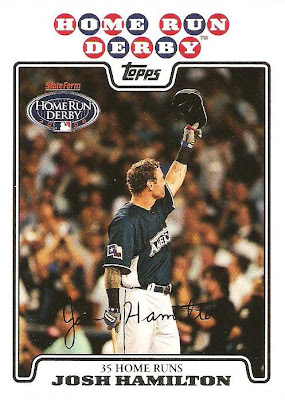 Tell me that isn't a great card! Upper Deck was my favorite 2008 base set, and I was very disappointed to hear that they are not releasing an update set this year. I hope they strongly reconsider in 2009. Topps, please don't follow suit and do away with your Updates & Highlights set next year!
Posted by shoeboxlegends at 10:54 AM 1 comment:

Anyone Want to Trade for a Cole Hamels Jersey Card? 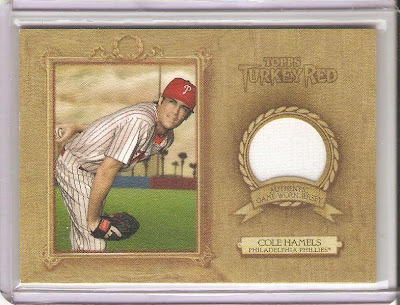 Alright, this is something I've never tried before but we'll see how it works out. I've got this 2007 Topps Turkey Red Authentic Game-Used Jersey card of 2008 World Series MVP Cole Hamels, which I pulled from a pack last year. If anyone's interested, here's what I'm envisioning...

The first person who posts a comment and sends either of the following to me can have the card:

If you'd like to send more 50s or 60s cards maybe we can work out an even larger trade. Anyone interested? 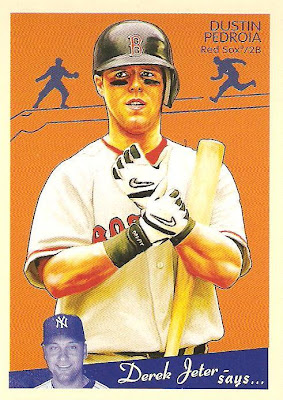 Congratulations to Dustin Pedroia for winning his first Rawlings Gold Glove Award today. Dustin is one of my favorite players to watch, and, in the opinion of this biased Red Sox fan, is well-deserving of the Gold Glove. Not a bad track record so far, two years in the league and he's already racked up Rookie of the Year and Gold Glove honors.

Posted by shoeboxlegends at 7:19 PM No comments: