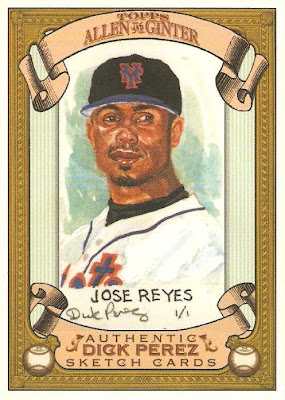 Another choke job of epic proportion for the Mets this year. There's no way to sugar coat it, it's got to feel pretty awful to be a Mets fan right now. An unfortunate way to say goodbye to Shea Stadium.

On the other hand, you've got to hand it to Milwaukee. How clutch has Ryan Braun been this week? It's hard for me to believe that the last time the Brewers made the playoffs I was only a couple of months old. I'll certainly be rooting for them in the NL, but does Sabathia have enough left in the tank? It's going to be a very interesting post-season... 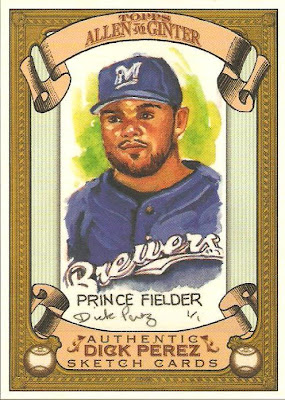 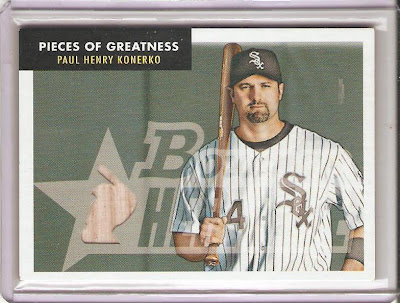 The 1960 Topps Bill Mazeroski that I was surprised to find in my mailbox recently has gotten me thinking about finding a home for some cards that others would probably appreciate more than I do.


To start things off, here's a Paul Konerko bat card that I pulled out of one of the two hobby boxes of 2007 Bowman Heritage that I bought last year. I'm not a White Sox fan at all, and they're in the process of choking away their playoff hopes at the hands of the Cleveland Indians as I type this post.
Be the first to leave a comment and the card is yours. Just make sure you include an address I can send it to, or your email address so that I can contact you.
Posted by shoeboxlegends at 9:20 PM 1 comment: 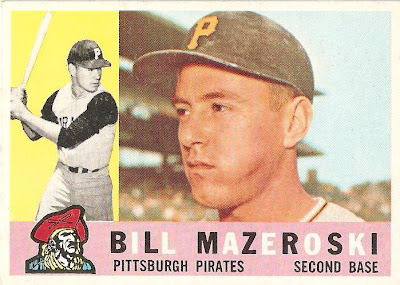 I've chosen this card as September's card of the month for a few reasons. First of all, 1960 Topps is my favorite set from the decade. What's not to love about this set? Horizontal cards, color and black and white photos of the player, multi-colored block lettering for the player name...this is one great set.

Secondly, with the post season fast approaching, what better time to commemorate the greatest World Series home run ever hit? Anyone who calls themself a baseball fan already knows of Mazeroski's walk-off home run in game 7 of the 1960 World Series. This is the only walk-off home run to decide a World Series game 7 to date (Joe Carter won the 1993 World Series for the Toronto Blue Jays with his game 6 walk-off), and best of all it prevented the New York Yankees from capturing yet another championship. What you may not know (I will admit that I didn't until writing this post) is that the 13-year-old who caught the ball allegedly traded it to Mazeroski for two cases of beer after the game. It now sits in Cooperstown.

Finally, and most importantly, this card symbolizes what I have come to love about the recent explosion of baseball card blogs over the last couple of years. Most of the blog owners and readers are incredibly generous, and it's resulted in a really great community for trading (and sometimes just giving). A while ago, a gentleman named Rob contacted me about a potential trade. A short while later, a package arrived in my mailbox containing a few 2007 Goudey base cards that I needed, the rest of the cards that I needed to complete my 1991-92 OPC Premier hockey set, and to my surprise, this Bill Mazeroski card! For someone who loves vintage cards it doesn't get much better than this, thank you Rob! Just an FYI, your package did not make it out until today (I can't conveniently send to Canada from work and it's been tough getting to the post office). This gift has inspired me to give away some cards myself, keep an eye out in the near future! 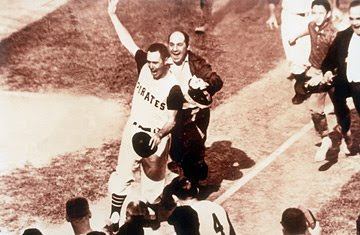 Posted by shoeboxlegends at 10:29 AM 2 comments: 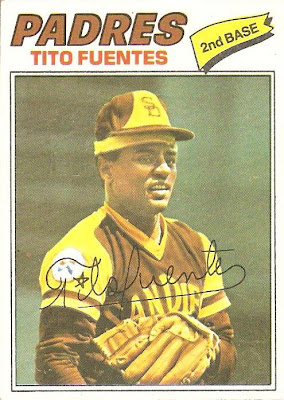 1977 Topps #63 - Tito Fuentes
Sorry Tito, but the sweatband/hat combo is not working for you. Try to say "Tito Fuentes does not look like Sloth from the Goonies" with a straight face. You can't do it, can you?
Posted by shoeboxlegends at 7:00 PM No comments: 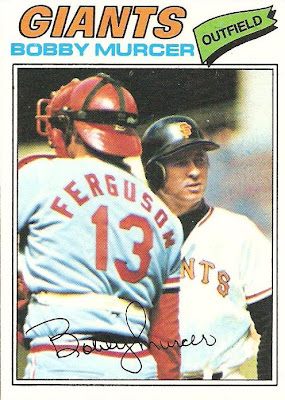 Bobby Murcer looks pretty pissed off. Wouldn't you be if Joe Ferguson was encroaching on your card like this?
Posted by shoeboxlegends at 7:00 PM No comments: 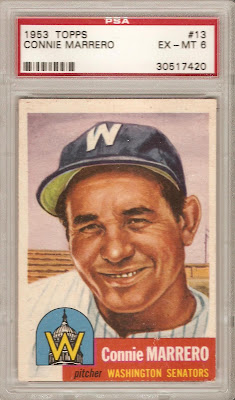 Conrado Eugenio (Ramos) Marrero, affectionately known as Connie, played for only 5 seasons in Major League Baseball. It wasn't that he was a poor pitcher, it's just that he was pretty damn old by the time he started his MLB career. Marrero wouldn't throw his first pitch for the Washington Senators until age 38.

Connie enjoyed a long career as a Cuban baseball player prior to coming to the bigs. He wasn't exactly blessed with a natural pitcher's physique, but despite his stature he was incredibly successful in Cuba. Marrero was not exactly a power pitcher either, and relied heavily on slower pitches like curveballs and even knuckleballs. In his 1947-48 Cuban League campaign, he set league records for shutouts in a season (8) and E.R.A. (1.12), and was awarded league MVP honors.

Even though Connie's better days were behind him by the time he began to play ball in the US, he managed a pretty decent 5 seasons with the Senators. He was elected to the American League All-Star team in 1951, and in 1952 he pitched his way to an 11-8 record with a 2.88 E.R.A.

Posted by shoeboxlegends at 7:54 PM No comments: 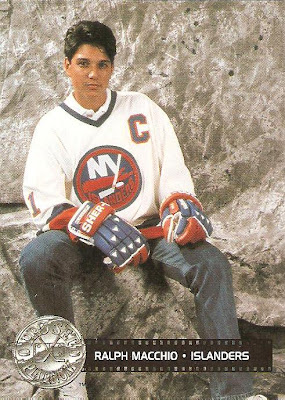 No, your eyes are not deceiving you, this is actually a hockey card of Ralph Macchio. The 1991 Pro Set Platinum hockey set contains a series of "celebrity captain" cards, and Ralph was selected as the New York Islanders' representative. He did grow up in New York, but somehow I doubt he had a lot of time to watch Islanders games in the 1980s between the Karate Kid movies and the photo shoots for practically every teen pop magazine in existence.

With the way the Oilers put an end to the Islanders dynasty during the 80s, maybe Ralph used Wayne Gretzky or Mark Messier as motivation to chop through those blocks of ice in Karate Kid. This is truly a ridiculous card... 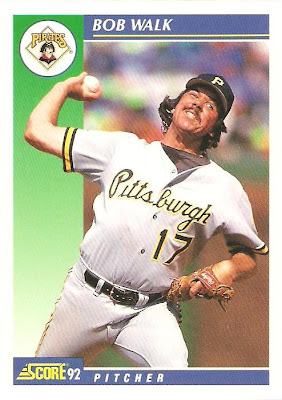 1992 Score #54 - Bob Walk
Can you think of another card where the player depicted looks as much like the team logo as this one? I swear there's probably a peg-leg cropped out of the photo just below Bob's left knee...
Posted by shoeboxlegends at 11:36 AM 1 comment: 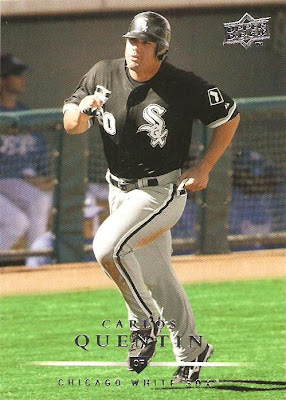 The White Sox have a pretty deep outfield, but nonetheless I'm hoping for the best for Carlos. You hate to see anyone get hurt when they're enjoying a career year like Carlos was... 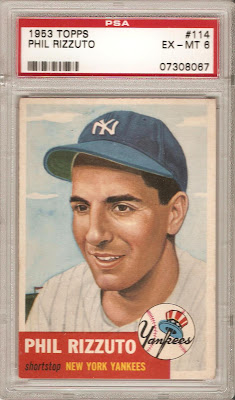 Thanks to my job, I've had pretty much zero free time in the past couple of weeks to even think about cards, forget posting. Then again, without the job purchasing cards becomes a bit difficult. What a conundrum. Anyway, in an attempt to get September off on the right foot, here's one of my favorite cards from the 1953 Topps set, Phil Rizzuto.

Rizzuto is one of those iconic players of yesteryear who instantly comes to mind when you think of the New York Yankees. Phil was known as an outstanding fielder, baserunner and contact hitter. He won the A.L. MVP in 1950, a season in which he batted .324. Aside from being a skilled player, Rizzuto had the fortune of being a Yankee during perhaps their most dominant stretch ever. In his 13 seasons of big league play he won 10 A.L. titles, played in 9 World Series and won 7 of them. He was also elected an All-Star 5 times.

Admirably, like many players from his generation, Phil was away from baseball for three seasons in the Navy during World War II. After his playing days were over he entered the broadcasting field, where he remained for over 40 years, doing both radio and television for the Yankees. Phil was elected to the baseball Hall of Fame in 1994. He passed away last year at age 89.

Posted by shoeboxlegends at 12:03 PM No comments: