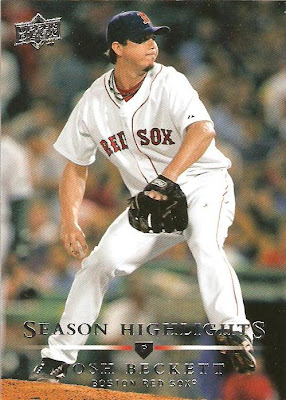 It's been pretty apparent that something is wrong. I'm not sure if I'm as "optimistic" as the Sox are right now...

Posted by shoeboxlegends at 2:55 PM No comments: 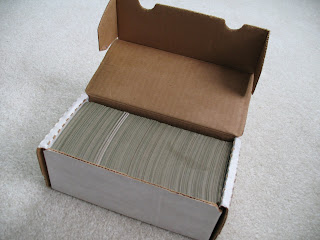 It's been over a month since I stumbled upon some of my old cards, and so far I've resisted my urge to rip everything in the recently discovered bin open and sort it all. Yesterday, for the first time since I found the cards, I found myself with enough free time to explore a little more, so I plucked out this 400 count box. When I opened it up I found the entire box to be filled with 1982 Topps cards! I've always wanted to collect this set, maybe in part because it's from the year I was born so the cards are about as old as I am. Here are a few of my favorites from the box: 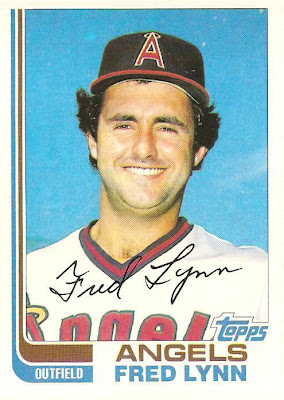 1975 was an amazing season for Fred Lynn. He became the first player ever to capture Rookie of the Year and MVP honors in the same season. 7 years later he was beginning to cool down. Fred came tantalizingly close to the .300 mark in 1982, hitting .299. It's too bad he didn't make it, because he'd never bat .300 again in his career. 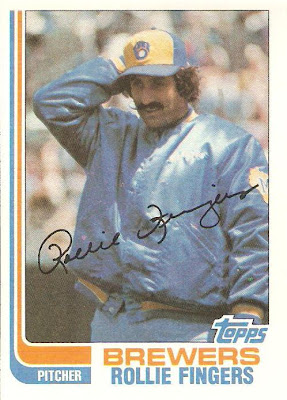 Two things I really like about this card, the mustache and the awesome Brewers hat. 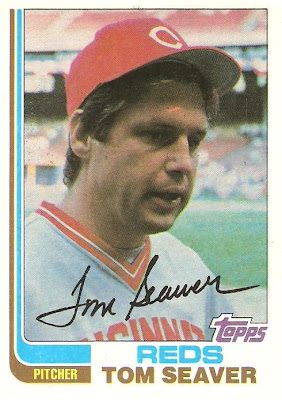 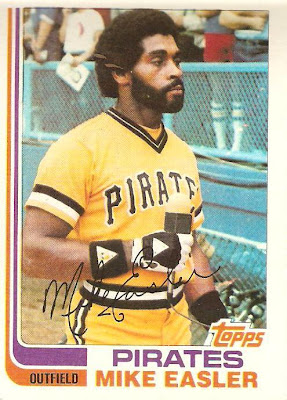 Check out the microphone, very high tech. See those marks in Mike's hair right above his ear? You might think those are scuffs on the card, but strangely I found two of these in the box and each one had those exact same marks. 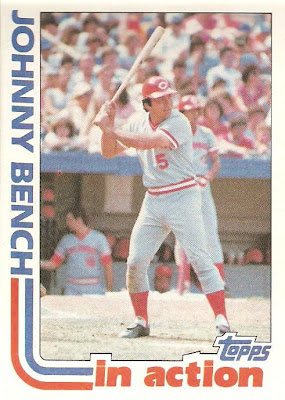 I always liked the old school in action cards. 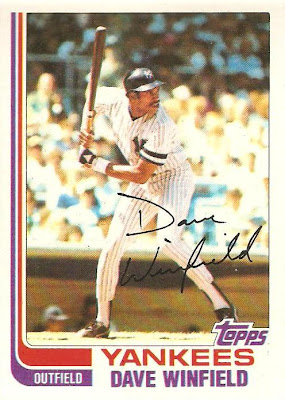 Yeah, he's a Yankee, but this card is a classic in my opinion. 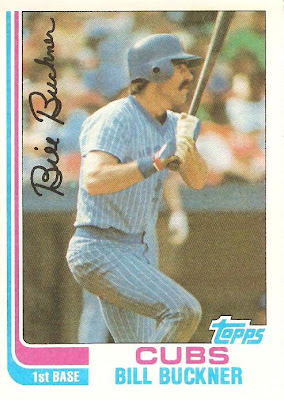 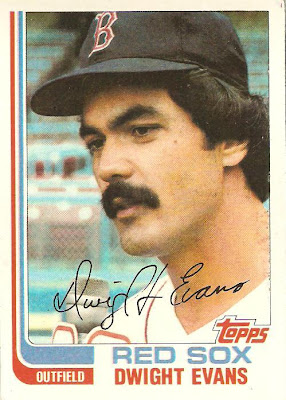 After this find I've decided I'm going to try to build the set. I've got a binder and sheets ready, and will be updating my Available for Trade and Want Lists shortly.
Posted by shoeboxlegends at 7:45 PM 1 comment:

I went to check the mail this afternoon and was greeted by three different packages. Bubble mailers sitting in our box addressed to me mean only one thing, new cards! The first package contained four cards I recently won on eBay. I realized that more than a year and a half after getting back into collecting I had yet to acquire any 1952 Topps cards. I really love this set (how can you not?), so I picked up these four.

The Ken Raffensberger card is the best of the bunch in my opinion. I'm a sucker for horizontal cards, and I also love the background scenery in a lot of the 50s and 60s cards. This card is a prime example of why.

The second package was one I'd arranged outside of eBay. I won a handful of 1955 Topps cards on eBay a couple of weeks ago. On a whim, I emailed the seller to see if he had any others that he hadn't listed. He turned out to be a really nice guy and we worked out a deal where I bought 22 1955 Topps cards off of him for $2 each. Here's a few of them...

The final package was from Dave at Cardboard Junkie, his part of a trade we'd recently arranged. Dave most definitely did not disappoint! Upon opening the package I was greeted by four packs of early 90s hockey cards, 2 packs of 1990 Pro-Set and 2 packs of 1991 Pro-Set. I'll be ripping at least one of these on A Pack a Day in the near future.

Aside from the packs there was a very nice brick of cards. Dave included a bunch of 2007 Topps Heritage cards that I needed. I now need less than 10 cards for the base set. Short prints are another issue, but I'd really like to finish this one some day...

Dave included a bunch of 1990 Pro-Set hockey cards off of my Want List as well. On top of that I got four of the remaining 2007 Upper Deck Masterpieces cards that I needed, including this fine Ken Griffey, Jr. card. I need less than 10 cards to complete this set now as well. 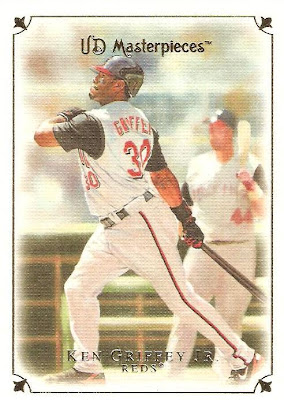 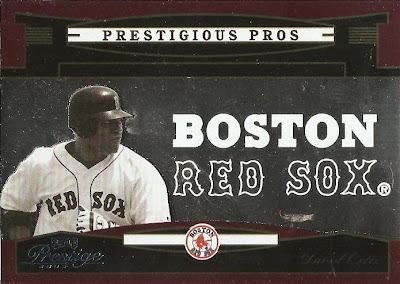 Posted by shoeboxlegends at 11:30 PM No comments: 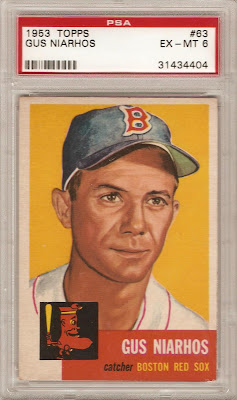 
What can you really say about Gus Niarhos? I had no idea who he was before buying this card and writing up this post, and I'm guessing that you probably don't either. One of the things I like the most about the 1953 Topps set is the backgrounds, but Gus' is about as boring as they come. No clouds, no old time ballpark or outfield fence, no texture, just a plain yellow background.
Apparently Topps used the most bland backgrounds for the most bland players. Gus Niarhos was a backup catcher over 9 seasons in the majors. Niarhos came to the majors as a catcher with the Yankees, which was apparently a tough spot to be in. I guess they had some other guy named Yogi who was pretty decent. He played in 83 games in 1948 and 66 in 1951, but other than that he never eclipsed 45 games in a season. He had a decent batting average in 1950, but was only a .252 career hitter. He never reached 20 RBI in a season and only went yard once in his entire career. Gus went on to become a coach for the Kansas City A's organization, and passed away in 2004 at the age of 84.
On a side note, this is my 27th 1953 Topps Project post, which means I've covered about 10% of the set so far. I'm really enjoying learning about all of these forgotten players from yesteryear. It's been a while since I've showcased a star of any measure though, but I've got a pretty nice card up next for post 28. Stay tuned...
Posted by shoeboxlegends at 12:45 PM No comments: 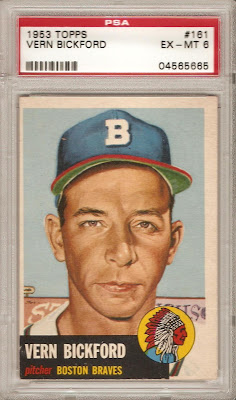 Vern Bickford's tale is a fairly depressing one. He pitched a total of seven years in the majors, and ended with a career record just over .500 and a decent 3.71 ERA. In Bickford's second season, he racked up 16 wins and was elected an All-Star. He seemed destined for greatness when he had an even better third season in 1950. Vern would record a career high 19 wins and compliment that with a 3.47 ERA that year.

On August 11th, 1950 Bickford enjoyed the high point of his career when he hurled a no-hitter against the Brooklyn Dodgers. 1951 was the beginning of the end for Vern. Injuries became a problem for him and he was never able to regain the form he displayed during 1950. 1954 was the end of the road for Vern. He would hold down various odd jobs after leaving baseball, but sadly would pass away from cancer at age 39, less than 10 years after throwing his no-hitter. 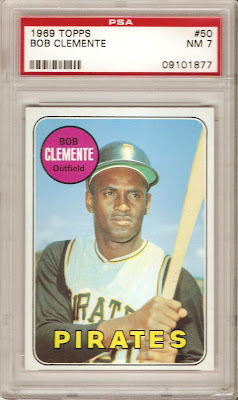 A couple of large projects at work and a death in the family have occupied the better part of my time over the last week or two. My posting has suffered recently as a result, but I should be back on track this weekend.

In the meantime, here's one of my favorite 60s baseball cards. This is just a classic shot of a classic player. It will also spare you from having to stare at George Brunet any longer...
Posted by shoeboxlegends at 10:43 PM No comments: 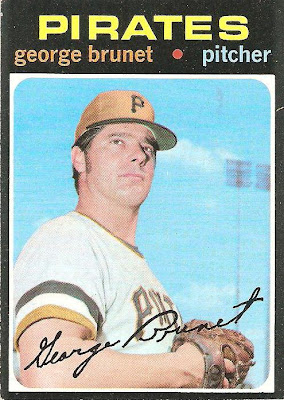 I chose this George Brunet card as the card of the month for August in part because it's the first 1971 Topps card in my collection. But, more importantly, it helped re-affirm in my mind the fact that there's still a place for hobby shops in modern collecting.

I recently bought my first house in Rhode Island, and around here the card shops are few and far between. The couple of shops that I've found in the area have a very limited selection and the cards are generally overpriced. The end result of all of this is that probably more than 75% of the cards I've purchased in the last year and a half have come from eBay or online card stores. There's something to be said for the local card shop though. Making small talk with the owner, thumbing through the cards, watching a couple of kids come in for bubble gum and pokemon cards; all of these things are associated in my mind with a trip to the shop, and give me a sort of nostalgic feeling that you just don't get shopping for cards online.

The fact that Rhode Island still celebrates Victory Over Japan Day (can you believe that?) means I had the day off and $50 in my pocket which I intended to blow on small pieces of cardboard. I took off for the only really large card store around, remembering that the owner had bragged about his selection of vintage singles the only time I'd visited previously. I was in search of 1955 Topps cards specifically, but found that the owner was asking anywhere from $20 to $30 for commons in the same condition as others I'd paid just a couple of dollars for online recently. The guy was a jerk on top of it, and seemed aggravated that I'd made him drag out his binder only to pass on the cards when I heard the ridiculous asking price. I left 5 minutes later with some toploaders, a shoebox and a 1978 Topps Thurman Munson, $5 less in my pockets, and a general feeling of dejection. As my drive home continued, I got more and more frustrated, to the point where I was cursing the hobby shop and questioning its validity in the internet age.

My hobby shop void still unfullfilled, I stopped on my way home at the only other shop I knew would be open, a total hole in the wall about 10 minutes from my house owned by a scraggly, middle-aged guy with an extremely limited variety of packs. I was looking for something to rip for A Pack a Day, but what I found was a glass case in the back corner of this guy's store that looked like it had about a half inch of dust on it. Inside were tons of stacks of vintage cards in toploaders, a huge variety of stars and commons in every different condition. The owner was the exact opposite of the jerk from the first store, he wasn't bothered in the least to spend time opening the case and passing me different stacks of cards to look through. If it were up to him, I think he would've talked to me about baseball and cards for hours. I would've gladly paid his reasonable asking price for the cards I picked out, but without me asking he dropped the price on every single one.

This George Brunet cost me a measly $.50. I spent almost my entire remaining $45 and left there with a huge stack of vintage commons ranging from 1962 - 1977. I also left with a smile on my face. I think I've finally found a local card shop I plan on supporting for a long time...

Posted by shoeboxlegends at 8:38 PM No comments: 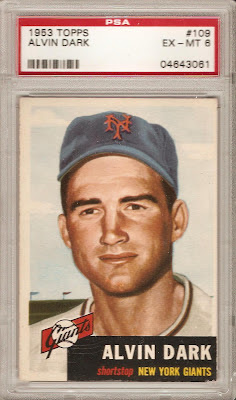 #109 - Alvin Dark - New York Giants
Alvin Dark captured Rookie of the Year honors in 1948 with the Boston Braves. His .322 batting average during that rookie campaign was the highest he would bat in any one season of his career. Although he never hit for quite so high an average again, he definitely put together a few good seasons before calling it quits in 1960.

In 1954 Alvin had a hit in every game of the World Series (batting .412), helping his team to a World Series win over the Cleveland Indians. He was the first ever recipient of the Lou Gehrig Memorial Award in 1955. Alvin went on to have a lot of success as a big league manager after he had played his last game. He would manage for the Giants, Athletics, Indians and Padres.

Posted by shoeboxlegends at 5:23 PM No comments: