Time for the next installment of The 400-Goal Club, where we look at some potentially lesser-known (at least to the casual fan) scorers who hung up their skates after topping 400 career NHL goals, but prior to reaching the esteemed 500-goal plateau... 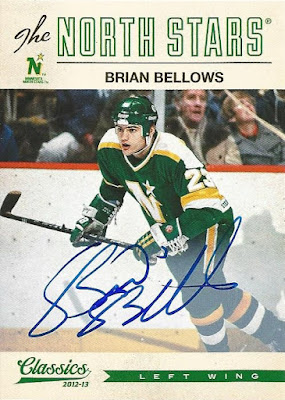 Here's a name that's very familiar to fans of the game during the 1980s, Brian Bellows!  Brian was the second overall pick in the 1982 NHL Entry Draft, and made an immediate impact for the Minnesota North Stars.  He scored an impressive 35 goals as a rookie in 1982-83, at just 18 years of age, and never looked back during his tenure with Minnesota.  After an amazing run through the 1980s with the North Stars, Brian was sitting on 342 goals after completing his age 27 season, and looked like a lock for both 500 career goals and the HOF.

After a trade to the Canadiens, he won the Stanley Cup in his first season in Montreal.  In the following seasons though he'd miss significant numbers of games, and was out of the NHL entirely after his age 34 season.  He finished just 15 goals shy of 500, and since that one Stanley Cup is the sum total of all the hardware he accumulated during his career, you rarely if ever hear him mentioned in conversations about who should be enshrined.  Certainly a member of the Hall of Very Good, though!

Again, I chose this 2012-13 Panini Classics Signatures auto for the post, because these cards are just plain awesome. 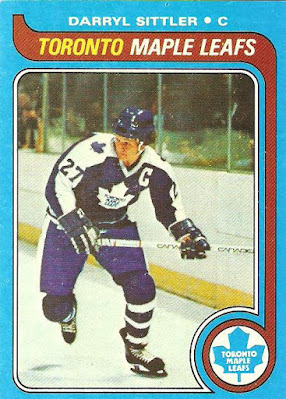 Finishing with one career goal less than Brian Bellows is longtime Toronto Maple Leaf Darryl Sittler.  He was a consistent 30 or 40+ goal scorer into his early 30s, but as with Brian Bellows time was not on his side.  Like Bellows, his final NHL campaign was his age 34 season.

Even though Bellows won a Stanley Cup and Sittler did not, Sittler is the one enshrined in the HOF.  His peak years he was a more dominant player than Bellows.  He had two 100-point seasons and another five 90-point seasons, whereas Bellows never achieved triple digits in points in his career.

Great card here from the release that I personally think is the best hockey set ever created. 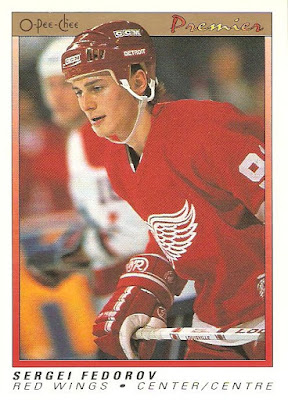 Probably my favorite player who will be featured in this entire series, Fedorov was an absolute beast during the height of my childhood hockey fandom.  I spent many hours with my street hockey net, stick and ball in the yard on the side of our house emulating Sergei as a kid!  His 1993-94 season alone cemented him as one of the best ever, as he scored 56 goals, 120 points, and won the Hart, Pearson and Selke trophies!

Sergei added another Selke Trophy and three Stanley Cups (all with Detroit) to his resume in the seasons to follow, but finished 17 goals short of the 500 mark when all was said and done.  Fedorov played until his age 39 season, but saw his goal-scoring totals decline rapidly in the few seasons that he hung on after the lockout.  As with the first two guys in today's post, he had done most of his goal-scoring damage by his early 30s.  This post isn't a good omen as far as Ovechkin's chances of toppling Gretzky's goal record I guess (though he did have one earlier today!).

So, there are your next three members of The 400-Goal Club.  I'll be back soon with more of these posts, and the names will get more obscure as we move down the list.  In the meantime thanks for visiting my little corner of the internet, stay safe, and happy collecting!

Fedorov's the one I remember from this group.

Don't know if you saw it but Patrick Kane joined the 400 goal club tonight. Don't know if he will hit 500 but it doesn't look like he's nearing the end of his career to me.

My buddy was a huge Red Wings fan and Fedorov was his favorite player. He'd always rub it in how much they were better than the Sharks, so I wasn't really a big fan of the guy. But he was one heck of a player.

Bellows had 1022 career points, not 722. The lower total only counts his time in Minnesota.

Fedorov was one of my favorites when I was a hockey-playing youngster, too. Phenomenal offensively and defensively. Very smart player.

Interesting side note: Brian Bellows has a son named Kieffer who is a top prospect for the New York Islanders.

Thanks for the clarification Anonymous, I was tired when composing this yesterday. Have cleaned it up accordingly!