Alright, this has dragged on entirely too long, time to put this countdown to bed! The item at #1 is definitely one of my more unique purchases from 2011, but it's not really a card... 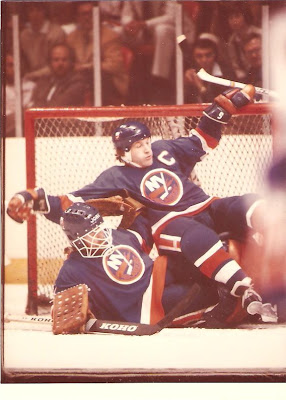 Every so often I visit the Topps Vault eBay store, where the company auctions off some pretty interesting items. I've seen everything from 1/1 cards, to slides, to negatives, to original artwork from '80s non-sport sets. In fact, they have some 1984-85 Topps hockey proof cards listed at the moment, including a Gretzky (which is already at over $100 with more than a day to go). Well, this past fall I just happened to check the site and noticed some items that really caught my eye. Listed for auction were maybe a dozen or so "original match print" photos that were used to create the 1981-82 Topps hockey set.

I could go on about 1981-82 Topps hockey, but I'll save that for another post. Let's just say that as a kid my oldest hockey cards were from this set, and as a result I've always placed it up there amongst my favorite hockey sets of all time. There are a few cards in particular that really stand out, including Bill Barber's base card and the Denis Potvin Super Action card. It was my first Super Action card, and I thought I had struck cardboard gold when I pulled it from a pack. I stored it in a top-loader even though I knew next to nothing about Denis. To be able to score the photo that was used by Topps to create the card I adored all those years ago was pretty cool. I was happy to pay about the price of a blaster shipped.

Here's the photo next to the card that it was used to create: 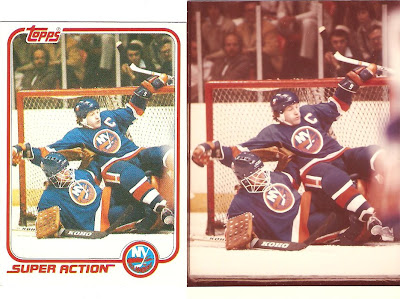 As you can see, the match print photo was scaled (and cropped) down a bit to make the card. The raw photograph is a much better quality than it is on the card, although it appears slightly darker, at least compared to my '81-82 Topps Potvin. What a great shot though. Nowadays half the photos in Upper Deck's flagship set are as interesting as this one, but at the time this was a refreshing change of pace from the tightly-cropped "single player casually skating around" shot that dominated most hockey sets of the era. Adding to the appeal of the card is the fact that it came out right smack in the middle of the Islanders' dynasty. The back of the card has a serial-numbered hologram that matches it to the certificate of authenticity, as well as some handwriting from a Topps employee: 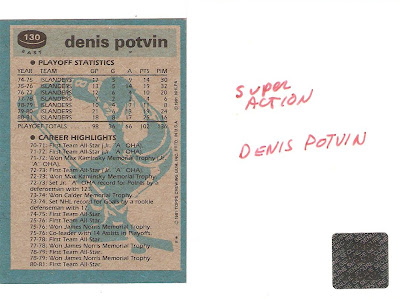 The auction also included the envelope that was used to store the photo. It's really just one of those business envelopes with the clear plastic window that allows the address to show through, but cut in half. It has been labeled by the same person who wrote on the back of the photo. I just picture this having sat in a filing cabinet in the basement somewhere at Topps headquarters all these years. 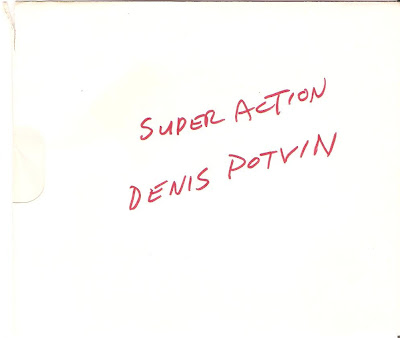 Finally, as with every Topps Vault auction, you get an official Vault envelope... 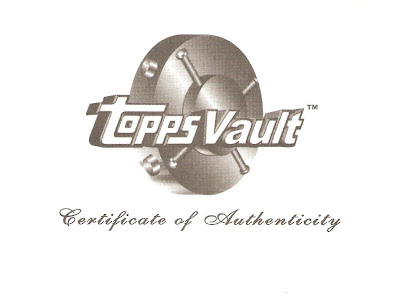 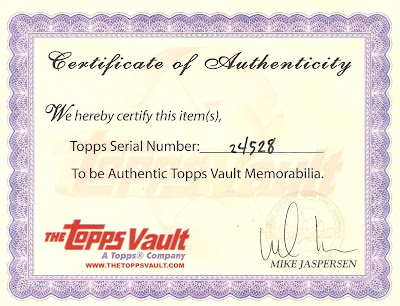 So there you have it. $20 for a unique piece of behind the scenes Topps history...

I have to say I'm relieved to see this countdown come to an end. It was fun to give some of these items that got overlooked during the year a chance to see the light of day, but if I do anything like this again I'll make it far less restrictive than a formal countdown.

In any event, I hope you enjoyed it!
Posted by shoeboxlegends at 7:38 PM

I was looking at the Topps Vault a few months ago. Problem is that they only ship to the US.
If I did buy one, I'd want a card like the one you got. The picture makes that card so memorable.

That is really, really cool. I knew I recognized the picture, but I wouldn't have placed it.