A Football Card Experiment - Game 12 - The Texans Bore Me

For the second straight week the 10-1 Patriots face a team from Texas, as they square off against the 7-4 Houston Texans in the prime time game later tonight.  Since my interest in football cards is for the most part rooted in vintage, and the Texans are the youngest franchise in the NFL, I couldn't really manage to find a Texans card that I liked.  No big surprise there.

Instead, I went completely off-script this week with this old-school Chicago Bears card... 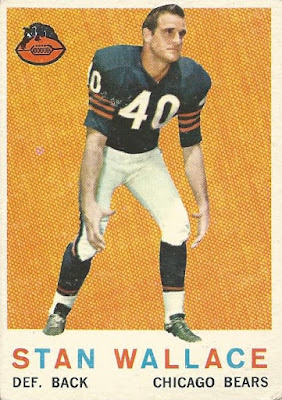 I picked this card up because I enjoy the design.  It's my first 1959 Topps football card, and I have to say that I like what they did with their final football set of the decade.  There's sort of a burlap effect with the way the plain color background is printed.  I think it would be interesting to see what Topps' 1958 baseball set would have looked like with a textured background like this.

Given my limited knowledge of the game of football it should come as no surprise that I'm in no way familiar with Stan Wallace.  A cool looking card nonetheless though, and I really like that logo of the bear on top of the football in the upper left. 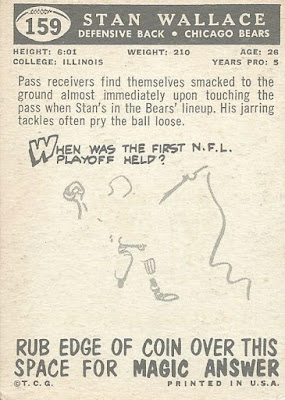 Relatively plain card back, though I have to say the layout is easy on the eyes.  The write-up is short but descriptive in a great way.

I'll be back next week to continue this series.  In the meantime, thanks as always for stopping by, and enjoy the NFL football action today!
Posted by shoeboxlegends at 12:45 PM

I'm actually the opposite when it comes to football cards. I have a few pre-1980 Packers singles, but other than that all my football cards are modern. There might be a J.J. Watt throwback single somewhere, but this Wallace works well as a substitute!

I like the 59T football card design. I've been eyeing the Bart Starr from that set for a few years now. I probably should just pull the trigger and buy it already.