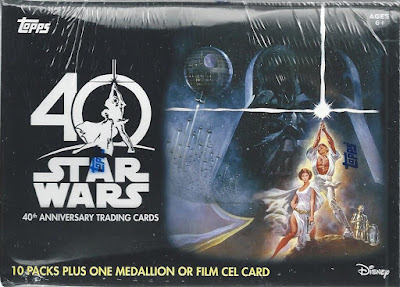 With the final of the nine films in the original Star Wars saga dropping later this month, it seems like an opportune time to feature this blaster that had been collecting dust in my card closet for a couple of years now.

This was a really fun set that Topps released back in 2017 to commemorate the 40th anniversary of the Star Wars franchise.  I wish I'd actually grabbed another blaster or two of this back in the day, as it's an entertaining set, and the cards aren't available very cheaply on the secondary market these days. 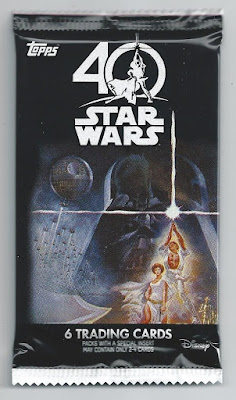 The blaster contains 10 packs, with 6 cards per pack.  Add in the one-per-blaster manufactured medallion card and you're walking away with 61 total cards for $19.99.

I'm not going to show every single card from the blaster, but instead just scanned some of the more interesting highlights as I went.  Let's get to it! 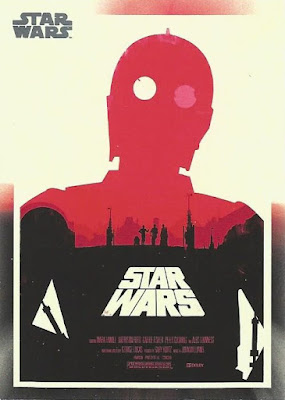 What I like most about this particular set is the sheer variety found within the checklist.  Unlike other Star Wars sets that simply follow the plot of one or more of the films, or simply have a card for each character from the franchise, this release is all over the map.  One of my favorite subsets features posters from the various movies over the years. 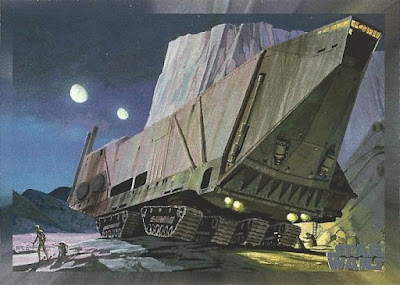 There's some great custom artwork on the checklist as well. 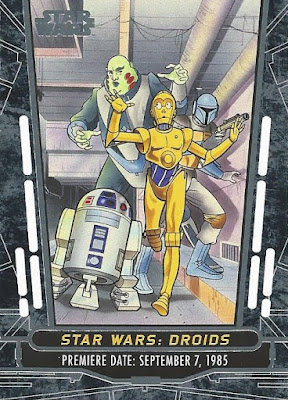 Another thing I love about this set is that it's an education in the world of Star Wars when you thumb through each pack.  For example, despite being a child of the '80s/early '90s I'd never heard of this "Star Wars:  Droids" cartoon show before.  Somewhat surprising given that it was released just after my third birthday, but then again in the '80s it wasn't easy to find television shows like it is these days in the world of streaming. 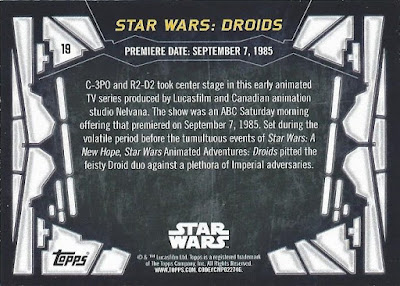 The back of each card does a good job giving you a run-down of the content. 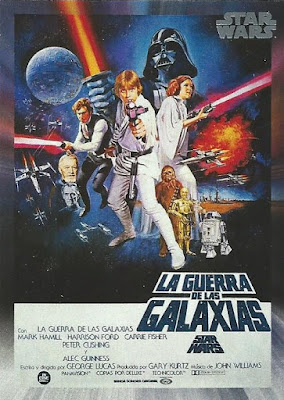 Here's another cool promotional poster, in Spanish this time! 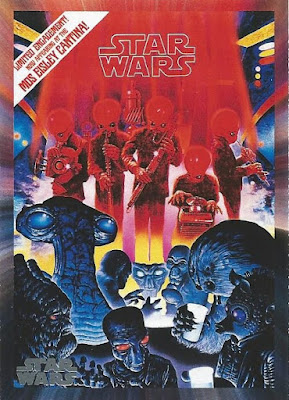 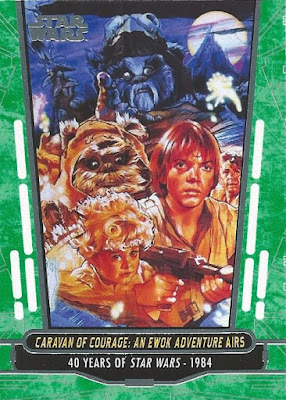 In each pack you get five base cards and a single parallel, typically a green parallel which is the most common.  I was smiling big-time when I pulled this one.  The two made-for-TV Ewok movies from the mid-'80s were absolute staples in my household growing up.  Our home-recorded VHS copies practically got worn out.

I'm not too proud to admit that as a grown adult I own both films in my Amazon Video library.  Possibly my favorite card in the entire blaster right here based on pure nostalgia alone. 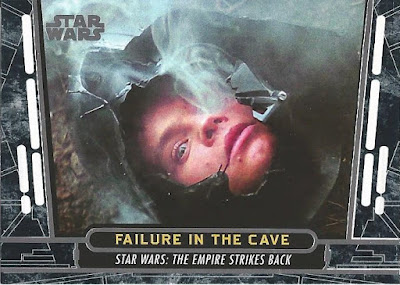 Some of the cards towards the beginning of the checklist do simply feature famous scenes from the films. 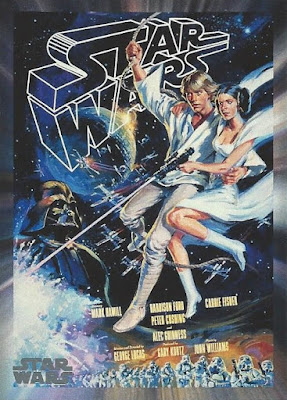 While not particularly accurate (especially with respect to Princess Leia), how cool is the artwork on this one?  I love the small details like the row of Storm Troopers along the very bottom. 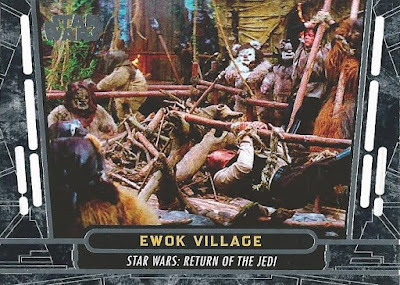 As a kid, Return of the Jedi was my favorite of the original trilogy, just because I was young enough to really like the Ewoks (though I can understand why older Star Wars fans may have been turned off by them).  I mentioned this in the pack of this stuff I posted back in 2017, but my brothers and I just about wore out our VHS copy of this back in the day, same as we did the Ewok films. 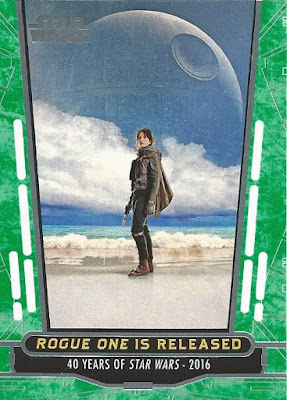 Here's another green parallel, paying homage to the release of Rogue One back in 2016.  I saw this film in the theater with my wife and thought it was a good effort by Disney.  Much darker and with more of a "war movie" feel than other films in the genre in my humble opinion. 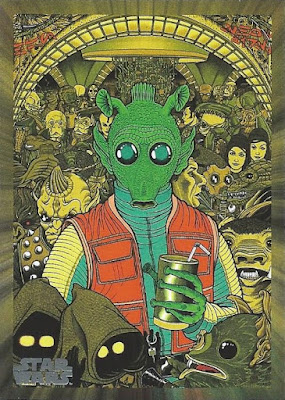 Best artwork in the blaster?  Yep, I'd say so. 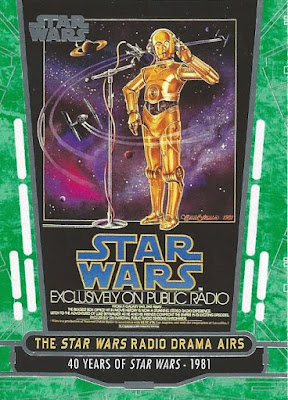 When I ripped some of this back around its release date I learned about the Star Wars radio broadcasts, and this time around I pulled the green parallel of that same card.  In the two years that have passed since that first hanger pack of this product and today's post, I purchased all three broadcasts on Audible, and have listened to each of them. 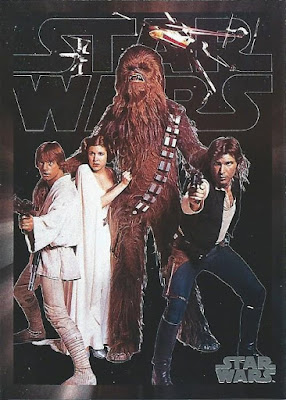 Simple, but effective design here.  I like the minimalist aspect of this one in contrast to a lot of the "busier" artwork cards. 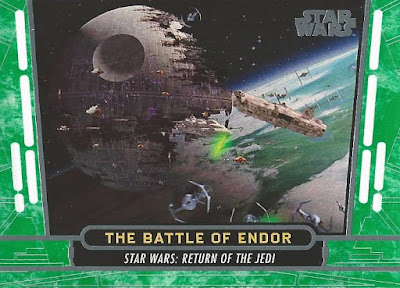 Was pumped to pull another card of my favorite film in the franchise from childhood.  Plus the green parallel works well on this one with the largely green planet of Endor in the background of the action. 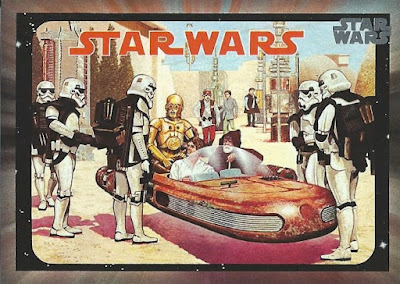 Here's a cool one.  According to the back of the card this was a design used on a lunch box in the late '70s.  I would have brought this lunch box to school with some serious pride as a grade schooler back in the day.  Hell, I'd probably turn some heads bringing my lunch to work in this now as a 37-year-old! 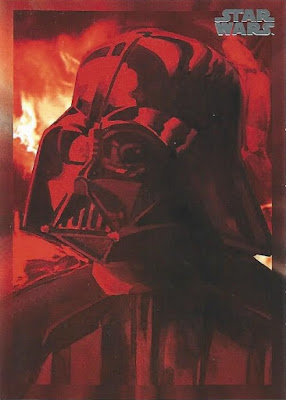 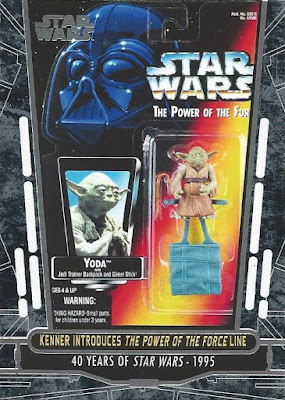 While it would have been more appealing to me had I pulled a card featuring one of the Star Wars toys from my youth, this still evoked the same feeling of nostalgia in me.  My brothers and I had quite a few Star Wars figurines growing up.  Another example of this set really covering all aspects of the Star Wars universe, not strictly the films. 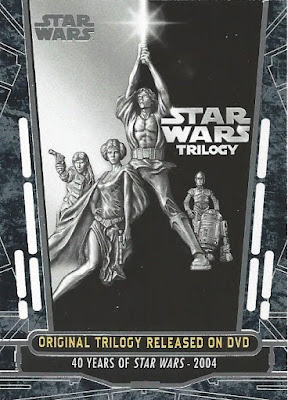 This one made me chuckle, because I had this exact DVD boxed set maybe a decade or so ago.  I sold it when I upgraded to the Episodes 1-6 Blu Ray boxed set a few years back.  That will probably be the last round I purchase in physical format, as Blu Ray finally fully succumbs to streaming services over the next few years. 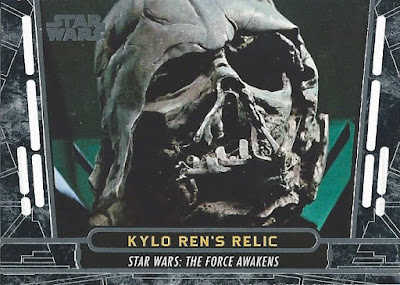 I chose to feature this one because I thought it was one of the more striking images from the recent run of Disney films. 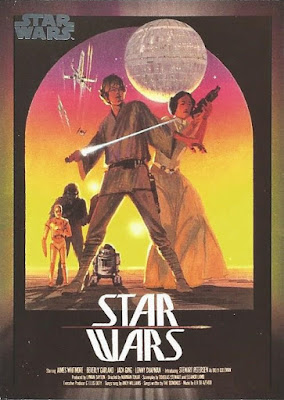 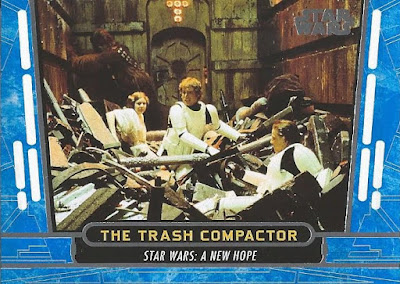 While the green parallels are the most common, you get a single blue parallel per blaster (or hanger pack) if memory serves.  I'm happy that mine at least featured an iconic scene from the original trilogy. 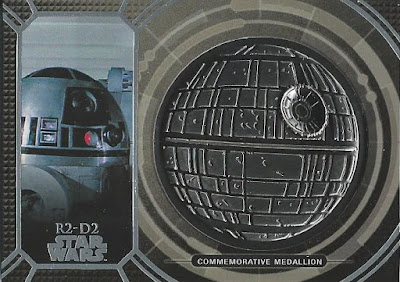 Finally, as promised, each blaster comes with a commemorative medallion.  I landed R2-D2 with a death star medallion.  These medallions seem pretty popular on the secondary market, with available copies of most on COMC going for $10-$15 or more.  Maybe I'll sell this one someday if I ever get around to sending a box of cards in for my port.

So, that's a wrap with respect to this blaster of Topps Star Wars 40th Anniversary.  A fun little set for sure.  I should also note that there were buybacks included in this release, though I'm not sure it's even possible to pull one from a retail blaster like this one.

I'm certainly looking forward to the finale of the 9-episode saga later this month.  I'll be catching it in the theater for sure.

I'll be back with actual sports content tomorrow, in the meantime thanks for stopping by!
Posted by shoeboxlegends at 3:45 PM

I kind of hate what Disney has done so I skipped this set totally...but I need to find a copy of the card showing the figure. I collected action figures before I collected cards, though I'm mostly retired now (since 2007), the nostalgia factor is still there. I can still remember the day we found the new line for the first time, in summer 1995...it was at a Montgomery Ward, of all places.

Very excited for the release of From His Nap--and, yes, that is what I will always call it, no matter what fake name they give it! In the meantime, The Mandalorian really is quite good, even if much of the appeal is just the awesome child-who-is-of-the-same-species-as-Yoda.

Fun set! I completed it a year or so ago, but need to spend some quality time flipping through the cards sometime.
We just booked our tickets to catch the new film on Christmas Day.. looking forward to it!

Those are some great looking cards - love the variety! Now I'm hoping Droids and the Ewok movies will be available to stream on Disney+ someday!

Thanks for posting I hadn’t seen base cards from this set.

As a 47 year old... I owned that lunch pail... and totally brought it to school with some serious pride :)