This week's action should be very interesting, as the 10-2 Patriots host the 8-4 Chiefs at Gillette Stadium in Foxboro, MA in the second slate of games.  New England might be the most questionable 10-2 team of all-time, and they've largely been winning despite the offense as of late.  If this game were in Kansas City I'd be betting on the Chiefs, but being in New England it's closer to a coin flip if you ask me.

For the football card project, I'm getting back to featuring New England's opponent this week, with a Chiefs card from the late '60s... 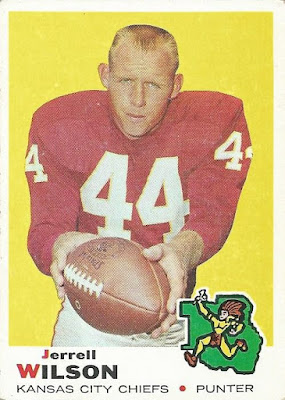 This is actually my third card from the 1969 Topps football set now, which is somewhat amazing given how few football cards I own overall.  While not that aesthetically pleasing, I tend to lean towards obtaining cards of kickers and punters for some reason.  Also, if you think the Cleveland Indians' "Chief Wahoo" logo is insensitive, check out what the Chiefs were rolling with during this era.  Give them some credit I guess for being ahead of the curve in switching to their current arrowhead logo?

As for the subject of the card, Jerrel (single 'L', mis-spelled by Topps here) Wilson was with the Chiefs for 15 of his 16 professional seasons.  He was one of the better punters of his time, with multiple Pro Bowl selections, and is actually enshrined in the Kansas City Chiefs Hall of Fame!  I didn't know this when I grabbed the card, but it turns out this is his rookie as well.  Not too shabby for 73 cents, thank you COMC! 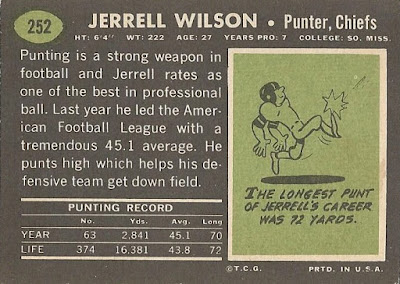 I've probably mentioned this before but I absolutely love the backs from this set.  I can't think of too many (any?) other cases where a company went with a solid black background on the reverse of a card.  It really, really works well with the white text and the green ink used for the card number and inset box for the cartoon.  Sharp, clean, and easy on the eyes.

The write-up reinforces what I mentioned above about Wilson being one of the top punters in the game at the time.  Love the cartoon too, a 72-yard punt is pretty damn amazing.

So, there's your football card for this week.  Just three weeks more to finish out the season, at which point I plan on reviving my Signature Sundays autograph posts in place of these football-themed ones.

Enjoy the NFL action today football fans, and thanks as always for stopping by!
Posted by shoeboxlegends at 9:50 AM

Played his last yr with Pats

I've never seen that Chiefs logo before. Wilson sounds vaguely familiar to me and if he's in the Chiefs HOF he must have been a heck of a punter!