After a scan-heavy, intensive effort yesterday I'm a bit burned out and need a quick-and-dirty post today.  The fix for that?  Time for the next post in my slow crawl towards a 1950 Bowman baseball set.  It's once again a Red Sox subject today... 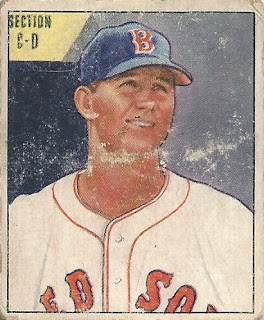 This beat-up beauty features pitcher Joe Dobson.  Right off the bat I'll say that this one is in worse shape than I'd typically like to see out of my cards from this release.  It's probably the only card I've featured from the set so far that I'd like to replace someday.  I ended up with it though because I plucked it for the insanely low price of 50 cents at a card show back in 2012.

Though he was named an All-Star only once (1948), Joe had a distinguished career on the mound.  He spent the bulk of his career with Boston, and won over 100 games in a Red Sox uniform.  Overall he racked up 137 wins and a career ERA just a touch over 3.50.  In a sure sign of a bygone era, he pitched a whopping 112 complete games, including 22 shutouts.  Like our last subject in this series, he's inducted in the Boston Red Sox Hall of Fame! 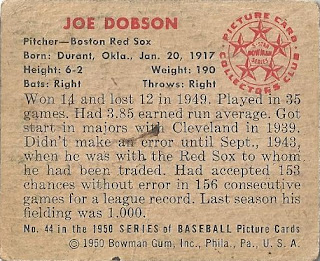 As the back of the card indicates, Joe was known as a top-notch fielder.

Aside from his baseball accolades, Joe served with the United States Army for a couple of years towards the end of WWII.  Also of note, Dobson lost his left thumb and left forefinger at the age of 9 due to a run-in with a dynamite cap!  He was a right handed pitcher of course, but it's still interesting to me that he was known as a phenomenal fielder despite being down a couple of digits on his glove hand.

Though I intend to replace this one someday, it's a welcome addition to my set build for the time being.  Up to a baker's dozen now from this set!