In the 14th game of their season, the 10-3 Patriots head west to face the 1-12 (ouch!) Cincinnati Bengals, with kickoff in just a few minutes here.  It's hard to get excited for this tilt, even as a Patriots fan, as the team has looked completely uninspired on offense lately.  On top of that they managed to get embroiled in yet another video taping controversy this past week, and I'm also generally distracted with the holiday season in full swing.  I'm not sure how much of this game I'll even get to see.

As far as the football card project goes, I can't think of many Bengals cards I'd be excited to add to my collection for this series, so instead I went completely off the wall and landed my first card from a set I've long admired... 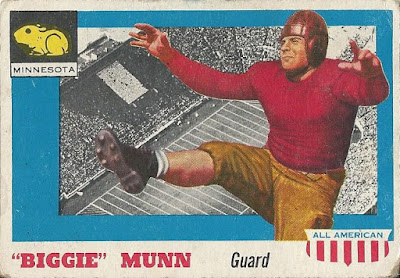 Featuring collegiate athletes of the past from across the country, the 1955 Topps All-American football set is easily one of the more aesthetically pleasing vintage footballs sets ever produced (in my humble opinion anyway).  I love the design of the full color player photo over a black-and-white background, and of course the awesome college logos that can be found in the set.

For my first (and likely only) foray into this release I settled on Clarence "Biggie" Munn.  Munn was captain of the Minnesota Golden Gophers (again, sweet logo) football team in his senior season, the same season he'd be named All-American.  If you're confused, as I was initially, as to why he's listed as a guard yet appears to be punting, it's that he played both positions.  In fact, he was widely regarded as the top punter in the country during much of his college career.

The helmet, the punting pose, the Golden Gophers logo, and that fantastic nickname; what's not to love about this card? 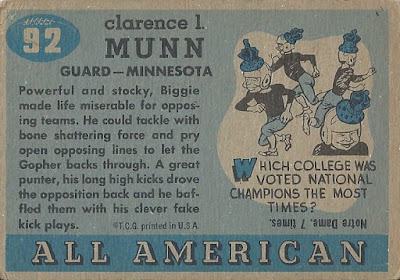 The backs of these over-sized beauties have a really pleasing layout as well.  Forget the stats, instead we've got a nice write-up, easy to read numbering scheme, and plenty of room for a large cartoon.  All of that in black and blue ink that's pleasing to the eye.

In the end, I'm happy that I stumbled across this one during a sale on COMC for the very reasonable price of $1.50.  It's certainly one of the more unique football cards in my collection, and quite possibly my favorite overall card to come out of this weekly experiment.

Just two games to go after today, and after that you probably won't see a football card on this blog for a good long while.  Enjoy the NFL action today everyone, and thanks for stopping by!
Posted by shoeboxlegends at 12:55 PM

Awesome card! I really need to add at least one of the Stanford Cardinals from this set to my collection at some point.

That All-American set has been one I've long admired, but it's generally pricey given that I have no major college affiliation and no PC guys in the checklist. For that kind of price, though, I might just buy some appealing random common like this.