I wasn't planning to build the 2010-11 Upper Deck hockey set, and I'm not sure that's changed, but on Friday night I did pick up one single pack at the local shop for $3 just to see how the cards look in person. 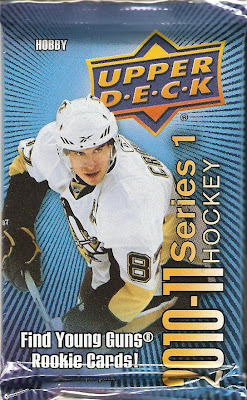 I've collected the Upper Deck base set for the past few years since I got back into collecting, but kind of got bored with it after last year's set. $3 gets you 8 cards, this turned out to be an extremely good pack: 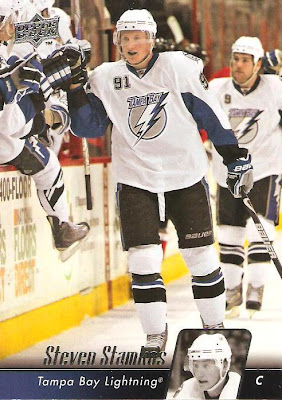 #21 - Steven Stamkos - Can't get a much better first card than this. Stamkos is the most exciting young scorer in the league at the moment. After scoring a league-leading 51 goals last season (along with Sydney Crosby), he is leading the league in both goals and points so far this year. 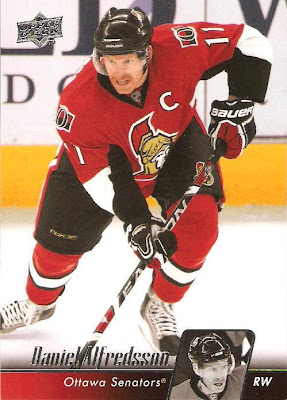 #63 - Daniel Alfredsson - Alfredsson is still putting up good numbers as a 37-year-old. He's been good for about a point per game over his career and registered his 1,000th career point earlier this season. 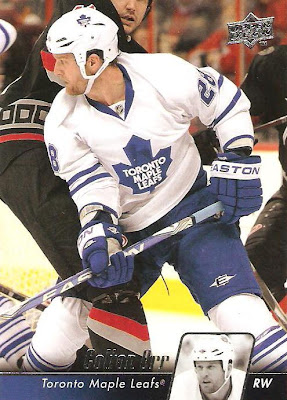 #19 - Colton Orr - I have to say that these cards actually look really good. I was excited about collecting the Score set this year but these look so much nicer, although they are priced much differently in all fairness to Panini. I didn't purchase so much as a single pack of Upper Deck's baseball release this year, so this was my first real exposure to this design. I think it works much better with the hockey set. 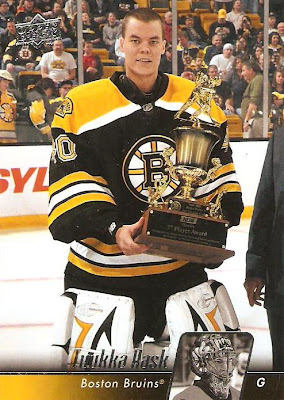 #183 - Tuukka Rask - Every Bruins fan, myself included, thought Rask would be the man between the pipes the majority of the time for Boston this season, after he led the league in both Goals Against Average and Save Percentage last year. His 0-4-1 record over his first 5 appearances though, combined with the fact that Tim Thomas has been an absolute beast (10-1-1, 1.49 GAA, .954 save percentage!), have resulted in little playing time for Tuukka. He did post a shut-out in his last start against the Panthers on Thursday night. I love the photo on this card depicting Rask being presented with the NESN (Bruins TV broadcast) 7th Man Award. 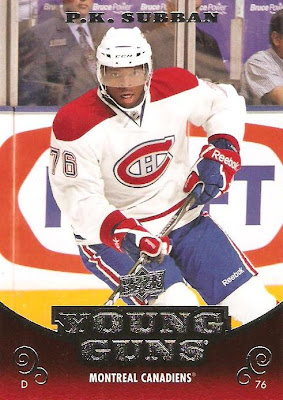 #231 - P.K. Subban - Young Guns Rookie - I couldn't believe it when I shuffled Rask's card to the side and this one was revealed. Subban is causing quite a stir in the hobby, and in the media as well. Just last night on Hockey Night in Canada we heard Don Cherry as well as Mike Richards of the Philadelphia Flyers commenting on Subban's lack of respect for the game. All I know is he looked pretty damn good against the Bruins last time they played. This card is consistently selling in the $30 - $40 range on eBay. I'm very tempted to flip this for some vintage hockey on eBay, since I have a feeling this card might drop a bit in value over the long run and don't plan on collecting this set, but I'm still not sure what I'll do. 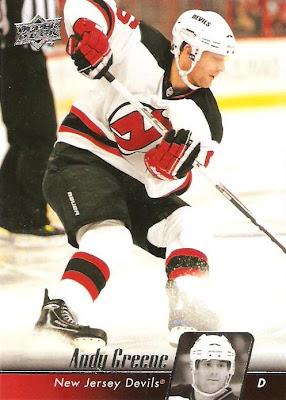 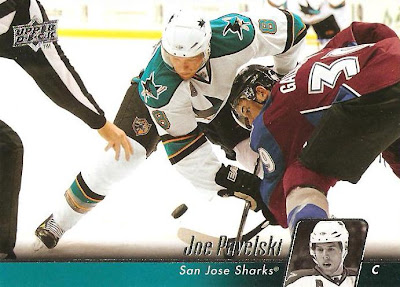 #36 - Joe Pavelski - After a phenomenal playoff performance, Pavelski has cooled down some but is still posting decent offensive numbers so far this year. 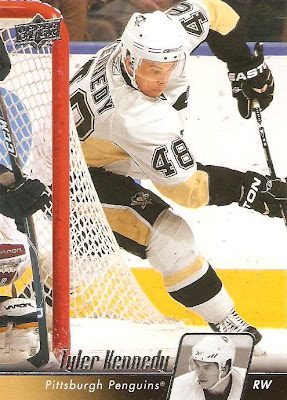 That wraps it up. I'd say that's about as good as I could hope to do with just a single pack of Upper Deck! The odds of purchasing just one pack and pulling a Subban rookie are pretty low to say the least. Stamkos and a nice Rask card put this one over the top for me.

That being said, I just don't need another set to collect right now. If anyone wants to trade me a Krejci that would be great. I might even pick up another pack here and there, but no hobby boxes for me.
Posted by shoeboxlegends at 3:38 PM

I'm thinking some not so nice words right now.....

congrats is not one of them, but congrats nonetheless. ;)

I might have some vintage hockey you might like. I'm building the 2010-11 Upper Deck set. Bought 3 boxes (haven't opened them yet), and would love to trade you for the Subban if I don't get one. I'll drop you a line...