Here's another recent addition to the collection: 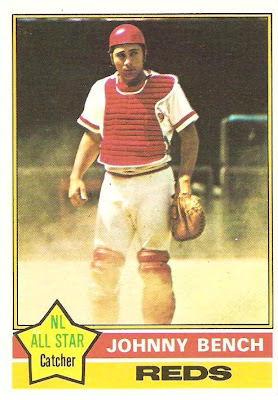 I like the card for another reason though. I know I've said this a few times before, but one of the reasons I enjoy collecting is that my cards comprise a kind of pictoral and statistical history of the game, neatly packed away in monster boxes in my office closet. This card makes me think of Bench's 1976 season. After a sub-par season by his standards, Bench bounced back with an amazing post-season in '76. It culminated in a World Series where Johnny hit .533 with 2 HR and 6 RBI, capturing World Series MVP honors and leading his Big Red Machine to their second straight title. 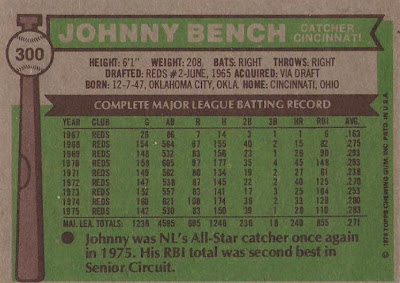 The card's in great shape, off-centered top to bottom a bit but for $6 I was more than satisfied. I picked this one up on the same trip as the 1973 Topps Fisk from a couple of posts back. Two iconic 70's cards of Hall-of-Fame legends for about half the price of a blaster. At this rate I may never buy another card at Target again...
Posted by shoeboxlegends at 11:10 PM

Labels: New to the Shoebox

Nice pickup. I love the back of older cards.

this is my favorite card of all time. not kidding.

Thanks for the comments guys, seems like so many collectors list this card as one of their favorites.