It's time to select another card for The Ultimate Hockey Card Set, a franken-set of my all-time favorite hockey cards. Today we'll induct card #245. The card I selected is one of two that I purchased using the money I ended up with from parting with a few David Krejci cards a week or two ago. Before we get to the winner though, let's look at the two runners-up... 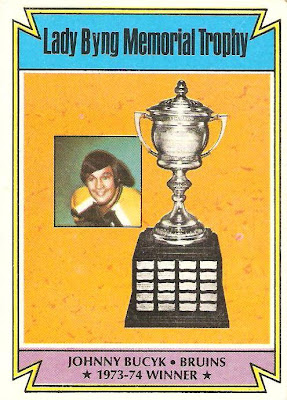 Coming in third place is this Johnny Bucyk Lady Byng Trophy card, which is #245 in the 1974-75 Topps set. Bucyk would certainly be a worthy player to include in the set, and I have a feeling one of his cards will make it in someday, but I'm not wild on the design of the 74-75 trophy winner subset. A small, blurry photo and way too much orange means I'm passing on this one. 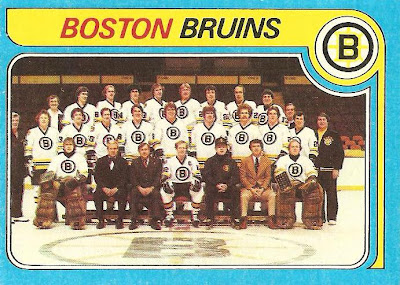 The runner up is another Bruins card, this time from the 1979-80 Topps set. As I've said again and again I'm a huge fan of vintage team cards. The Bruins were nothing special in 79-80 though (in all fairness I wasn't even alive yet in 1980), losing in the second round of the playoffs to the eventual Stanley Cup Champion New York Islanders. Not only that, but I've already chosen the Gretzky and Gordie Howe cards from this set as selections for this franken-set and I'd like to keep it diverse where possible.

Alright, I've kept you hanging long enough. Here's the winner, one of the most exciting recent additions to my hockey card collection: 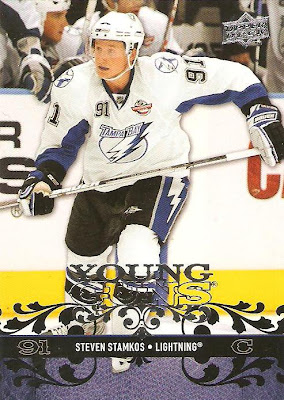 So far this year things have basically been the same for Stamkos. He's currently sixth in league scoring and is just a single goal behind Phil Kessel (who should be cooling off at any moment now) for the league lead. He's got as good a shot as anyone at capturing another Maurice Richard Trophy this season. Without question Stamkos is one of the new faces of the NHL.

Aside from being one of the game's most prolific scorers, the Lightning's sniper is also one tough hockey player. The fact that he returned to game 7 of the Eastern Conference Finals against Boston after catching a vicious puck to the face earned him more respect in my book than any of his many highlight-reel goals. 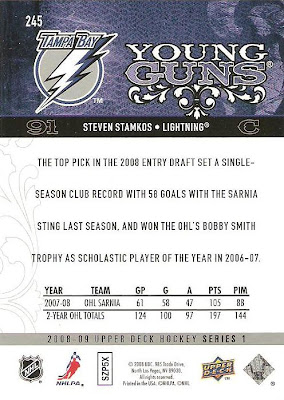 Steven Stamkos is truly a superstar and a class act. He's got top-end talent, is a dedicated hard worker, and plays the game the right way. I think we all have those players who we root for any time they're not playing our favorite teams, and for me Stamkos falls into this category. I would love to see this kid (remember he's still just 21) win a Cup someday. In the meantime, I'm psyched to have his rookie card in my collection.

The Ultimate Hockey Card Set, which is now up to 10 cards and counting, can be viewed here.
Posted by shoeboxlegends at 8:45 PM

Good call on this one. Not as close for me as it might be for others. In the next few years it will be interesting to see if Stamkos can keep pumping in 50 a year.

A good kid, I certainly am hoping so.

Great choice. If I'm not mistaken stamkos also played most of the playoffs with a bad shoulder. As in a possibly broken collar bone.