At long last I have completed the 264-card 1974-75 Topps hockey set!  This set surpasses '79-80 Topps as the oldest hockey set that I've managed to finish off.  Here are the last two cards that I needed at the end, which are now at home in the set binder with their 262 friends: 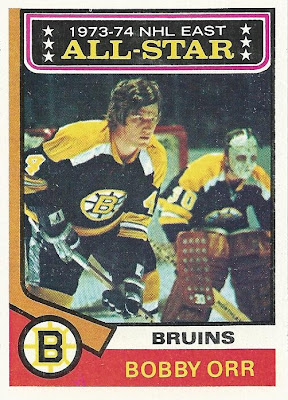 An awesome Bobby Orr All-Star card.  I like this one way better than his base card in the set, really nice to see an in-game photo among the sea of posed portrait shots that compose most of the set. 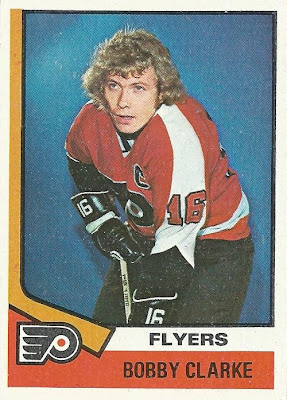 The other card I was in search of at the very end was Bobby Clarke's base card.  Not the most exciting cardboard square, but it is significant in that Clarke and the Flyers were at the height of their '70s success when this set came out.

I actually started this quest when I picked up a random lot of these cards on eBay way back in the Spring of 2009.  Finally, nearly four years later, I can put this one to rest.  This was a really fun set to hand collate just because my cards came from so many different sources.  Everything from eBay, to Sportlots, to Check Out My Cards, to trades with other bloggers and collectors, to the local hobby shop, to card shows helped me to complete this one.  Collecting all these little squares of cardboard from all over the globe and assembling them in one binder, in order, felt very rewarding and gave me the kind of satisfaction that set building is all about.  A huge thank you to the many bloggers out there who helped me with this one over the past few years.

Congrats on the finished set! And you are definitely right about it being fun to hand collate a set and get them from all kinds of sources. It makes the hobby more enjoyable.

Congrats on completing that set. One of my faves also one of the first ones I got some cards from but not the very first that would be the 72/73 Topps. Maybe one day I will complete those.

Congrats on completing the set. I too agree with the hand collating of a set. I'd rather do that than buy the set complete. No sense of accomplishment that way.

Congrats on getting that done! You've been after it for a while. It's nice to finish something off with a nice-looking Orr, too!