Just a quick one card post today, featuring what was probably the best hockey card bargain I got on COMC over Black Friday weekend: 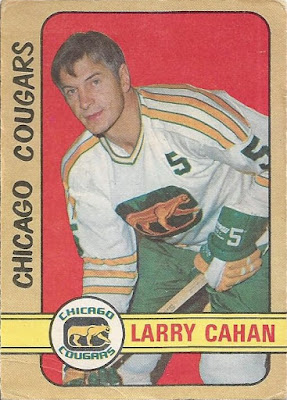 During the 1972-73 season, O-Pee-Chee included some cards from the newly founded WHA in their flagship hockey release.  This was the only year of the WHA's existence where O-Pee-Chee mixed the WHA cards in with the NHL cards in the same set; going forward the WHA would receive its own separate release.  These are tough to find in general (and even tougher to find at a reasonable price), due to the fact that they were included in the much rarer third series print run of the set (cards 210-341).

I've had three of these in my collection that I showed off on the blog a few years ago now, Jean Payette, Norm Beaudin, and Bobby Sheehan.  Larry Cahan was the best deal I've gotten on one of these by a long shot though.  Sure, the corners aren't perfect and there are a couple of wrinkles along the bottom edge, but these cards are so tough that all I look for is one that's visually appealing and decently centered if I can help it.  I was absolutely astounded when I found this one listed at 78 cents, and snatched it up immediately.

As far as the subject, Larry Cahan was a physical defenseman who began his professional hockey career all the way back in the late 1940s!  He finally made his NHL debut with the Leafs in 1954, and wound down his career just about 20 years later with the Cougars of the WHA, the team he's depicted with here.  Unfortunately, he was one of the two players who laid the combined hit on Bill Masterson in 1968 that resulted in his death. 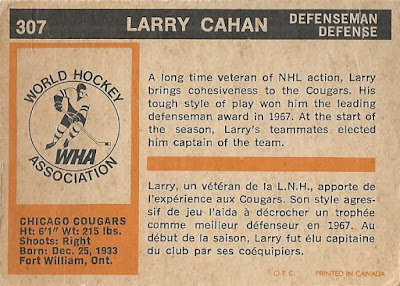 Here's a look at the back.  I wish O-Pee-Chee would have put the team logos on the reverse for this subset, instead of using the WHA league logo.  Other than that though, a pretty fantastic vintage hockey card if you ask me!

I think I'm going to get off my butt this year and finally begin chasing after all of the WHA cards from this release.  It won't be easy, and I doubt if I'll ever find another for less than a dollar like this, but it will be a fun project as I really enjoy learning about the teams and players of the "rival league".  I did manage to use some expiring eBay Bucks last week to secure a few more of these...coming soon!
Posted by shoeboxlegends at 2:20 PM

Terrific card. Love the long lost WHA stuff. I remember when the Aeros beat them for the AVCO Cup. They had great uniforms.

YES!!!! I remember going to I think a Cougars preseason game or something back at SIA (Southwest Ice Arena in Crestwood). Still have the hockey stick somewhere the player gave me and my brothers.

Oh man that's awesome Jeff! If you ever find the stick I'd love to see a photo.

That is an awesome card!!!

Wow, I'm very weak when it comes to O-Pee-Chee. I never knew the WHL cards existed. I did collect the Topps set that year. I only vaguely remember the Cougars.

Awesome. Loved the Wha. Except when they stole some of my favorite B's

Wow, that's a decent price for any 1970's OPC, but for this card? That's quite the find (and I'll admit I'm disappointed I didn't find it myself).

Back at the time, the Cougars' top (only?) farm team was the Long Island Cougars. My father and older brother went to some games, but I was too young and (at the time) disinterested in hockey... but I still have a soft spot for the Chicago Cougars because of the local connection.